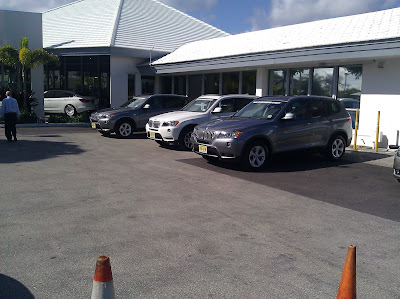 My all time favorite is the BMW M5, both the E39 version and (to some grudging extent) the E60, specifically for the high revving 5.0 V10. There are, of course, others that drew my eyes but the X3 SAV (Sports Activity Vehicle) was never one of them. Let’s face it, I’m sure most BMW faithful let out a collective ‘WTF!?’ when BMW first introduced the mini-X5 in 2003. Why would anyone buy that when a 3 Series wagon offered more space and, above all else, was more fun to drive? I did drive the X3 once in 2007 after BMW lamented and softened the stiff-legged ride but even then, it just never appealed. The ride was still rubbish, the interior quality was questionable and, in my opinion, it just never made sense. Nevertheless, the X3 became and a sales success and as a result, other manufacturers have been scrambling to bring their compact luxury crossovers to market (it must be said at this point that the Lexus RX was the true originator of this class). Now in an effort to stave off the competitions, BMW has released a new X3, larger than the model it replaces to create space for the new X1 while still relatively smaller than the top rung X5. I recently had the opportunity to test drive the new X3 and compare it to some of its main segment rivals, courtesy of the BMW X3 Difference event. 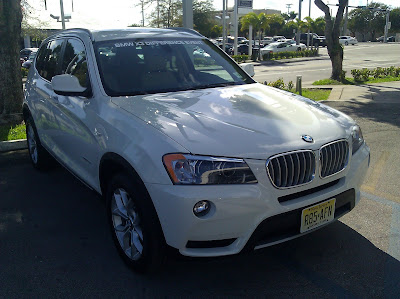 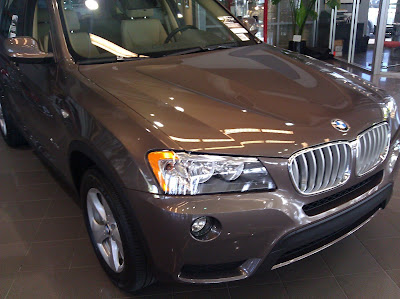 I was reacquainted with Brian Owen (those of you who keep up with the blog will remember he was the chaperon for the 2011 Hyundai Equus) who was responsible for divulging information relevant to the new X3. Without getting too technical, the slightly larger X3 has been given a complete overhaul, riding on a modified platform from the 3 Series, dubbed F25. Power comes from two versions of the venerable 3.0 liter inline six cylinder engine, the first powering the oddly named X3 xDrive28i comes in the N53 naturally aspirated unit with 240hp. The most powerful version being the xDrive35i comes equipped with the N55 turbocharged inline six putting out 300hp. Both engines are mated to BMW’s new 8 speed automatic transmission which promises gains in fuel economy. The larger size means gains in interior volume, notably rear leg room as well as cargo volume behind the rear seats, which was something of a negative point in the old X3. The interior materials have seen a substantial upgrade with soft touch leather lining the dash and real aluminum trim accenting the center console. BMW’s customary iDrive system is standard in all X3 models and, though panned for its general lack of user-friendliness in earlier versions, the latest software has been thoroughly reworked to be more easily understood and controlled (redundant buttons surrounding the rotary knob aid in quick access to often used functions such as radio tuning and navigation input).

Anyway, I’m here to drive so let’s get to it. 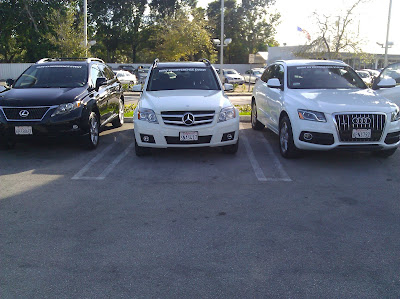 Three of the BMW X3’s primary competitors were on hand for comparison: a 2011 Lexus RX350, 2011 Mercedes GLK350 and a 2011 Audi Q5. Due to time constraints (and also because I know BMW focuses more on performance) I never bothered driving the Lexus. Let’s face it, if you’ve driven a Camry (not the SE trim) then you have a basic idea of what to expect when you drive an RX: a simply serene, quiet and isolated ride in typical Lexus comfort and luxurious appointment. Which means what? Don’t expect any form of sporty flair in this luxury crossover. The RX skews more to the comfort end of the spectrum and Lexus makes every effort to isolate the driver from the driving experience. There’s a reason why the RX is perhaps Lexus’ best selling vehicle to date and it has to do with the bones that its based on (that being the best selling mid-sized car in America, the Camry). 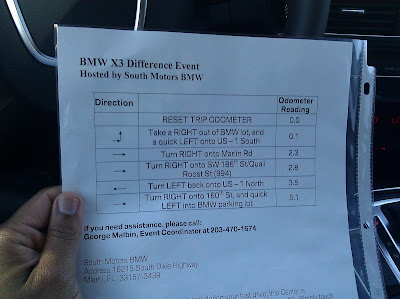 A little about the test route: it was just over 5 miles long and was mostly surface streets. I was a little disappointed because the M3 event I attended a few years ago had a similar setup but the route was over 10 miles and consisted of backroads, a highway stint and provisions to test the car’s dynamic abilities. Clearly I had to improvise to put these vehicles through their paces (not to mention the route was slightly incorrect anyway). 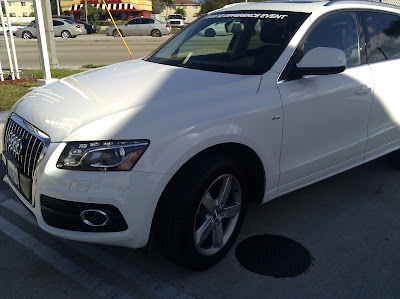 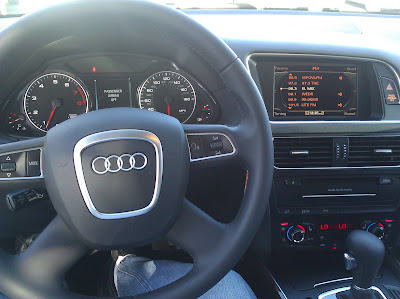 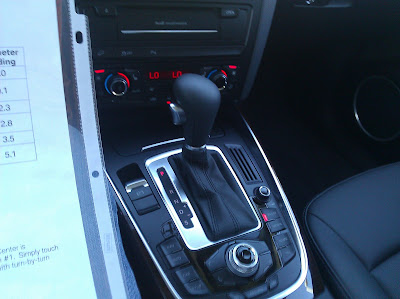 First up was the Audi Q5 equipped with the venerable 3.2 V6 producing 270hp directed through Audi’s Quattro AWD system via a six speed automatic transmission. On the road, the Q5 felt composed, planted and solid, yet offered a comfortable ride. The V6 was punchy, offering great acceleration both off the line and mid-range. The transmission offered manual control and stayed in gear without upshifting while also being very responsive. Audis are known for their great interiors and this Q5 upheld this belief, offering quality materials and a luxurious yet simple and functional cabin. The seats were at once comfortable and supportive, holding me in place during aggressive driving. Audi’s MMI user interface system proved difficult at first but within a few minutes, I understood most of the functions. The steering was also very linear and responsive, dialing in the right amount of assist and firming up when necessary. As far as exterior looks, the LED lighting in the headlights go far in giving the Q5 an upscale look and the entire vehicle has a sporty flair to it. Arriving back at the dealership, I pulled in thinking to myself, “BMW had better bring it. The Audi is going to be VERY hard to beat.” 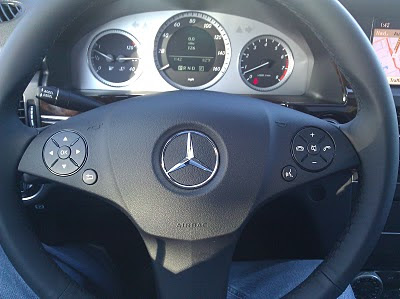 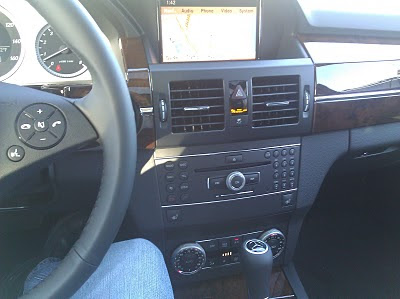 And it was, sort of. But let’s not get ahead just yet. I’ll admit, the Mercedes Benz GLK’s styling is off-putting for me and as a result, I drove the X3, BEFORE the Benz. I’ll dispatch the review of the GLK before moving to the X3. When I think of a Mercedes, the first thing that comes to mind is “made of granite.” Mercedes vehicles are supposed to give you that solid feel whenever you’re in them. This one did to some extent, but the general feeling was lacking compared to the Audi and the BMW. Out on the road, the Benz felt more Japanese than European. The steering offered too much play and assist in its actions, the ride, while comfortable and perfectly acceptable, skewed more towards the Lexus than the other Germans. Dynamic responses to the helm were slow and body roll was excessive where the Audi and BMW were composed. To be fair though, the Mercedes COMAND interface was very intuitive and simpler to use than the Audi MMI or BMW iDrive systems. I’d definitely recommend the GLK were a person in the market for a Lexus RX. 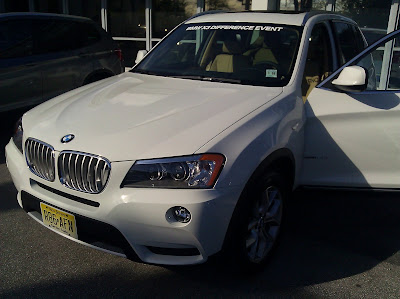 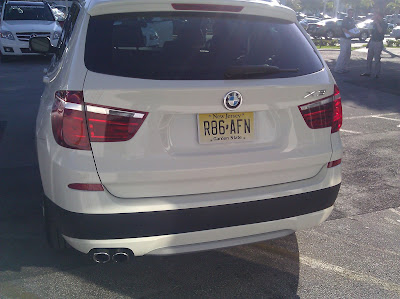 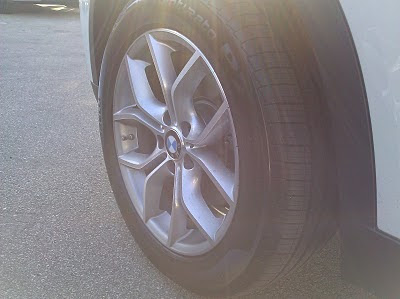 Looking at the X3, you know this is a BMW. Styling is similar to the larger X5 and while the X3 has grown somewhat, it’s very difficult to tell. The cabin gives a dynamic, yet cozy feel and interior quality is just about on par with the Audi. The one negative about the interior is the lever for the eight speed transmission. Why BMW insists on making a simple change from ‘P’ to ‘D’ such a chore is beyond comprehension. After startup, in order to engage Drive, the driver must first push a button on the side of the lever which supposedly unlocks the transmission and then pull the lever twice for ‘D’. The driver must then confirm that Drive is selected by looking at the driver information screen between the primary instruments. Selecting Reverse is even more frustrating (took me six minutes with the help of one of the BMW reps to select ‘R’) and once you’re parked, you engage Park by pressing a button on top of the lever. There’s no tactile feeling in the lever and, for an automaker that builds its reputation on performance, this is a glaring mistake in an otherwise complete package. 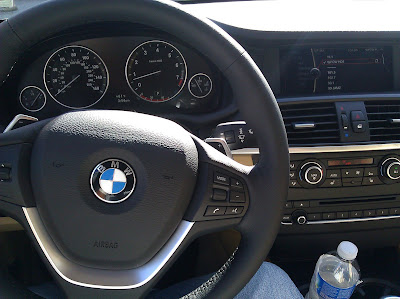 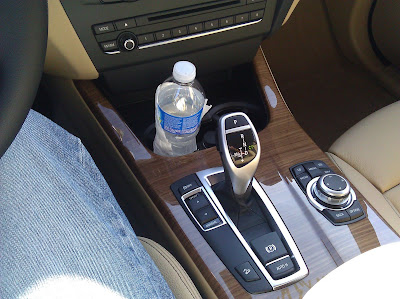 On to the drive. The X3 I drove was the xDrive35i version and as such came with 19 inch wheels and four drive settings: Comfort, Normal, Sport and Sport+, the former being the cushiest setting and the latter (as the name probably suggests) being the most aggressive. I tried Sport and Sport+ first and was met by a machine that was engaging, responsive and utterly BMW. Body roll was quelled, the transmission was responsive, “learning” what mood I was in and responding accordingly. It seemed the whole vehicle was in tune with my desire to play. After a romp through some back roads, I tried the Comfort setting and waited for the X3 to settle down into cruise mode, but it never really did. Where the Audi was settled yet responsive, the BMW never truly relaxes: gear changes were still felt, the ride was still a tad firm and the steering was still fidgety (tracking straight ahead took minor steering corrections). Normal mode I suspect enables the driver to mix and match different vehicle settings to his wishes, a useful feature through BMW’s iDrive interface. While earlier versions of iDrive were panned and blamed for ruining ownership experience (and sending stress levels through the roof), this latest version (standard on all X3s) proved very intuitive and user-friendly, barely beating the Audi system.

So to pick a winner.

For a perfect mix of comfort and sport, the Audi Q5 barely wins. It offers a comfortable ride for road trips, yet is responsive and dynamic when the driver feels..err…naughty. Interior quality is largely unmatched by anything else in the segment although the BMW does close the gap considerably.

The BMW X3 is the driver’s choice. On the road it feels smaller than its size suggests and the twin turbo engine is torque rich and responsive in nature. The new X3 is a distinct improvement over its predecessor and will no doubt prove as much a success as the last X3.

I wouldn’t look twice at the GLK or RX. I’m an enthusiast and these two just never acquitted themselves well in this company. To put it another way: my mother would hate the BMW, be OK in the Audi, like the GLK and LOVE the Lexus.

As for me, I’d take the Audi over the BMW…but just barely.