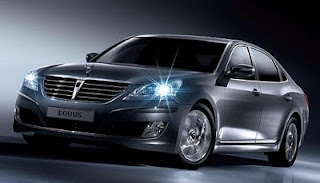 Well, prepare for a reality check.

Unless you’re living under a huge boulder you’d hear about how Hyundai, the carmaker previously known for cheap runabouts that sold more on price rather than quality (understandably so given such “outstanding” examples as the SCoupe), has been on somewhat of a rise within the last decade. One need only look at a current issue of Consumer Reports (or even just Google it) to see the raft of substantially new and higher quality vehicles Hyundai has been cranking out. The just released Sonata has risen to become the visual standard by which all mid-sized sedans are now judged, while offering the most powerful duo of engines in the segment AND being the most fuel efficient in the class. Pretty substantial stuff.

But that isn’t all. Hyundai has now set it sights on moving its products upscale and it started this march with the released-for-2008 Hyundai Genesis. Starting in the mid-$30k range, the Genesis is a large rear wheel drive sedan that offers many standard luxury items that would be options on such vehicles as the BMW 5 Series. All of this for about $30k less than what you’d normally pay for had you gone to the Lexus dealership across the street. The Genesis looks the part, offers power parity with a duo of engines to choose from (a 290hp 3.8 V6 or a 385hp 4.6 V8) and comes with Hyundai’s outstanding 10 year, 100k mile warranty. But if you thought they’d stop there, you obviously don’t know Hyundai. No worries, neither did I. 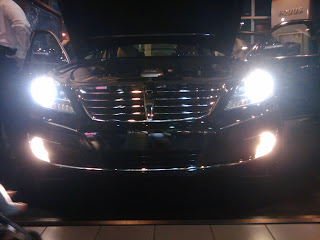 It wasn’t enough that Hyundai targeted the luxury midsize segment with the Genesis. Now they’ve gone for the top player with the new for 2011 Hyundai Equus. Starting at just under $50k, the Equus plays the same game as the Genesis, offering quality, features and roomy, luxurious accommodations on par with the best of the name brands at a price that even mere mortals can afford.

I was invited to a local Hyundai Dealership (thanks to Christopher Hayek and Brian Owens) to get an up close look at the Equus and ask the questions that you, the consumer, might have regarding both the car and Hyundai itself (sorry, wasn’t allowed a test drive due to this particular Equus being the only one available). On first glance, the Equus is huge vehicle, a few inches longer than a base LS460 and about equal to the Mercedes S550. Width is about the same and is very roomy inside. The Equus is available in two trims: Signature is the base model (although gazing inside, ‘base’ wouldn’t be an appropriate word to use here) and provides seating for five, while the Ultimate trim is geared towards customers who would rather be chauffeured around and provides executive seating for two in the rear. In this trim, the rear seat directly behind the front passenger is fitted like a recliner with a foot rest, although despite the Equus’ long wheelbase, the recliner is only suitable for kids (or as Brian put it, Koreans). In all fairness, Brian did explain that the Equus was not originally engineered for the North American market (i.e. tall, fat people) so the cramped conditions with the recliner are to be expected. However, he goes on, enough of a business case was made to bring the Equus to North America, in part, because of the stellar success of the Genesis. Well, I certainly won’t question that. 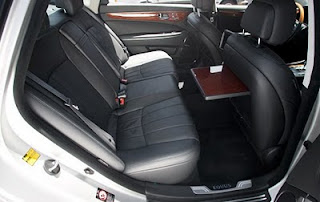 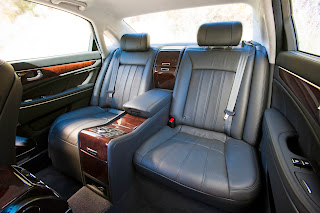 The Ultimate also provides a center console (where the center passenger would normally sit) equipped with controls for the DVD entertainment system, consisting of a flip up screen located between the two front seats. The center console also integrates control for the navigation, excellent sound system and also climate control. There is also a refrigerated compartment that cools bottles of bubbly for your executive passengers (or soda for your kids), plus another storage compartment where the ski-pass through would be. Both rear seats are also heated/cooled. 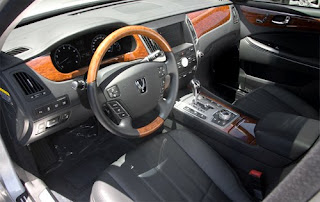 Up front, a BMW iDrive-like mouse controls everything from vehicle suspension setup, to climate control and navigation. All the Equus’ controls are logically laid out and thanks to the almost infinite adjustments for the seats, it’s easy to find a comfortable driving position. Powering the initial batch of Equus sedans is the same Tau 4.6 liter V8 producing 385hp and 335lb-ft of torque routed through a six speed automatic transmission. An upcoming 5.0 liter variant is in development that will provide “in excess of 400hp” as well as an eight speed automatic for customers who think 385hp is a paltry figure (considering the recent strides of the competition, it just might be). 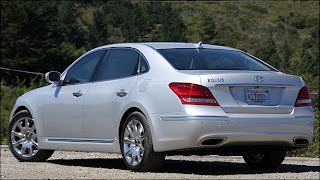 Exterior styling is a mixed bag. The Equus certainly has an elegant yet solid and upscale look to it, even if certain design cues were pilfered (or borrowed depending on your view) from other sedans. There’s a hint of Lexus in the face, a bit of S-Class in the rump, perhaps a touch BMW in the side profile. Whatever the case may be, there’s no denying the car definitely has presence.

I’ve always maintained that both the Genesis and Equus are for buyers who care nothing for badges. All they want is a luxurious, comfortable sedan that caters to their upscale needs…without costing a fortune. The Genesis and Equus add up to just the sort of sedans that will appeal to this set of the buying public. As a matter of fact, several people who were in attendance with me instantly placed deposits to have there very own. This proves that even the well-heeled know a good deal when they see it.

Remember when Lexus first started out as a Japanese alternative to the German status quo? The original LS sedan offered much of, if not all, of what the German sedans offered at a substantial bargain. The Hyundai Equus offers that same value proposition today while at the same time firing a shot across the bow of the established players in the segment. For some, the styling might not be as formative and the interior too generic, but for most the Equus is exactly the kind of vehicle that suits their needs.

Hyundai is also changing the buying experience. Every customer gets a free Apple iPad that serves as both the car’s user manual as well as providing an app that schedules services when such are needed. A technician will pick up an owner’s Equus where ever it may be and leaves a loaner (either a Genesis or another Equus) in its place. The car can either be dropped off when the servicing is complete or, if the owner chooses, he can pick it up at the dealership. Hyundai also offers what they are tentatively calling ‘The 14 Day Rotation”. After the initial introduction and delivery, an Equus specialist will meet with the owner 14 days after (again, at the owner’s home, work etc.) to go over the features of the car or simply listen to any queries the owner might have to ensure he/she is getting and enjoying the full Equus experience.