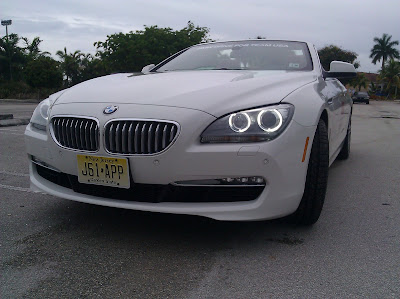 To be specific, I wouldn’t buy a convertible as my sole mode of transport. Don’t get me wrong, they have their place such as in sunny locales like Florida, Hawaii, California etc. But strictly for short leases, such as on a drive through the Florida Keys. On that particular road trip I’ve rented two convertibles on occasion, the first being a Chrysler Sebring which was…not exciting save for the top being down. The second was a Nissan 350Z Convertible which was exciting to say the least. Honestly, the only reason I would rent (not buy) a convertible is if there was a serious dose of sportiness and horsepower to augment the top-down characteristics. BMW has quite a legacy in building sports cars and the DNA is amplified when the Bavarians take a knife to the roof. Thus I was excited to be invited to test drive the newest BMW drop top, the 650i Convertible at South Motors BMW in South Miami. 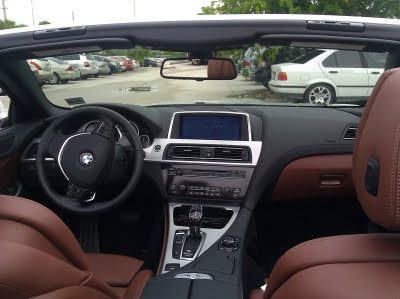 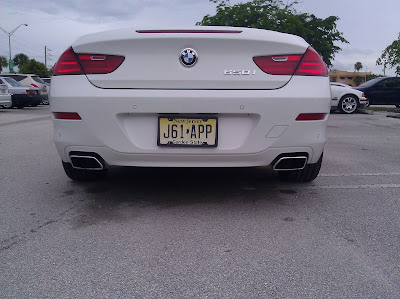 The 6 Series, as you may well have figured out, occupies the space between the mid size 5 Series sedan and the full size 7 Series ultra luxury sedan. The 6 can be had as either a convertible or a 2 door coupe (and beginning in calendar year 2012, as a CLS-type 4 door coupe). Approaching the 6, you instantly recognize that you’re staring at a BMW product. The signature twin-kidney grille is prominent on the front and is framed by the characteristic quad headlamps, themselves framed by angel-eye light circles. A deep chin spoiler leads to a wide opening, to which LED driving lights are fitted at each end. The “face” is at once aggressive and expressive…the word “shark” came to mind quite a bit.

Going down the side, a character line flows just behind the front fenders and leads to the rear where L-shaped LED tail lamps frame the rump. Below the wide bumper, twin square exhaust pipes give the powerful V8 a proper voice. Getting inside, the driver is faced with a 3 spoke steering wheel that’s chunky and leather lined. Behind the wheel are paddles for manual control of the 8 speed transmission and on the wheel itself are redundant controls for the powerful 9 speaker audio system and information screen between the speedometer and engine RPM counter. The much maligned iDrive control system comes standard but has gone through massive improvement that makes the system much more user friendly than when it first debuted almost 10 years ago on the 7 Series. Different menus such as audio, navigation, vehicle information, climate control and settings are accessed via the iDrive “mouse” on the center console. Unlike earlier versions which forced the user to delve into sub menu after sub menu to simply change the radio station, controls are fitted for often-used items so the user need not touch iDrive. 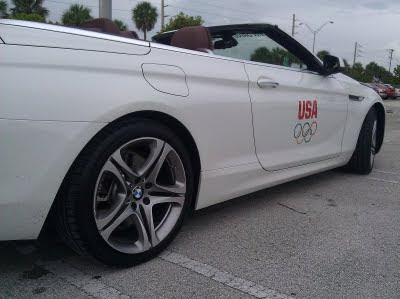 To start the vehicle, the 6 comes with a “key” that the driver only need to have on his person. Once within range, the car recognizes the key and unlocks the door for the driver. Foot on the brake and with a press of the start button, the twin turbo 4.4 liter V8 fires up with a roar and settles into a very smooth idle. Unlike the smaller 3 Series Convertible, BMW opted for a cloth top instead of a hard unit in an effort to reduce weight creep since the 6 now weighs over 4000 lbs. However, the cloth top is fully lined and does a thorough job of insulating occupants from the outside relative to a hard top. Thanks to a switch on the center console, the fully electric top can be raised or lowered. The entire process takes just over 30 seconds (holding the switch automatically lowers or raises all the windows depending on which direction the top is going).

I’ve panned BMW for the needlessly complicated transmission lever in a previous post and things are no different here. To simply put the car in reverse involves holding an unlock button and pushing the lever up once. If you miss the unlock lever you’ll find yourself still in Park….I mean, really? The same process takes place when engaging Drive and a push of the top button engages Park again. The driver will get used to it after awhile but I see it as needlessly complicated in a car that’s supposed to be sporting (or he can just skip the automatic and stick with the standard 6 speed manual). In any case, getting out on the road melted all minor complaints away. Simply pulling out of the lot gives the feel of a predator ready to pounce, the 6 feels lively and straining at the helm for a prod of the gas pedal. There are four driver controlled settings that change the 650i’s character: Comfort, Normal, Sport and Sport+. Top down, starting in Comfort mode, the 8 speed transmission simply melts through the gears and the suspension, while not going entirely soft, soaked up most of the bumps along the test route. Once on a straight and curvy section of the test route (and also keeping a watchful eye for the Fuzz), I went into full attack mode and engaged Sport +. Things got rather exciting very quickly. 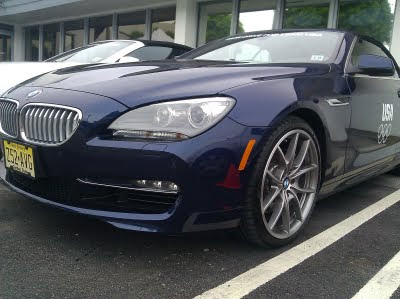 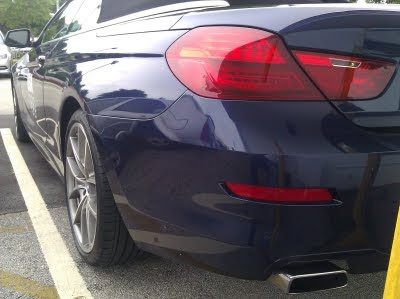 Sport+ enhances throttle response, quickens the transmission’s shift points, firms up the suspension and adds heft to the steering. Slotting the transmission into manual mode I downshifted to 2nd gear and floored the throttle. I expected a bit of lag, given that this is a boosted engine, but was surprised by the right-now surge of power I got. I have to say, the 400hp and 450 lb-ft of torque was enough to break the tires loose even under a rolling start. Upshifting through the gears, the transmission responded quickly and without hesitation and the steering was alive with communication, always telegraphing the amount of grip available at the front wheels. The 650i inspired so much confidence I was able to get into a controllable drift, tires smoking and opposite lock on the steering. It should be noted that stability control is not fully disabled, even in Sport+ mode thus enabling the driver to have some serious fun while always providing an electronic safety net so he doesn’t get into too much trouble. At any speed, the punchy V8 provided effortless forward thrust. Trust me, it is very easy to get into triple digit speeds in this car. Such is the stability and poise that the chassis offers. 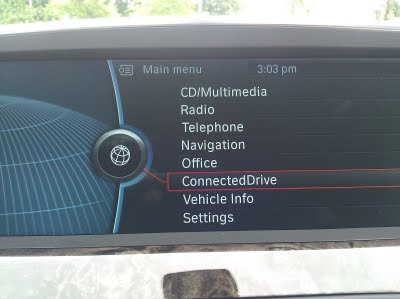 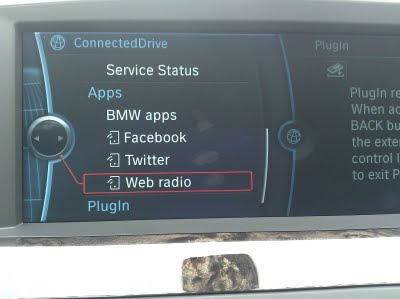 After the test drive, I had a chat with BMW specialists Ted Napolitano and Chris Hana about BMW’s new vehicles as well as advances in the car’s control systems. Ted was kind enough to give me a demonstration on BMW Apps, a new system that’s just now coming on stream in 2012 models. Basically, BMW apps is a software embedded into the iDrive system that allows a user to control apps already on his smart phone (iPhones are currently programmed, Android users will have to wait until later this year) such as Facebook and Twitter. The software is also better able to control media already on the phone such as videos and music. Using the phone’s data plan, the system can also allow the car to be its own mobile hotspot, thereby connecting other devices. 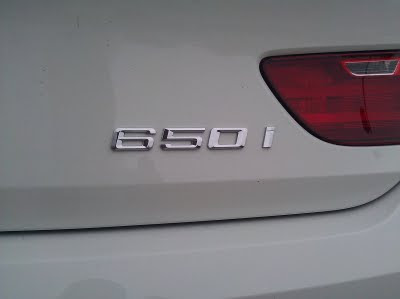 In conclusion, the 2012 650i Convertible provides the signature BMW sports car handling and amplifies it by taking the top off. BMW may be moving away from normally aspirated engines in an effort to increase fuel efficiency by using turbo technology, but the engines suffer only a hint of lag in exchange for a massive dose of power. Couple that with a stiff chassis that provides for great handling while sacrificing nothing in long distance cruise comfort and you’re pretty much left with one thing: the Ultimate Driving Machine (at least until the 560hp M6 arrives).

Footnote: I was pleased to meet 2008 Olympic Gold Medalist Lindsay Shoop who was present to promote BMW’s Drive For Team USA campaign. Anyone can test drive the 3, 5, 7 or the new 6 Series and for each test drive scheduled, BMW will donate $10 dollars to fund Team USA athletes in preparation for the upcoming Olympic and Paralympic Games.

I’d like to once again thank Chris Hana and Ted Napolitano for answering my questions and allowing me a second go in the Sport packaged equipped 6 Series. You guys rock! Can’t wait for the M5! (Anyway I can snag a 650i for a long term test guys?)