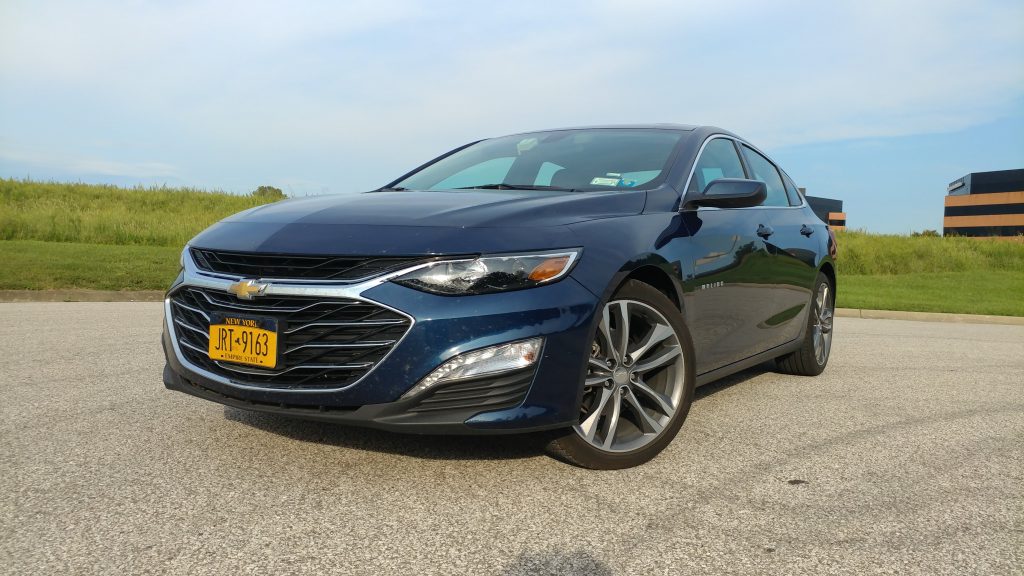 When was the last time you saw an advertisement about the Chevrolet Malibu? Hell, do you even remember the Malibu exists? With crossovers steadily overtaking the humble sedan as the go-to family vehicle, it’s no surprise. While Ford has walked away from the mid-sized sedan segment entirely, Chevy refuses to do so quite yet. Walk into a Chevy dealership, however, and possibly the only vehicle on the floor that isn’t a crossover/SUV, is the Camaro. Want a Malibu? Or Sonic? Or Impala? They’re probably at the back of the showroom. Or somewhere in the backlot. Which is a shame really because the 2020 Malibu is a pretty good car.

Last redesigned in 2016 and refreshed for 2019, the Chevy Malibu attempts to be not just a good value, but an eye-catching one. The 2019 tweaks to the front and rear ends attempt to polish what already was a handsome and athletic looking sedan. The 19″ wheels on my LT-trimmed tester also lend to the ready-to-rumble stance. Overall, I like Chevy’s attempt to freshen up the Malibu to enhance its relevance in the shrinking mid-sized sedan segment. The Malibu has an upscale and athletic look that, even in a rental lot, makes it stand out.

However, it takes more than good exterior looks to woo buyers away from that Accord down the street and here, the Malibu lets down slightly. Compared to the new interior of the Honda Accord (or even the refreshed upon refreshed Mazda6), the Malibu looks and feel rental grade. Spring for the pricier Premier trim and you’ll get some of that premium feel back. The infotainment screen is large and very intuitive, offering quick response and the added capability of Apple Carplay and Android Auto. Front seats are spacious and comfortable, though lumbar support was lacking a bit. The cabin feels airy and the giant, panoramic sunroof really helps here. Rear seat space was a bit tighter than the Nissan Altima I reviewed recently. Materials are decent with some cheap plastics sprinkled around the cabin but build quality is good.

Powering my LT tester is GM’s 1.5-liter turbocharged inline-four cylinder that spits out 163 horsepower and 184 lb-ft of torque through a (wait for it) continuously variable transmission (CVT). Now, despite my loathing of CVTS, I’ll consent that this is actually pretty good. The Malibu’s CVT does a decent job of simulating a traditional automatic with seven “virtual gears”. Mash the go-pedal and the CVT will simulate a kick-down through each ratio as speed builds. Use the switch on top of the gear lever for manual control and the CVT will hold each ‘gear’ until the driver says so, as the driving gods intended. The transmission is so well behaved I had to keep reminding myself this isn’t the six-speed auto the Malibu premiered with in 2017. When a CVT doesn’t call attention to itself in normal driving, you know the engineers did a great job. Nissan (and some traditional automatics) could learn a thing or two here.

The Malibu is no sports sedan, preferring the smooth and easy going route. It doesn’t have the “lets-have-some-fun” nature of the Mazda6 or Honda Accord, but it won’t put a tire wrong. Great highway manners and nimble handling are the Malibu’s high points behind the wheel. Which, when it boils down to it, is what most buyers want anyway. The CVT also provides decent fuel economy. While I never ventured much on the highway, I averaged a respectable 26-mpg with my always-heavy right foot. All in all, the Malibu offers a nice balance of ride and handling.

While others in the segment have been either thoroughly redesigned or refreshed, the Malibu still has a rental-car feel to it. Again, step up to the Premier trim if you want more niceties but it still stands that the Malibu can’t really compete with the best. With the hot new Hyundai Sonata and Kia K5 fresh and ready to rumble, the Malibu is feeling its age. To sum it up, the 2020 Chevy Malibu is a car that, while it struggles to compete with the best, offers enough of a decent value to be a safe and competent family sedan. Now, if only you could see it behind that new Suburban on the showroom floor.