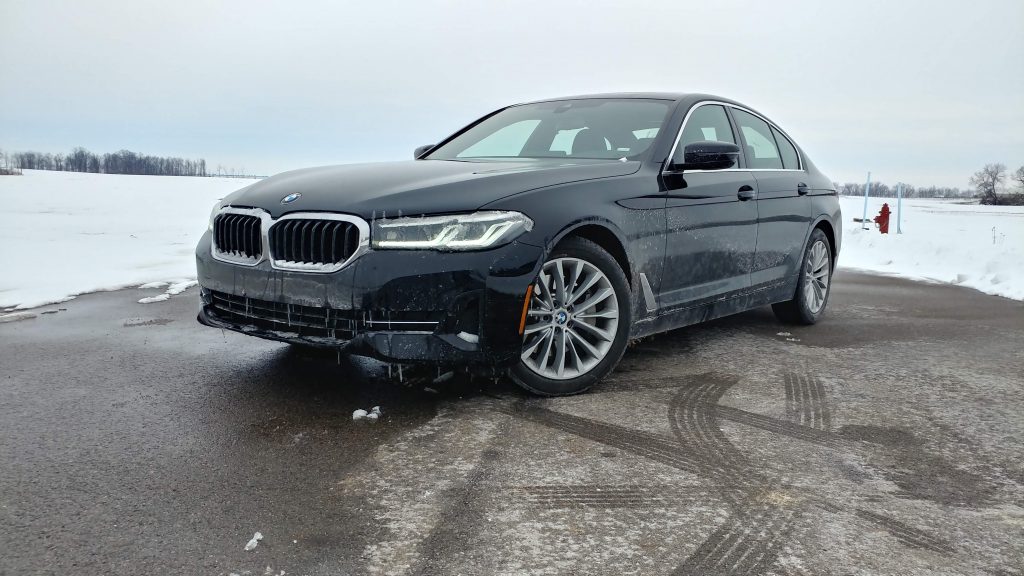 As a Jamaican, I’m really not built for wintery climates (hats off to the Jamaicans thriving in the far north). I don’t have much experience in the white stuff and even less so driving in it. So on a recent trip to the Midwest, ahead of a significant winter storm, I had to choose my rental steed carefully. An 80-mile trek through Ohio loomed with snow already starting to coat the roads.

Me: “Whatcha got that has all wheel drive?”
Rental clerk: “Umm, I think the Infiniti Q50 and the Volvo S60.”

Rental Clerk: *calls out the back* “Hey Jim, is that Bimmer still there?”

Rental Clerk: *magically pulls out BMW keys* “Found it! Here you go sir, should be right outside.”

Somehow, this pristine 2021 BMW 530i xDrive went unnoticed by the many drivers running out to claim their plebeian crossovers. And it was sitting right outside the front door. It’s if God smiled and said, “I got you.” With only 600 miles under its belt, there was no telling if those were abused miles but overall, the 530i looked flawless. With the snow coming down and the temperature dropping rapidly, I hastily popped the automatic trunk to stash my bags and hopped inside.

After about 30 minutes of figuring out the climate control and infotainment, I was on my way. Still haven’t fully configured the climate control I’m glad I the heated steering wheel and seats were easy to use. Steering the 530i on the highway, the diesel-like torque is surprising. Talk about get-up-and-go. This 2.0-liter turbocharged 4-cylinder feels a lot more powerful than its 248-hp suggests. Squeeze the throttle and the Bimmer simply squats and lunges forward, all wheel drive feeding the engine’s grunt to the ground. No, it doesn’t sound anything like BMW’s silky smooth straight sixes, but it’s not off-putting either. Underway, the 530i is quiet and refined. Interior fit and finish is typical BMW: dark and Germanic but high quality. A 12.3-inch digital gauge display sits front and center of the driver with a good amount of adjustability. It’s not Audi-levels of configurable which kinda sucks, but it works very well. To the right, an equally large 12.3-inch infotainment screen houses BMW’s iDrive system which now incorporates Apple Carplay and Android Auto. Yes, just as in the 740i I reviewed recently, Gesture Control is a thing and just as before, it’s more gimmicky than useful.

Maybe I was a dufus but it took a good while to connect my phone (it’s been acting up so maybe it’s the phone). Once connected however, it’s easy to cycle through the entertainment options. The iDrive system now has the option of a touchscreen along with the rotary controller on the center console. Voice control is very intuitive, the feature not missing a beat in understanding my Jamaican accent. The infotainment system itself is fast, responsive and above all else, NOT infuriating to use. Check out my review on the BMW 740i for more on the iDrive system.

After about an hour on the highway, I was blessed with some twisty, two lane roads for the final stretch to the hotel. With this part of Ohio yet to feel the brunt of the oncoming storm and the roads mercifully clear of snow, it was time to put the 530i through its paces. Selecting Sport+ and tapping the paddle shifters, the BMW felt poised through the corners. Good throttle response and a ZF 8-speed automatic keeping the engine in the meaty part of the powerband, the 530i zinged its way through the twisties. Steering feel is numb, although a hint of the tires’ grip limits wormed its way through the tiller. The parts of the road that were moderately dusted in snow, the xDrive system never slips and cleverly reapportions the power to whichever tire has good grip. Make no mistake, this is a big car, but it handles the mass very well. Feeling bold, I nosed onto a snow covered road to see just how well the all-wheel drive system handled the white stuff. I figured I’d go down some way and then make a U-turn back the way I came. The snow was probably around 3 inches deep by my winter-rookie estimation. With some relief, the 530i handled the road decently. Every time I feel I’m getting embarrassingly stuck, the Bimmer simply pauses for a split second, then powers its way through. I thought about doing some drifting, then thought better of it and left the scene.

No need to tempt fate.

Finishing my business the next day, I had time to really take in the 530i’s exterior. The new LED running lights are a big styling departure, no longer the semi-circular units but now L-shaped. If the kidney grille were absent, this could be any other car. The grille itself is slightly taller and wider, more in line with the larger 7 Series, just not as garish. I’m not a huge fan of the lower front end treatment but I could live with it. The BMW models are looking so similar now that I almost mistook this for a 3 Series. It’s not a huge car at first glance but as you get closer, the size starts to become apparent. The rear end is tasteful with nicely integrated dual exhaust tips (which are actual tips and not just bumper cutouts, good on you BMW). This 530i didn’t have the M-Sport package, which consists of more aggressive styling and larger wheels but that’s fine. I’m starting to find the looks of that package a bit garish anyway. The 530i as is, presents a conservative yet confident and assertive stance that is attractive. Maybe I’m getting older, but the more I spent time with the 530i, the more it grew on me.

Heading back to the airport the next day, was another great drive. Deciding to have one last fling before refueling, I steered the 530i’s nose towards some back roads near the airport. Again, the BMW eagerly showed its stuff, this time on roads much drier. To say I didn’t want to give it back is an understatement. The 530i does it all, equal parts long distance cruiser and a decent partner when you want to have some fun. Sure, it’s not Z4 sports car fast and it may not be the fire-breathing M5 (or even the next-up six-cylinder 540i), but it has enough power and old-school BMW goodness to get the job done without threatening the sanctity of your license. Throw in the xDrive all-wheel drive system for you northerners and you have a compelling luxury car package that, in my eyes, beats any crossover. So if you ever find yourself in a BMW showroom and the salesman keeps pointing you towards the X-whatever thats front-and-center, maybe give that 5-Series in the corner a once-over. Especially if you’re an enthusiast.