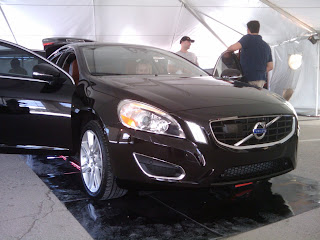 Quick, what’s the first thing that comes to mind when you think of Volvo? A box? A box that the box came in? Safety? Sweden? Another box?

How about naughty? No?

Well, that last term is what Volvo is using to describe the latest incarnation of the S60 sedan. Yes, they’re actually describing it as “the naughty Volvo”. I know, weird. But let’s give Volvo the benefit of the doubt here. After all, this latest S60 isn’t necessarily the first Volvo to place an emphasis on sportiness. The ‘R’ version of the last generation S60 was arguably the sportiest Volvo to come out of Sweden, boasting a 300hp turbocharged five cylinder plus aggressive suspension and styling tweaks. Having driven a 2006 model with a 6 speed manual transmission, I deemed this as truly a break in tradition from the normally safe and somewhat stodgy nature of a traditional Volvo car. However the Swedish automaker, in the hopes of attracting a younger audience, has reinvented its vehicles into stylish and attractive statements that, again, goes against what the regular person would normally think of a Volvo. Dare I say, Volvo may even alienate some of its loyalists with this new direction in styling. 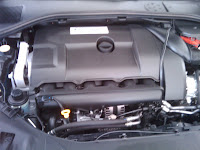 At a driving event held at the Gulfstream Park in Hallandale Beach, Miami, Volvo invited the public to compare its new sedan against its competition, namely a BMW 328i sedan and an Audi A4 2.0T. How Volvo sees these cars as competition, I cannot fathom why (I’d think the smaller S40 would be more of a match for these Germans) but remember that the larger S80 is more or less targeted at the midsize segment (5 Series, A6, E-Class) so the S60 is something of a misnomer. Here’s a small breakdown of each sedan I would be driving:

Immediately you can see things are stacked in the Volvo’s favor. In any case, with the S60 being a somewhat larger car (riding on a version of the larger S80’s platform) I imagine the smaller Germans would be better drivers when it came down to handling and at-the-limit driving. So, in wanting a baseline to gauge the S60’s behavior, I drove the A4, then the 328i and the S60. Here’s how things went.

This newer A4 is a much larger car than the previous model before it and it shows in the handling. Very stable and solid in the corners, however the steering is quite sloppy. It stifles any communication to the driver as to what the front wheels are doing and how close he is to the limits of adhesion. The 2.0 turbo is peaky with a lot of turbo lag and the transmission compounds this by refusing to hold a selected gear, upshifting at the wrong moment such as midway through a corner. I found myself having to consciously be mindful of what gear I’m in so I didn’t find myself in too high a ratio. Lots of understeer but then that’s to be expected in a FWD car. Brakes were marginal at best. Overall, the A4 is stable but the limits are low. If you’re buying this car, get the Sport Package. As a matter of fact, splurge and get the S4 with the supercharged 3.0 V6. You’ll thank me later.

I had high hopes for the Bimmer going in to the first corner. RWD? 50/50 weight distribution? So what if it didn’t have a Sport package? This is the Ultimate Driving Machine! Man oh man, how wrong I was. First corner? Understeer. Transmission is the same as the Audi, refusing to stay in a selected gear and upshifting itself at the wrong moment. The steering offered decent communication but I found myself flailing with the wheel around the corners. Isn’t the BMW supposed to be fun? No, this was more WORK than fun. And where’s the power? At least the Audi offered a lot of torque to surf on when it was in the right gear. The BMW on the other hand, with a paltry 200lb-ft, made you rev like mad to get any decent speed. The engine was a joy to listen to however: nothing sounds quite like an inline 6 revving its heart out. Braking was quite good, better than the Audi but surprisingly didn’t hold a candle to the superior S60. Overall, the 328i is the model you buy for your wife or daughter. If you’re really interested in sport, go for the 335i with its 300hp turbocharged inline six. Yeah, and tick the box that reads “Sport Package” while you’re at it.

Believe me, I’m just as surprised as you are. After wringing out the Germans, I found myself not wanting to believe the S60 could possibly be any better. Sure it has 300hp, but it’s larger and heavier than the other two. Plus, it’s a fricking VOLVO. I was about to have those words shoved right down my throat. Just before the floodgates were opened to drive the test vehicles, the driving staff on hand performed a 0-40-0 test between the test vehicles. First they’d accelerate to 40mph then brake hard to a stop. The car that did each of these things first would be the winner. No surprised the S60 out-accelerated the competition, but the fact that it also outbraked them (the BMW surprisingly) was nothing short of spectacular. So here I was behind the wheel of the Volvo.

Acceleration was breathtaking. At the limit cornering was admirable (thanks to AWD, more on this later) and braking was very impressive. The S60 suffered from the same transmission gremlin that refuses to hold the gear you want for cornering, but with 325lb-ft of torque to surf with 90% available from 2000rpm, the acceleration was still commendable. The 3.0 engine employs a twin-scroll turbocharger to decrease turbo lag, but that was still a problem. Steering was a bit sloppy but tidier and more communicative than the Audi, about on par with the BMW. Whereas the 328i makes you actually WORK to get the most out of it, the S60’s limits are high but easy to approach. The computerized AWD system with limited slip differential allows torque to be split not only front-rear but side to side at the rear, virtually eliminating understeer and pushes the tail of the S60 around corners. In the really tight stuff, I could actually feel the system working to eliminate as much understeer as possible. You can steel feel the weight of the car being thrown around, but it was manageable and stable throughout the track run. 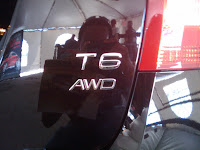 Color me impressed because that’s exactly what I was. I found myself choosing the S60 over the Germans present because I actually had more fun driving the S60. But there’s a rub here. As I stated earlier, these were base models of competing cars that Volvo chose for comparison with its S60. Had they been topline models; like the S4 or 335i, the results would be quite different. However, not to take anything away from Volvo, the S60 is indeed sportier than anything it has produced thus far (except for the last S60R, I’m quite adamant about that). Looking at Volvo’s current lineup, the S60 does have the hardware and guts to back up Volvo’s claim of being “A Naughty Volvo” if not “The Naughtiest Volvo”.

Don’t forget though that this is still a Volvo and safety is the primary drive for the Swedish automaker. In this area, the S60 doesn’t disappoint and is equipped with what Volvo calls City Safety Technology. This active safety hardware uses an optical radar sensor in the front of the grill and measures the speed and distance of any objects in front of the car. These calculations are done 50 times per second and in the event of an imminent collision, the system will apply full braking. First introduced on the XC60 crossover, Volvo has augmented the system on the S60 sedan with a new technology called Pedestrian Detection. Using the same radar sensor in the grill, plus a camera module mounted at the base of the overhead rearview mirror, the system is able to “see” and “read” the outline and behavior of persons around the front of the S60. If the system detects an imminent collision with a pedestrian (hence the name) it alerts the driver with a warning tone and flashing red LEDs atop the dashboard. If the warnings go unheeded, the S60 will apply full brake power to bring itself to a complete stop short of the lucky pedestrian. As the name suggests, this works only at city speeds, between 2-18 mph. I tried this system and it works as advertised. The trick is to trust the vehicle completely (hard to do if you know you’re about to hit something…or someone).