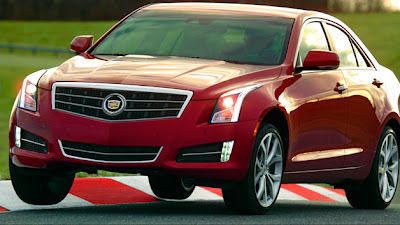 In the world of compact luxury sedans, the BMW 3 Series has reigned supreme for a number of years. It has successfully fended off competitors like the Infiniti G sedan and Lexus IS that repeatedly attempted to knock the 3 off its pedestal. The trouble with being King of the segment is that you’re effectively a bulls-eye for would-be rivals. Nothing has come close to the Bavarian’s apparently perfect mix of ride and handling (even though said competitors would have you think otherwise). Some rivals have tried to meet the 3 Series head on like the Lexus IS, even spawning the IS-F to take on the M3. Others, like Infiniti and Cadillac have gone the “tweener” route: cars that are larger than the 3 but smaller than the next level, the mid-size segment. Cadillac tried this option with its original CTS and met with success but over the years, even it realized that a more targeted response to the 3 Series was needed.

Designed from the ground up to be a direct competitor to the Bavarian, the ATS is built on an all new RWD platform codenamed Alpha, that is said to be both lighter and stronger than the 3 Series, yet offer the same subtle ride/handling balance that has come to characterize BMW. The exterior styling, like other Cadillacs, can not be mistaken for anything else, except a slightly smaller CTS. Employing the brand’s “Art & Science” theme of its big brother, the ATS rounds off some of the sharper edges, giving the sedan a slightly curvier look than the razor-edged CTS. The overall look is elegant, yet engaging and sporty.

However, one of Cadillac’s main design briefs with the ATS was its performance; more to the point, that it be equal or better than the competition and the ATS more of less achieves this goal on paper. Spending considerable development time on Germany’s Nurburgring race track, Cadillac engineers honed the ATS’ platform and engines to better that of BMW’s offerings (using the previous E46 version as inspiration). Equipped with GM’s Magnetic Ride Control (dampers filled with magnetorheological fluid that change in viscosity when passed through a magnetic field) and 50/50 weight distribution, Cadillac promises the ATS will be light, nimble and seriously fun to drive. 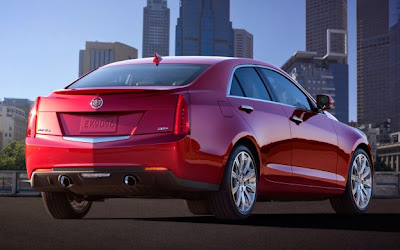 The 2013 Cadillac ATS will be equipped with three different engines at launch. The base ATS will have a 2.5 liter, naturally aspirated inline 4 cylinder good for 200hp and 188lb-ft of torque and 30mpg on the highway. The serious enthusiast though will look to the upper level engines for serious fun. Slotted above the 2.5 liter is a 2.0 liter turbocharged and direct injected 4 cylinder putting out 270hp and 260lb-ft of torque, an effective challenge for the new BMW 328i’s turbocharged, 2.0 liter 4 cylinder. Topping off the range (at least until the inevitable monster ATS-V) is the ubiquitous 3.6 liter direct injected 318hp V6. Cadillac has recently announced a diesel engine for the ATS at some point in its first life cycle, although it isn’t confirmed if it will be offered for the American market. Transmissions will be a choice of either 6 speed manual or automatics.

On paper, the ATS looks to be a credible competitor in the compact luxury sedan segment. With claims of lightness, sportiness and efficiency, Cadillac’s newest offering has the potential to accomplish what the tweener CTS hasn’t quite been able to do.
Can’t wait to see what the ATS-V will be packing. Stay tuned for a first drive!

[UPDATE] Cadillac has launched a new configurator for the ATS that allows you to mix and match options, just in case you were wondering about that manual transmission options availability on the 3.6 V6 (it’s not…sorry). Pricing hasn’t been included (coming later).