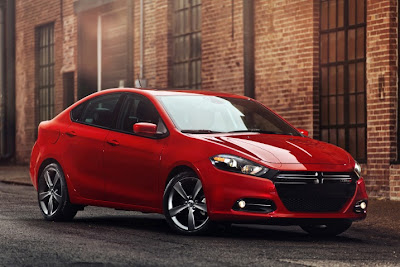 I never really was a fan of the Dodge Caliber (the raucous Caliber SRT4 being somewhat of an exception). Meant to compete with Civics and Corollas, the Caliber never made much of a dent in the segment due to its uninspiring driving dynamics, cheap interior and overall oddness. The introduction of the new 2013 Dodge Dart aims to right the Caliber’s flaws. 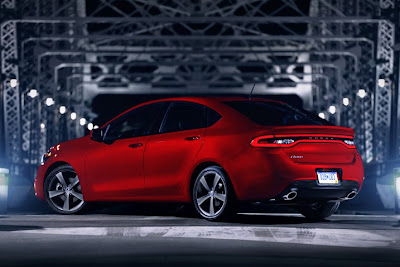 Look closely at the Dart’s profile and hints of its Neon predecessor can be seen. The car’s greenhouse, low nose and upwardly angled belt line are clear indications that Dodge took a page out of the Neon’s book as far as aggressiveness is concerned. The Dart appears to be what the Neon would look like had Dodge not stopped the car’s development. The exterior design is overall handsome, especially in R/T guise with the blackened signature Dodge crosshair grille front and center framed by a gaping lower opening and flared headlight clusters. Want to know how you can tell you’re approaching a Dart at night? the racetrack-designed rear lighting system is a dead giveaway (though it could be mistaken for a Charger at a distance). 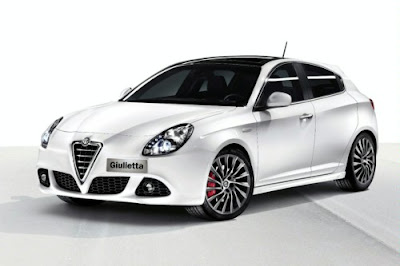 The Dart chucks the Caliber’s flaccid platform in favor of the Fiat-designed underpinnings used by the Alfa Romeo Giulietta’s, although stretched in all directions and strengthened for American standards. The Guiletta is a great starting point as it offer’s Italian levels of strength, stiffness and rigidity. Thus the Dart should compete very well in the compact segment, equaling or besting interior dimensions of competitors like the Hyundai Elantra and Ford Focus.

Inside, the Dart reflects Chrysler’s new level of interior quality. The instrument cluster presents a seven inch TFT (thin film transistor) screen that is customizable by the driver and in the center is a huge 8.4 inch screen that serves as the interface for Chrysler’s UConnect infotainment system. Material quality should match those offered by the peers of the segment. 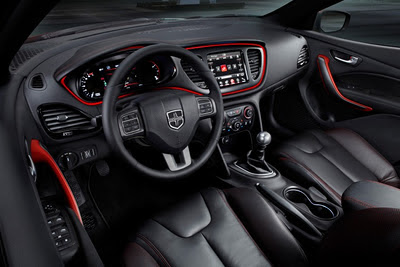 Power for the 2013 Dodge Dart comes from a new range of 4 cylinder engines dubbed ‘Tigershark’ (!!??) by Chrysler. Anchoring base models is a 2.0 rated at 160hp and 148 lb-ft of torque while mid-levels carry an optional 2.4 Tigershark equipped with Fiat’s Multiair variable intake valve system rated at 184hp and 171lb-ft of torque. The headline engine however is Fiat’s turbocharged Multiair 1.4 producing 160hp and 184lb-ft of torque, aiding the Dart to achieve its 40mpg combined rating. Manual and automatic six speed transmissions will be available with a six speed dual clutch automatic expected to be paired exclusively with the 1.6. A nine speed (!) automatic will be introduced for calendar year 2013.

From an initial standpoint, the 2013 Dodge Dart looks to make a serious presence in the compact segment and finally offers Chrysler a substantial product miles ahead of the dowdy Caliber.

Stay tuned for my test drive later in the spring.