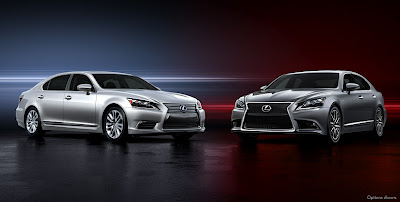 Lexus has grown quite a pair as of recent.

Yes, yes, I know they’ve produced the LFA super car as well as the BMW M3 fighting IS-F but those, as far as I’m concerned were oddities in a lineup that has, since its inception, stressed isolation, quality and refinement over excitement. The first LS400, for example, was a car that was so much better built and offered the same amount of luxury amenities. refinement and arguably better quality as the benchmark Mercedes S-Class, that it caused quite a stir in the luxury segment. Other Lexus products that followed adhered to this formula for quiet, unobtrusive motoring with the ES sedan and RX crossover becoming bestsellers in their individual markets. Lexus did try to inject some excitement with the second generation GS line in the 1990s and the first generation IS line in the early part of the last decade but they couldn’t shake the subdued and milquetoast nature that they had built up over the years.

Then came the 4th generation 2013 GS previewed by the LF-Gh concept…and with it, the new corporate (and angrier) face of Lexus.

BMW has its signature twin-kidney grille, Audi has the one piece mug that dates back to its Auto Union days, Acura has…that beak and Mercedes gets by simply by having that three-pointed badge. Lexus hasn’t had anything to distinguish its products until now. Starting with the new GS line, Lexus has now incorporated a new ‘spindle’ grill design to work with a refinement of its L-Finesse design that apparently harks back to Toyota’s early days as a spindle company. Think of an Audi grill with the top third pinched towards the center and you get the idea. The GS concept that debuted this new design was striking and, in my eye anyway, a tad overwrought but it was definitely distinctive and won’t be easily confused with anything else. So far the grill has proliferated throughout the Lexus line, exhibiting the automaker’s (and Toyota CEO Akio Toyoda’s) new emphasis on making its products visually and dynamically exciting. I wondered how Lexus would imbue its flagship LS sedan, arguably the pinnacle of smoothness, isolation and quality in its segment, with this new direction.

On first glance, quite well it seems. The 2012 LS struck a quite handsome stance and was a good recipient of the brand’s L-Finesse design that debuted early in the last decade, though it was not that exciting to look at. The new design finally gives a bit of menace and character to the dowdy LS, the centerpiece being that angry looking face. The headlights have been redesigned with arrow-shaped LED accents on the lower-end while the headlamp apertures themselves angle downwards to meet the grill, giving the LS a more creased-brow look. The awkward looking fog light fixtures on the 2012 model have been replaced by boomerang LED lights that frame the lower air visages while the hood now incorporates some surface creasing to enhance the more aggressive look. Looking head-on, the new LS looks positively mean compared to its predecessor. The creased upper surfacing follows a character line all the way back to the rear end which also gets some nip/tuck treatment. The tail lights are now a series of L-shaped LEDs and the fancy chrome exhaust finishers remain (I always liked the look of these). All in all the exterior is more muscular looking than the smooth but bland 2012 model.

Perhaps most surprising is the introduction of a new F Sport model which seeks to inject a bit of driving character into what has been ritually known as a smooth operator. The LS has never been particularly exciting to drive, rather excelling at providing a magic carpet ride that allows the big sedan to eat up highway miles at a relaxing rate. Give it a series of switchbacks and it all falls apart but no more. Along with the redesigned exterior comes an enhanced structure which is shared with all new LS variants. The F Sport adds to this with a lowered right height, retuned air suspension, new dampers and a Torsen limited slip differential to help improve putting down the power of the warmed-over 4.6 liter V8 which sees its output increased slightly by 6hp to 386. The eight speed automatic remains but also sees revising for quicker shifts, steering has been improved for more feel and response and 19 inch wheels fill out the wells nicely. The F Sport also gets an even more aggressive exterior with flared fenders, round LED fog lights, tapered and finned extensions for the front, side and rear valance and the dark, chrome edged grill protrudes ever so slightly, giving the F Sport a wide and planted stance.

Inside, the LS gets a total makeover. A new 12,3 inch screen (which debuted on the 2013 GS) dominates the dash and finally marks the debut of the Lexus Enform Apps multimedia system in the LS. This system can be controlled by either voice command or the new Remote Touch controller (I found this to be not as easy to use as the ones available from BMW or Audi) and allows access to such apps as iHeart Radio and Pandora. An excellent sound system as well as navigation with NavTraffic and NavWeather are also standard features while every surface that hands may come into contact with has been improved.

Along with the new LS 460 F Sport variant, the three other models carry over which include the standard LS 460, the long wheelbase LS 460 L and the top of the line all-wheel-drive LS 600h L hybrid with its V8/electric motor system putting out 438hp. On sale date is targeted for the first half of 2013 with a base price in the mid $60,000 range.

While the 2012 LS was a quite handsome car to look at, Lexus has definitely kicked up the styling of the new 2013 model a few notches. It remains to be seen if the flagship can cash in on the new found sportiness that the exterior promises but if driving reviews of the new GS model are any indication then what started with the LFA and IS models could be a sign of good and exciting things to come for the 2013 Lexus LS.