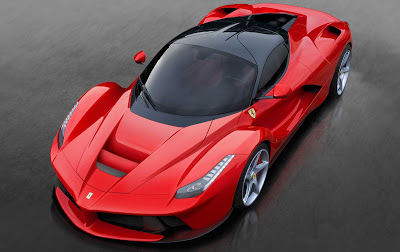 What’s in a name?

Rather than use a continuation of ‘F’ names like F70 or F150 (wait, scratch that last one) or even Enzo II, Ferrari’s successor to the vaunted Enzo supercar goes by the name LaFerrari. As quoted by Ferrari Chairman Luca di Montezemolo on the car’s unveiling at the Geneva Motor Show earlier this year, “[The LaFerrari] is the highest expression of excellence of our company: technological innovation, performance, futuristic style, driving pleasure. It is an extraordinary car, destined to our collectors. A car with technical solutions, which in the future will be integrated in our range and which are the benchmark for the entire sector. “LaFerrari” represents the best planning and building capacities in our Company, including those acquired in Formula One, knowledge, unique in the world.”

Instead of debating how Ferrari could produce a car with even higher performance than the founder’s namesake Enzo, let’s just be glad that they did. No doubt progress has been made since the Enzo turned the world upside down with its record breaking performance numbers at the beginning of the last decade. That car served a direct link to Ferrari’s longstanding Formula 1 effort and the styling echoed this. It wasn’t pretty in the way the earlier F50 (or even the 360 Modena) was curvy but it’s styling was purposeful and followed the “function over form” technique that Ferrari is a master of. LaFerrari builds on this but adds a hint of purposeful beauty in its lines. Where the Formula 1 link was obvious looking at the Enzo head-on, LaFerrari isn’t so obvious, yet every curve and kink in its skin was designed and styled to move air in a very efficient way. The pointy front gives way to a series of active-aero elements sprinkled around the car that are computer actuated to respond to aerodynamic needs on the fly.  The whole looks-like-a-fighter-jet thing may be a bit overdone, but it is entirely appropriate here. Every vent, slat, wing and inlet does something to the airflow to either create downforce, direct it for cooling or make it retreat hastily from the body work. In fact, LaFerrari (which means “the Ferrari”, go figure) runs in two modes: High Downforce or Low Downforce according to the driver’s wishes.  Despite being the first product designed entirely in house (Pininfarina had nothing to do with its design), Ferrari can be proud of the fact that LaFerrari looks like a proper Prancing Horse. I think this will age as well as others that have come before it. 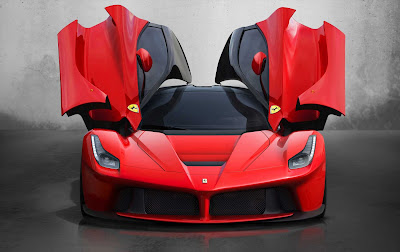 Enough with the exterior lines of the car, you may be saying, what powers this thing? Despite the ongoing transition to smaller powerplants in the name of increasing efficiency and lessening the amount of carbons in the atmosphere, Ferrari, like Lamborghini with its Aventador, has bucked the trend and stuck with an enhanced version of the V12 powering the F12 Berlinetta. Displacing the same 6.3 liters, LaFerrari’s version is strengthened to the tune of 789hp at 9250 (!) rpm and 516lb-ft of torque at 6750 rpm. That’s a good 59hp more than the F12 generates and this is due to a lighter crankshaft and variable length intake runners. Here’s where the whole ‘green’ thing comes in. Ferrari is keen to acknowledge the need to be more environmentally conscious with its lineup and though they could’ve left the V12 alone and called it a day, they decided to blend its F1 racing technology with the V12 to create a ‘mild’ hybrid. But trust me, a Prius this ain’t. 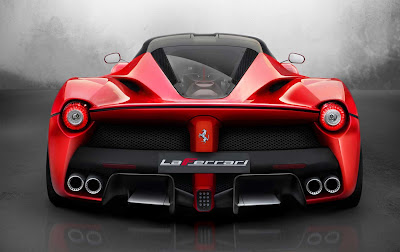 If you’ve ever watched F1 racing you may have heard the term ‘KERS’ being thrown around. KERS stands for Kinetic Energy Recovery System and consists of an onboard battery that captures kinetic energy from the intense braking heat generated by F1 race cars. This energy is then channeled back to the drivetrain  for an extra boost of power for a limited time. In LaFerrari, the system is called HY-KERS (the HY standing for HYbrid which LaFerrari is in essence) and operates in essentially the same way, except power is channeled through two electric motors (one to run the car’s ancillary equipment, the other specifically for drive power) attached to a seven speed dual clutch transmission to the tune of 161hp. So the combined power rating for the drivetrain is an exceptionally heady 950hp and 660lb-ft of torque. This enough to power LaFerrari to a top speed of 217mph and a 0-60mph time of under 3 seconds (take that Bugatti).

When the time comes to haul down all that speed, massive carbon ceramic brakes measuring 15.7 inches in front and 15.0 inches at the rear can bring LaFerrari down from speed in a time that rivals the Bugatti Veyron (60mph-0 times under 100ft can be expected). Magnetic dampers are fitted at the four corners as are Pirelli P Zero tires and an E-diff to put the massive power to the pavement through the rear wheels. 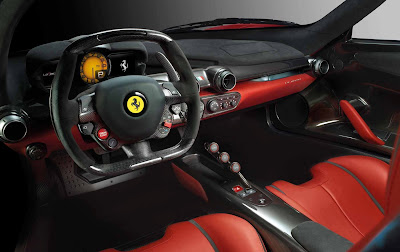 Unlike more greener machines though (including McLaren’s new P1), LaFerrari can’t travel on electric power alone. The HY-KERS system acts like a turbocharger to enhance the V12’s power at any given time and also helps it to run cleaner and more efficiently. Remember, this is still a hypercar so neutering it in the name of efficiency was not an option for Ferrari. Like a hypercar however, LaFerrari is extremely lightweight, construction consisting ot several types of carbon fiber sewn to make the tub and aluminum for the chassis and suspension. As a result, LaFerrari is expected to weigh in at less than 3000lbs with structural rigidity that bests the Enzo’s by almost 30%. The cockpit is handsome in that same function over form way, the driver sitting behind a 12.3 inch multi-function screen and seats that, well, aren’t really seats. They’re more like padded forms molded out of the carbon fiber rear bulkhead and yes, they’re molded to specification on order.

Not that you may ever get your chance. Production is limited to just 499 at an expected price of around USD1.2 million. So if you have the means, best phone up Maranello. Right. Now. 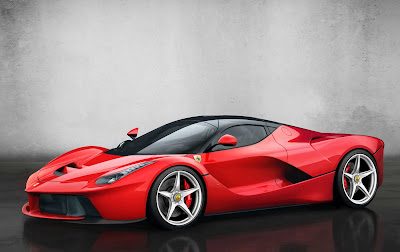 While the name may take some getting used to (Enzo certainly was when it debuted), LaFerrari is again expected to turn the world upside down, except it has competition from newcomer McLaren with its equally-hybrid P1, the new Lamborghini Veneno and the already-established Bugatti Veyron. Who ever said that cars of the future will only get lamer needs a check to the family jewels.

The future is now people.