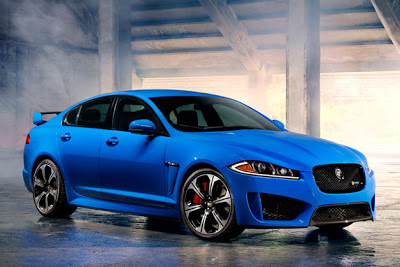 Perhaps that 510hp XFR in your four or five car garage is looking a little…tame. Jaguar has a solution in case you need more interior room than the 2-door XKR-S will allow (and you find the notion of a 510hp Range Rover Sport ridiculous). What you see here is the newest addition to the league of competitors chomping at the bit to take on the vaunted BMW M5, Jaguar’s recently unveiled XFR-S. As the name suggests, the new uber-sedan gets its mojo from a hotter version of Jaguar/Land Rover’s corporate supercharged 5.0L V8 that stomps out 550hp and 502lb-ft of torque channeled through a beefed up 8 speed automatic transmission with manual shifting capability. Other R-S spec hardware includes beefed up half-shafts at the rear, a sturdier crankshaft and re-calibrated suspension front and rear that was tuned (like everything else nowadays) at Germany’s famed Nurburgring circuit. Lightweight 20″ wheels are equipped on all four corners and are wrapped with sticky Pirelli tires. The electronic nanny systems like stability and traction control have also had some software updates to have them back off more, giving the driver increased authority over the XFR-S’ newfound power. And you’ll certainly hear that power through the new straighter exhaust that crackles and pops on throttle overrun. To make things even more interesting inside the cabin, Jaguar has fitted a sound symposer that pipes more engine noise directly inside. You’re forgiven if you’d rather not listen to the 825 watt 18 speaker Meridian sound system.Chances are you’ve never seen a Jaguar sedan that looks quite like this.

Visual changes to the XFR-S make the standard XFR look pedestrian by comparison. Starting off with the French Racing Blue paint job, the body features a deep, carbon fiber splitter that juts out front and is flanked by larger intakes. The grille surround is painted black while the mesh inset is also black. Deeper side sills are fitted and perform aero work that routes air to a huge carbon fiber rear diffuser beneath the rear bumper. A choice of two rear wings is available though, personally speaking, the larger one looks a tad boy-racerish on such a sleek body (on the contrary, it does provide greater downforce if you’re into that sort of thing). Inside, the upgrades are rather minimal, limited to carbon printed leather, some contrast stitching and the aforementioned Meridian sound system. While the exterior upgrades are sort of tastefully done, forget about slipping under the radar as you would in a normal XF. If the more aggressive exhaust doesn’t give you away, the paint job will.

Jaguar estimates a 0-60mph time of 4.4 seconds for the XFR-S while achieving the same fuel economy as the XFR at 15 city/23 highway (buh-bye gas guzzler tax). Unfortunately, don’t expect a dearth of XFR-S cars to proliferate your local Jaguar dealership as just 200 are expected to be produced, 100 of which are bound for the red, white and blue. Pricing starts at $99,000 excluding tax and destination and sales are slated to begin during summer of 2014. Make sure you’re at the head of the line.

It’s good to see Jaguar taking these necessary steps to be on a more or less equal footing with its German competitors. Despite the limited quantities that will be available, this hints at future R-S models becoming to Jaguar what M and AMG models are to BMW and Mercedes.Who says the good ol’ days are gone?

Images courtesy of Autoblog and Autoweek.