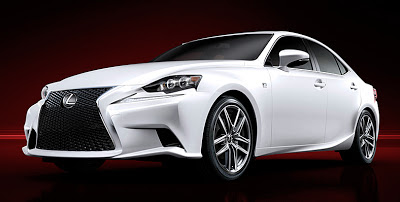 The current-generation Lexus IS has aged gracefully since its inception way back in 2006 and was among the first models to introduce the then new-L-Finesse design theme. With compact proportions, rear wheel drive and a duo of V6 engines ranging from 2.5L to 3.5L, the IS presented a more focused attack on the luxury sports compact segment reigned over by the BMW 3 Series. This generation IS also brought with it the introduction of the first in-house performance model branded as the IS F which brandished a hotter variant of the corporate 4.6L V8 found in the full sized LS sedan, stroked to 5.0L and producing 416hp, revised suspension and styling and a sportier nature to challenge the M, AMG and RS vehicles of the segment. However, with this design came a cramped cabin (someone famously told me that the IS is actually a 2 door with 2 extra kiddie-doors grafted on), a somewhat harsh ride and a cheapish interior that hasn’t followed the exterior in aging well.

Enter the 2014 Lexus IS which aims for a bigger slice of the luxury sports compact segment. Gone is the almost anonymous face and rounded styling in favor of sharper creases, edgier styling and the implementation of the corporate Lexus spindle-grille face that is proliferating throughout the lineup.Styling cues from the now out-of-production LFA super car are evident in the long, low hood and headlights. The spindle grille is perhaps the most dominant feature of the redesign which is proliferating through other Lexus models. In a word, the grille is HUGE, with the pinched section almost jutting forward like an angry mouth about to swallow prey. Flanked by twin flared air intakes on either side (and an extra pair on the F Sport), the grille is at once aggressive and polarizing. The brand’s signature arrowhead LED running lights that were integral with the headlights on other models now have their own housings just below the twin xenon jagged-shaped headlamps which, along with the low flat hood, are LFA-like in there appearance.The rest of the body appears ho-hum and slab sided until just before the rear door cut line where an up-kink in the rear quarter window adds a bit of drama. The side sills get a twist towards the rear and a character line trails from there to meet the stretched tail lights. Sitting on a longer wheelbase, the new IS projects a lower and wider stance than its predecessor. The rear view is also subtly redesigned where the tail lights slim towards the center and a diffuser sits below with twin exhaust pipes peeking underneath. As whole, the exterior is more dramatic and a styling gamble for the once-sedate Lexus.

Inside, more LFA touches abound in the center console and steering wheel. Thanks to the longer wheelbase (now about Audi A4-sized) and touch more width, indoor occupants should have more room to move with rear seat passengers benefiting the most with more legroom. The digital “driver meter” is an almost direct lift from the LFA, while electrostatic surfaces now control the climate system. The navigation has been substantially revised to allow 3D visuals and will now feature the Lexus Enform infotainment system. The dashboard is now more driver centric and is lined with higher quality, soft touch materials. The seats are thinner in design and are positioned a tad lower to improve comfort for the driver and front passenger.

On the engineering front, the 2.5L and 3.5L V6 powerplants return for the 2014 model with similar power figures of 204hp and 306hp respectively, although the manual transmission for the IS250 has been dropped. The IS350 however, gains the eight speed, paddle shift automatic, lifted from the IS-F which should provide for sprightlier performance in sporty driving conditions. A main focus for Lexus was for the IS to be the sportiest sedan in its class (a direct command from Toyota CEO Akio Toyoda) so to that end, every facet of the IS was looked at. In addition to the new gearbox, the electronically boosted steering was lifted from the larger GS sedan and enhanced for more steering feel. Also poached from the GS was its multilink, rear suspension, modified for IS duty and fitted with the Adaptive Variable Suspension that adjusts damping along five driver selected programs: Snow, Eco, Normal, Sport and Sport+. The body-in-white was also stiffened using additional spot welds along major junction points to improve rigidity. For the first time, all wheel drive will also be offered and made available regardless of engine choice.

Three models will be offered when the IS goes on sale later this year: IS250, IS350 and IS350 F Sport. Prices shouldn’t budge much from the outgoing IS and remain in the ballpark of other competitors.If the exterior is any indication, you can expect Lexus to be hotter under the collar as it seeks a new dynamic path. No longer is this the relentless/passionate pursuit of perfection. With the new IS and recently introduced GS and LS, Lexus is now in hot pursuit of sportiness.