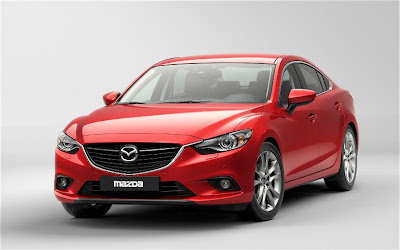 Being the proud owner of a first-generation Mazda 6, I was itching at the seam for whatever details I could dig up on the significantly redesigned third generation model. You can imagine my surprise (and thud from my jaw hitting the ground) when Mazda unveiled its gorgeous Takeri concept, a further refinement of the initial design study that introduced “KODO”, Mazda’s new styling theme that will define all its products going forward (replacing the stupid, gaudy smile that’s plastered all over Mazda’s current products…save the current 6). I mean (see below) just look at it.

Described by Mazda design chief Ikuo Maeda as “soul in motion”, the Takeri concept definitely strikes a dynamic pose and is better proportioned than Mazda’s outgoing design theme. Of course, the long front overhang cannot be ignored but the front end is distinctive and stylish, featuring a hexagonal grill with Mazda’s logo dead center. Toned down it may be from the Takeri concept, the 2014 Mazda has hit a stylish home run, giving other sedans like the Hyundai Sonata and upcoming Ford Fusion a run for their money.

Along with the new design language, Mazda is also introducing a slew of new technologies focused on increased efficiency dubbed ‘Skyactiv’. Instead of going to hybrid technology (that comes later), Mazda focused on refining the car and internals themselves by first, putting its models on a weight reduction program. The use of ultra high-strength steel in the chassis as well as aluminum for some components and reducing friction in its gas engines are some of the steps Mazda has taken. The results are a car that weighs significantly less than the outgoing model and engines that are near the top of their class for efficiency.

Speaking of engines, the new Mazda 6 will, apparently in a nod to that same increased efficiency, not offer an optional V6. No problem right? They’ll just do what Hyundai and Chevy have done and offer a turbocharged four cylinder to appease enthusiasts (like myself) who yearn for more power. Well yes…and no. The base engine will reportedly be a 2.0 four cylinder that in the CX-5 crossover punches out 155hp and 150lb-ft of torque, numbers that even in the relatively lightweight CX-5 are tame compared to that crossover’s competition set. In return for those appalling power ratings, the 2.0 allows the CX-5 to crest 33mpg on the highway with equally competitive numbers in city driving. To aid in urban driving, Mazda has fitted the 6 with i-stop, its in-house start-stop system that shuts down the engine during heavy traffic periods and restarts it in under 0.40 seconds. A technology that may (or may not) come to North America is Mazda’s i-ELOOP a system with a capacitor as its centerpiece. During deceleration, the kinetic energy from the brakes recharges the capacitor and enables it to power various systems like climate control while the car idles, taking some of the load off the engine. Since Mazda has vehemently denied offering a Skyactiv V6 (and no turbo four, not even the Mazdaspeed3’s) rumors abound about Mazda’s new Skyactiv turbodiesel may make its North American debut under the new 6’s bonnet. Chances are we’ll see a bored out version of the 2.0, stroked to 2.5 liters and making somewhere in the region of 190hp. We’ll see the official North American specs later this year so stay tuned to this space for updates.

Getting more into the Skyactiv philosophy, Mazda believes that weight is a simple but extremely vital area for going further on a gallon of gas. To this end, the 2014 Mazda 6 has shed some 300lbs from its chassis and should be one of the lightest cars in it segment, weighing just under 3000lbs. Aerodynamic enhancements to the body, such as underbody trays, a lip spoiler and that sleeker snout allow for an extremely low drag coefficient of just 0.26. That’s Prius territory people.

Mazda hasn’t skimped on the safety front either, equipping the new 6 with advanced features such as lane departure warning, blind spot monitoring, adaptive headlights with LEDs, an infrared-based emergency braking system that flashing the brake lights under heavy braking and an adaptive cruise control system that should make its appearance some time after the 6’s launch.

Inside the cabin will seem familiar if you’ve been inside a CX-5 recently. The materials are nicely textured with tight panel gaps and are reportedly of better quality than the outgoing car. Interior space was not a problem for the outgoing 6 either and shouldn’t be one now despite this 6’s slightly smaller footprint.

I really am excited to see the new 2014 Mazda 6 and I’m hoping that the car’s lighter weight and improved dynamic performance are enough to channel the spirit of my first generation car that the 2013 model lacked a bit of. I also hope that Mazda sees it fit to offer a higher powered version of the new 6 (Mazdaspeed6 anyone?) to appease us serious enthusiasts as well but in general, the 2014 Mazda 6 will pose a very serious threat to its rivals in the mid-sized segment.

Images courtesy of Car And Driver and AutoBlog.