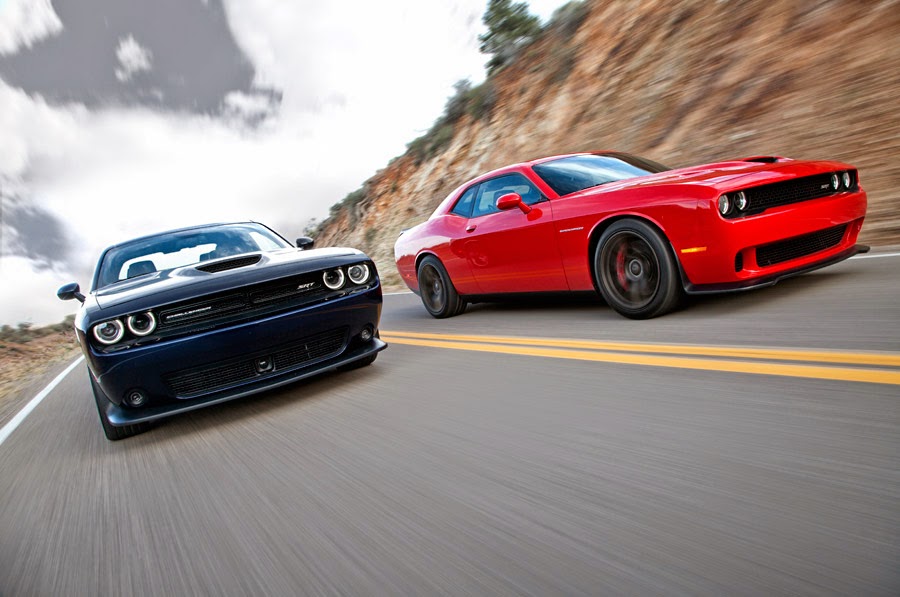 If the 2015 Dodge Challenger is a bullet shot across the respective hoods of the Chevy Camaro and Ford Mustang, then the new SRT Hellcat is a Tomahawk missile grazing the bonnets of the Camaro ZL1 and the Mustang Shelby GT.

In other words, this Challenger does indeed have a Hemi. And oh, what a nuke of a Hemi it is.

Let those numbers sink in. The most powerful V8 Chrysler has ever created, produces 707 stomping, rampaging horses and 650 lb-ft of torque. That, my friends, bests the paltry 580hp of the Camaro ZL1 and trounces the 662hp from Ford’s Mustang Shelby GT. Viper fans should look away right now, not even the 640 hp/600 lb-ft 8.0L V10 in SRT’s crown jewel can stand up to the supercharged fury of Chrysler’s 6.2L Hellcat V8. Shoehorned under the hood of what, to my eyes anyway, is the most direct reinterpretation of the classic muscle car from its heyday, the 2015 Dodge Challenger has officially taken the crown.

You can almost hear the collective jaws of Ford and Chevy engineers hitting the ground in Detroit.

Before we get too far ahead, let’s examine the rest of the refreshed Challenger lineup. Six years on the market have done nothing but cement the Challenger as one of the most faithful muscle car reproductions on the road today. Sure, the S95 Mustang had its day in the sun, now being replaced by a futuristic 2015 redesign and the Camaro is certainly aggressive but nothing has the absolute presence and charisma as a Challenger pulling in to the parking lot. As a result, marching orders for Dodge designers were simple: take nothing away from the car’s looks.

On the exterior, it seems they did indeed leave well enough alone, until you look at the finer details. The tail light is now split into two distinct elements with LED lighting instead of the original full width unit.  Wheelbase remains the same and up front, LED halo rings now surround the quad headlamps. The grille is a tad thinner and now split in two, mimicking the rear tail light, the hood sports a distinct power bulge while moving the functional hood vents forward a tad (a Shaker hood is optional on V8 models). A deeper air dam and an optional splitter on performance models rounds off the exterior changes. A variety of new heritage colors like Sublime, B5 Blue and Tor Red are also available to give your Challenger a more classic look.

Under the new body, Chrysler has reworked the greasy bits by using an aluminum differential and ditching the old car’s hydraulic steering for a new electric unit. Also gone (thankfully) is the dimwitted 5 speed automatic, replaced by the excellent TorqeFlite 8 speed automatic with paddles on all Challengers, giving the ability to rev-match on downshifts when in manual mode. The 6 speed manual returns on R/T and SRT models. Engine choices are largely carry over with the base powerplant remaining the stellar 3.6L Pentastar V6 with 305hp while R/T models carry the standard 5.7L Hemi V8 with 375hp and 410lb-ft of torque. SRT models however see the greatest changes as Chrysler has now split that model in two. Standard SRT 392 Challengers retain the 6.4L Hemi V8 now subtly upgraded to 485hp and 475lb-ft of torque while the suitably named SRT Challenger Hellcat gets the supercharged Hemi.

Inside, the Challenger is also extensively redone. A 7 inch thin-film transistor screen is sits between the tachometer and speedometer in the driver’s gauge cluster and is able to display a variety of information including performance pages, navigation prompts and vehicle info. The center stack is also redesigned and includes Chrysler’s much heralded UConnect telematics system on either a 5″ or 8.4″ display. Other modern niceties include a standard rear view camera, lane departure warning, blind spot detection, forward collision alert and adaptive cruise control. The seats themselves are new, sporting either cloth or Nappa leather on upper trim models with the option for heat/cooled surfaces. A performance seat option is available which includes thicker bolstering along the sides and aluminum trim attempts to lighten the interior.

But its the other SRT Challenger, the Hellcat,  that will get Chrysler enthusiasts blood pumping.To make this beast, SRT engineers first threw out all of the standard 6.4L’s oily bits, leaving just the bare cast iron block. The engine was then destroked to 6.2L but strengthened cylinders, forged pistons and a massive 2.4L supercharger provided by IHI (the same outfit that provides superchargers to Mercedes) were added. The supercharger, routes incoming air through four heat exchangers (one for every pair of cylinders) before stuffing it into the intake ports. The twin-rotor design gulps air through an Air Catcher inlet, basically a hole punched into the driver’s side inboard marker light and spins up to 14,600 rpm.

Everything about the SRT Hellcat is extreme. Chrysler had to develop new dynamometers that were capable of not only testing but handling the Hellcat engine’s prodigious torque. Over two million hours were devoted to ensuring the Hellcat’s durability in extreme weather and everything a customer could throw at it. Repeated high speed runs were made as well as a stressful 24 hour running period, but the engine never broke a sweat. Hard to believe this is a series production engine.

The Challenger’s body was suitably toughened up to handle the engine’s power. A three stage adaptive suspension system allows the driver to tailor the drive experience and is accessed through the SRT Performance Pages app on the UConnect infotainment screen. Chrysler’s 8HP90 eight speed auto (built under license from ZF) was also upgraded with larger and stronger internals. The six speed manual from the Viper is also available and also upgraded with its own oil cooler to handle the Hellcat’s ferocity. Armed with P275/40ZR20 Pirelli P Zero Nero tires, the 20″ forged wheels will struggle to put down all 650lb-ft of torque (the rears that is) but their stickiness will work with the firmer suspension to tame the Challenger’s still-porky 4400 lbs when the roads get twisty. Inside, the SRT Hellcat benefits from all the interior upgrades apparent in the regular 2015 Challengers. The lucky owner will be presented with two keys. A black key, serving as the valet’s key, limits the engine to just (!) 500 hp and 4000 rpm,  locks away SRT Performance Pages while setting the suspension to Street mode and deletes first gear (if your teen wants to drive, THIS is the key to give ’em). The red key on the other hand, opens up all the above.

If 707 hp has you already salivating, the price will have you rushing to your nearest Dodge dealership. The SRT Hellcat with the standard six speed manual will have a base price of $60,990 which includes $995 for destination and a $2100 gas guzzler tax. Opt for the eight speed automatic and the gas guzzler tax drops to $1700 but tacks on $1995 for two pedal set up. Not only is the SRT Hellcat America’s most powerful mas produced car, but it’s the most affordable car with a horspower rating above 700. The only other cars to..err…challenge the SRT Hellcat’s numbers are in the realm of super-hyper exotica. Cars like the Ferrari F12 Berlinetta (731 hp) or LaFerrari (950 hp) or McLaren’s P1 (903 hp). The Lamborghini Aventador? A paltry 691 hp. Hell, even Chevy’s upcoming Corvette ZO6 can only muster a preliminary 650 hp. Let’s face it folks, the 2015 Dodge Challenger SRT Hellcat is now the defacto bargain of the year as far as dollar-per-horse is concerned. It will be pretty interesting to see how Ford and Chevy will respond to Dodge’s latest volley in these muscle car wars.

For now though, make my Hellcat black please.

Edit: We’ve recently learned that Viper boys need not fear the wrath of the Hellcat as SRT engineers have heard their cries of anguish and will seek to restore the Viper’s place atop the SRT hierarchy by possibly supercharging the 8.4L V10. No, the Hellcat Hemi won’t fit as the Viper’s hood is much too low. Also, those who’d like the practicality of four doors need not worry as the also-updated-for-2015 Charger will also inherit the Hellcat under its hood. Yay!