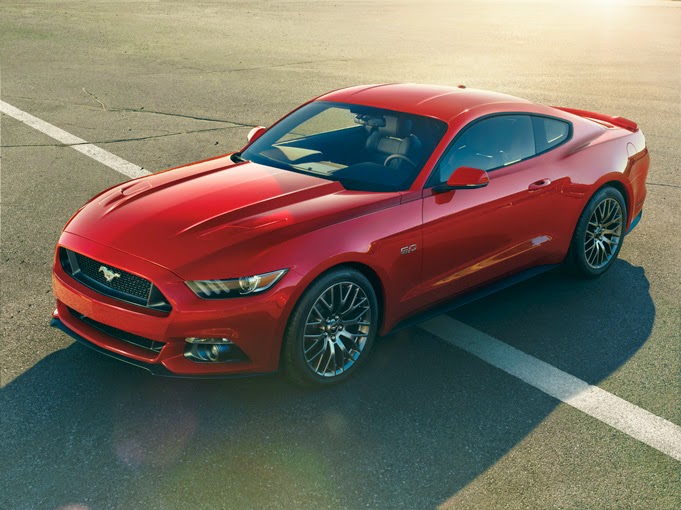 If you’re a fan of sports cars (or any car for that matter) saddled with live axle rear suspensions,stop reading right now.

The 2015 Ford Mustang is perhaps the most widely anticipated car this year, next to the Chevy Corvette Stingray. And for good reason. The sixth generation pony car marks not only the 50th anniversary of the model, but also the first fully comprehensive redesign since the Fox body took the reins for the Mustang’s underpinnings in the late 1970s. And with the redesign, comes a beautifully sculpted body that takes its inspiration from the Evos concept of 2012. While Ford shied away from diving into the deep end of the retro-design pool (like the 2005-2013 S197 generation), subtle cues in the body details and lines link the new Mustang to its predecessors. Let’s indulge shall we?

First let’s get this out of the way: the 2015 Mustang isn’t simply a 2-door Ford Fusion although the snouts do look similar. The design mantra first and foremost was “get it right”. That said, almost nothing from the previous generation was carried over, giving designers and engineers the freedom to get the proportions of the new car right. Fifty years of out-of-proportion looks and 1970s-era platform nip-and-tucking are swept out the door with the 2015 Mustang’s stunning new looks. A brand new platform, lighter and stronger than before provides a suitable anchor for the new independent rear suspension featuring a sophisticated multilink design (take that Camaro). The front end is fitted with struts featuring a ball jointed design that improves ride isolation and steering feel while allowing for bigger brakes to be fitted. The wheelbase is carried over but everything else was altered: the track was widened, the hood and roof lowered while overall length is a tad longer giving the Mustang a true performance stance. 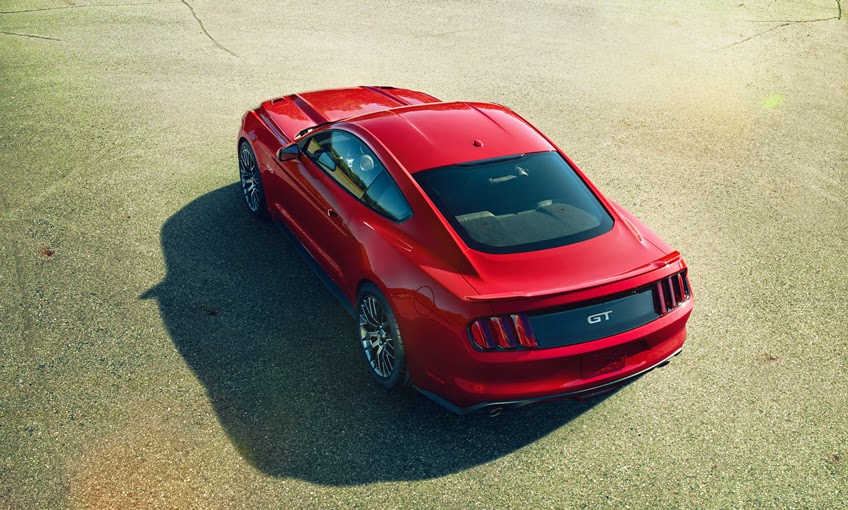 Outside, the 2015 Ford Mustang looks like no other. The shark-like snout features the pony emblem front-and-center in the grille while the headlights are slimmed and menacing, made all the more so by three diagonal light stripes in each bezel. The wide lower intakes add to the width of the car and the hood features details such as creasing that begins at the snout and a domed look to emphasize the power lurking beneath. From the side, the Mustang has heavy details in the sheetmetal with a character line that begins at the top of puffed-out front fenders, runs down the side just below the window and is then carried up over the similarly widened rear fender ending at the tail. The rear end is signature Mustang with individual, sequential three-light bar vertical tail lights framing a blackened center with the chrome pony emblem again in the center (GT models will have the letters ‘GT’ instead). Below that, a diffuser is framed by twin exhaust pipes. Overall, the exterior design is clean, crisp and new age edgy. On first glance, not only are you assured you’re looking at a Mustang but the design featured subtle cues that hark back to previous generations for example, the blacked out B pillar and the angled rear end. Low, mean, ready-to-pounce-on-Camaro-and-Challenger. Apt descriptors. 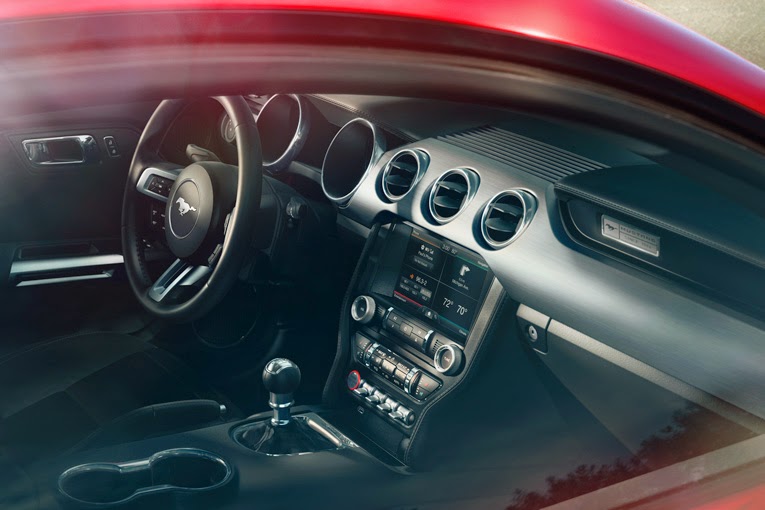 Inside, the Mustang finally leaves the 20th century behind in favor of higher end materials and a clean, sophisticated. almost aviator-like theme. Longtime Mustang owners will sing kumbaya at the sight of such advanced features as remote start, keyless entry, tire pressure monitoring and a track app for GT models which includes launch control. They might be divided at the thought of a drive mode selector coming between them and pure driving bliss but the majority should welcome the feature. With the selector, drivers will be able to choose between three stages of stability control thresholds, throttle input, steering feel, traction control and shift points on automatic equipped models. Row-your-own-gears Mustangs will also feature a new rev-match option similar to the kind on Nissan 370Zs. Of course, Sync and MyFord Touch are options as well as an abundance of USB and 12V ports. 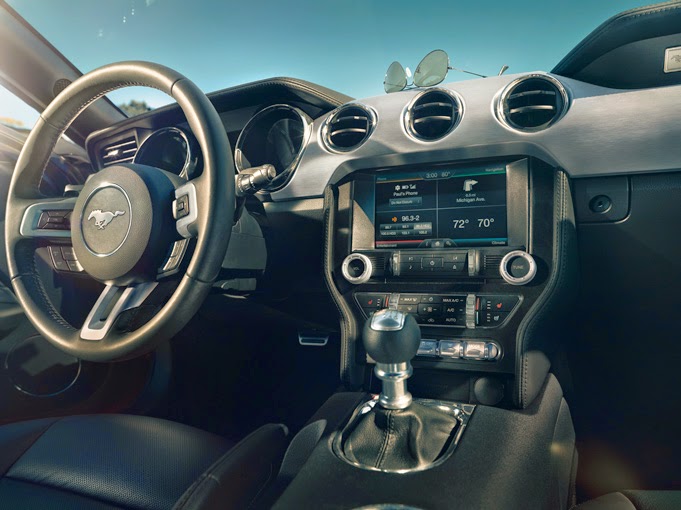 No Mustang would be worth its pony emblem without a lineup of engines to match the aggressive looks. With the 2015 model, the engines are more or less carried over with a few tweaks and one brand new option. First, base Mustangs carry on with a 3.7L V6 with 305hp and 280lb-ft of torque hooked up to either a 6 speed manual or 6 speed automatic. If you need a V8 in your life, the GT is your model and it carries a tweaked 5.0L V8 with engineering from the Boss 302 program. Expect output to exceed the current model’s 420hp and 390lb-ft of torque with your choice of either a manual or automatic, both also featuring 6 speeds. The real big news under the hood will excite those who long for a return of the SVO badge fitted 80s-era Mustangs. For the first time since 1986, the Mustang’s engine bay will play host to a turbocharged inline four with EcoBoost technology. Displacing 2.3L, the new mill will produce 305hp. matching the 3.7L V6 but trouncing it with over 300lb-ft of torque. A twin scroll turbocharger along with direct injection and variable timing along the valves are at the heart of this new engine (which will see duty in the upcoming Focus RS). 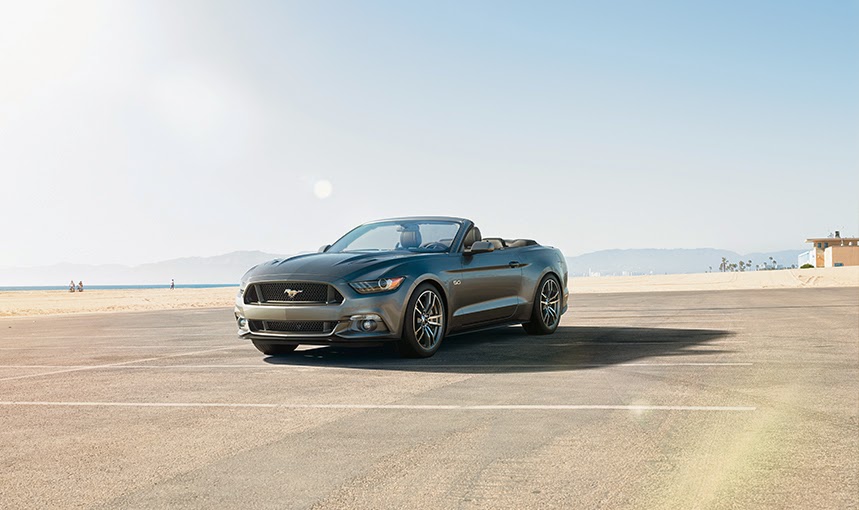 Pricing for the 2015 Mustang has elevated slightly. Base V6 models with manual transmissions start at $24,495 (add $1195 for the 6 speed automatic). The base EcoBoost model will begin at $25,995 (premium EcoBoost models will sticker for $29,995) while the base GT will open up at $32,925. The most expensive Mustang will be the GT Premium which starts at $36,925 and, of course, a wide range of options will be available. All MSRPs include a destination charge of $825. Convertible Mustangs will follow within a year of release with a a few thousand more greenbacks tacked on to their MSRPs. What would my ideal Mustang look like? Starting with a base GT with the 6 speed manual (while the EcoBoost is an enticing option, a V8 just sounds more proper and I like rowing my own gears) I’d add the GT Track Package for $2495 (includes front strut tower brace, gorgeous black 19″ wheels with summer tires, larger radiator, Brembo front brakes, heavier duty front springs, a Torsen rear limited slip differential and deletion of the rear spoiler…who needs it?), a Reverse Parking Sensor system for $295 (can’t scratch the paint) and the Recaro Cloth Front Seating for $1595. All in, we’re talking a track ready Mustang for $37,310. Oh, and let’s not forget that it would be painted in black….cuz that’s just how I roll. 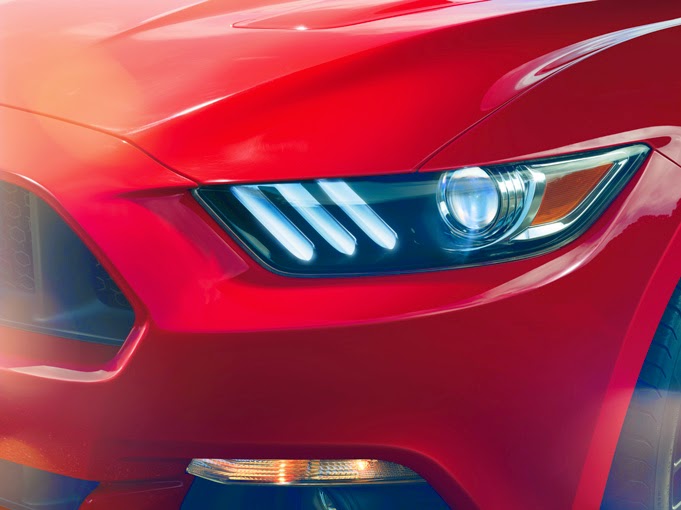 With a huge sweep of the broom, Ford has redesigned and re-engineered the 2015 Mustang in such a way that it is primed for the next 50 years. With styling that looks toward the future, cues that provide a glimpse in its past and swathe of engines that are powerful as well as efficient, the 2015 Ford Mustang looks set to take the muscle car wars to the next level. If your heart is still set on live axles, you’d better get a move on to your Ford dealer to catch the last of the 2014s. Otherwise, welcome to the 21st century pony car.