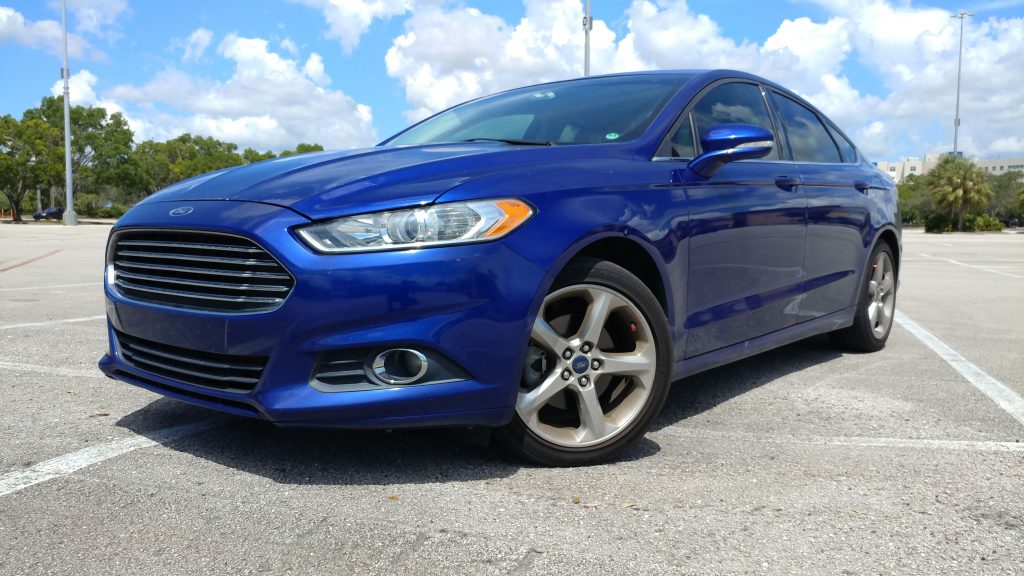 To say that our 2013 Ford Fusion SE has been a reliable Steed is an understatement. I’ll admit to having reservations about purchasing an American brand. All of my previous cars have been trouble-free (previous car excluded of course) but they were all Asian brands. Positive reviews about Ford, specifically the Fusion had me intrigued however. Would it be reliable? Can the SE (Sport Edition?) prove itself? Is the little 1.6-liter Ecoboost 4-cylinder up to pleasing my heavy right foot?

Solid. That’s how I describe the Fusion’s driving qualities. Getting up to speed, while not exactly effortless, is mostly a non-issue. Once at highway cruise, the Fusion tracks straight and true. The tiny turbo 1.6-liter has just enough oomph to pass slower traffic but above 80mph, it’s mostly out of breath. At steady-state cruising, the blue Ford is quiet and comfortable, often lulling our two year old to sleep. On back roads, the Fusion has just enough starch in the suspension to be entertaining, if not exactly willing. The 6-speed automatic is the weak spot here, unwilling if not downright refusing to downshift. A prod of the gas pedal and it will mostly cooperate but otherwise, it likes hustling to top gear as quickly as possible for fuel economy purposes. I mean’t what I said when I wrote this car’s introduction: there’s definitely more chassis than engine here. Speaking of fuel economy, we’ve been averaging something like 26 mpg. I credit my wife’s lighter and more delicate foot for keeping the mileage that high (she’s the Fusion’s main pilot after all). Also, the rocker switch on the transmission lever for manual operation? Still a joke.

Our Fusion has been a pillar of reliability since joining our garage. Other than regular maintenance (oil changes, brake service and a set of new tires), nothing has broken or given us pause. Well, there was one time when, after collecting the car from our local dealership for recall service, I noticed the A/C was not getting any colder….and getting hotter. Odd, since it was working when I dropped it off. I immediately made a U-turn back to the dealership to enquire about the car’s sudden penchant for air-frying its occupants. The dealer found some A/C hoses not reattached correctly after work was done to the 1.6-liter. Another night at the dealership and the Ford was trouble-free. Word to the wise: choose your dealer carefully. This was my second stint at this particular dealer for service and, while I wasn’t expecting luxury-class levels of service, as a customer you expect to be treated with respect.

The Ford was the subject of quite a few recalls. With 2013 being the launch year of this generation Fusion, it was sort of expected. The first model year of any new vehicle brings some teething problems that are not revealed until the model has matured over time. Such recalls included a coolant problem for the 1.6-liter Ecoboost engine, door latch issues, transmission cable linkages and seat belt pretensioners. None of these ever became a problem in daily use and the Fusion went down the road without issue.

Around the 98,000 mile range, I did a DIY tuneup by replacing the spark plugs, changing the air filters (engine and cabin air), cleaning the throttle body, MAP sensor and EGR valve. Oil changes were done with full synthetic every 3000-5000 miles, with the most recent being at 109,826 miles.

Besides being a commuter car, our Fusion has seen its share of road trips. Multiple stints to Southwest Florida, the occasional trek to Orlando and a few blasts to the Florida Keys proved the car’s appetite to reliably and quietly eat up the miles. The blue paint color, along with the sporty wheels and Aston Martin-esque looks gives the Fusion presence on date nights. When she cleans, she cleans up nice. While the practicality of crossovers is without question, the 3 box sedan can still hold its own and the Fusion is no exception. The large trunk can swallow quite a bit of luggage (careful of those goose-neck hinges however) and with the rear seats folded, cargo space expands significantly.

On long road trips, the Fusion hovered around 31-mpg, with the highest being 35-mpg when I was really determined to eke out as much efficiency as possible. Around town, we saw 24-mpg which is about average for the class. It also helps that, for a turbocharged engine, regular fuel is just fine.

Over 50,000 miles later, with the odometer hovering around 110, 000 miles, the Fusion feels like it can go another 100,000. It still feels tight and solid as the day we brought it home. Yes, there is some wear and tear that’s starting to show up (the front passenger door speaker sounds a bit tinny and the infotainment is showing its age with slowed response times), but otherwise the Fusion makes an excellent used car purchase.

Upcoming service items include a new set of tires, a brake service and a timing belt/engine cooling service at 130,000 miles according to the maintenance intervals. I’m also toying with finally getting some LEDs for the headlights and fog lamps. Finally, it would be nice to have a navigation system in the car instead of relying on our phones. The installation process is simple and straightforward, cost is minimal and unlocks the full potential of Ford’s often lambasted MyFord Touch.

It’s a shame that Ford is discontinuing the Fusion sedan as I really believe that the manufacturer had a winner on its hands. So far our 2013 Ford Fusion has been mostly trouble free, providing reliable and comfortable transport for the last four years. It looks set to continue that spot-free record!