The other day I was driving home from work, stopped at a traffic light with my music blasting (as per usual). I happened to notice a late model Volkswagen Jetta in the lane next time, cute girl behind the wheel (windows up). Light goes green and I drive off, but was caught off guard by the sound of her car as she revved the engine thinking it was an impromptu race. No, I wasn’t caught of guard by the race itself (I was more than ready) but more so by the sound of her car itself.

“Is that a lawnmower or weed whacker under the hood?” I thought.

Current Jetta models are powered by a trio of engines, from a 2.0 TDI diesel inline 4, a 2.5 inline 5 gasoline and a 2.0T turbocharged inline 4. I would’ve thought that this girl had the TDI motor but the racket she was making caused me to slow down and let her pass so I could see the car’s rear. Nope. 2.5 on the decklid.

Now 5 cylinder engines aren’t known to be inherently smooth motors, neither are regular 4 cylinders (though Honda and Toyota would object to that) but the 5 cylinder in the Jetta is positively raucous, and not in a good way. When you buy a car, is the smoothness and sound of the engine a factor? Or are the car’s visual aesthetics enough to seal the deal? I dunno about you, but if a car’s engine sounds like it’s wheezing though the hood, it’s a deal breaker. Don’t get me wrong, the Jetta itself is a great driving car, Germanic in its handling and stability (VW likes to brag about its cars being tuned for the German autobahn), but if you’ve got your eye on one, I’d suggest spending the extra cash for either the TDI or GLI model with the 2.0T.

With the TDI motor, yes it’s a diesel and yes, most Americans associate the diesel engine with black smoke, big rig trucks and the clackety-clack of valves under the bonnet. But I assure you, modern day diesels in passenger cars are waaaaaay beyond what you think. Volkswagen has done its homework in making the diesel engine suitable for civilian use in everyday cars by cleaning up the emissions, quieting the motor, so much so that it’s barely audible at idle. Another highlight of diesel engines is torque and the 2.0 TDI doesn’t disappoint here. It may only have 140hp, but it’s the 236lb-ft of torque on tap from idle that will really get your attention off line. The other plus? How about 40 mpg on the highway? Seriously, a nearly 600 mile range isn’t out of the question with this motor. 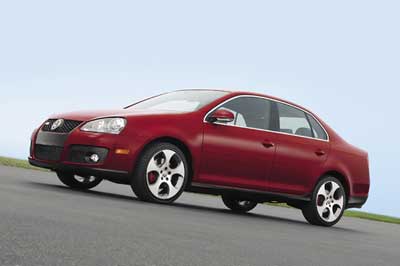 The 2.0T motor is essentially the same unit in the vaunted GTI. Producing 200hp and 207lb-ft of torque and assisted by suspension tweaks, the Jetta really comes alive in this guise. Having driven my brother’s 2006 GTI I can safely say that it is a hoot to drive. The 2.5 motor? Honestly, you don’t want it. If I had to drive around listening to this motor I’d either hang myself or do the next best thing and buy a Corolla. The Toyota may be a snooze to drive, but at least the engine is way more refined in its sounds.

So would I buy a Jetta? Sure I would.