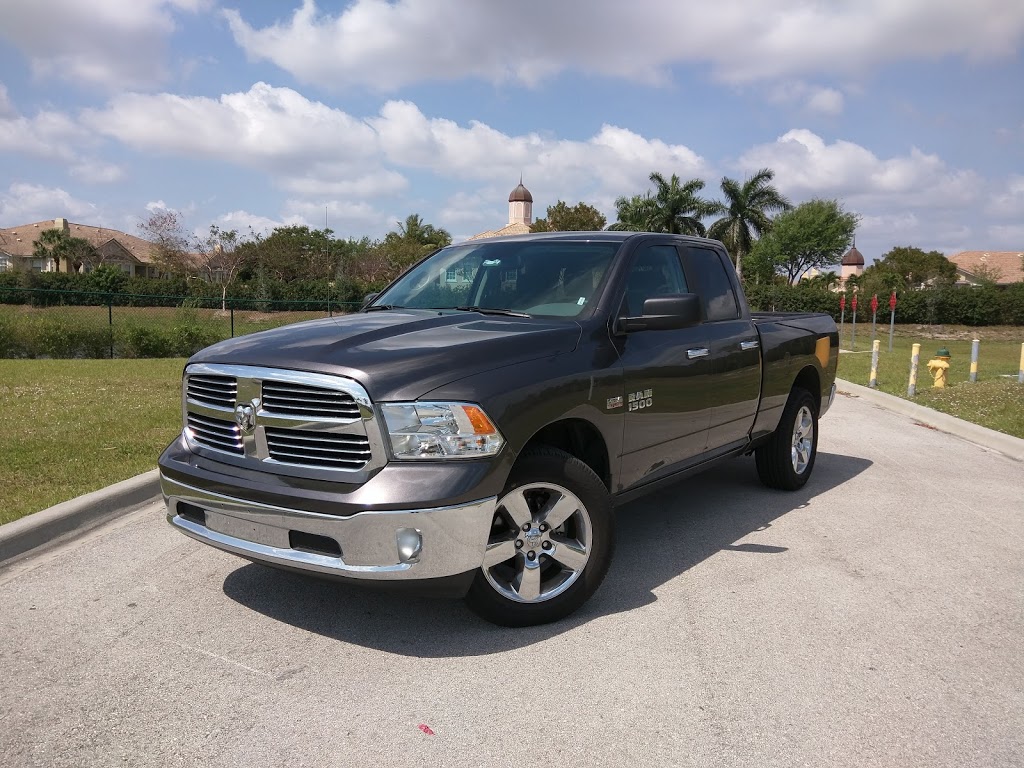 What happens when you take a strapping young fellow who’s been driving sedans for the last 20 years and put him in a half-ton truck for a week?

I’ll tell you what, he gains a new appreciation for those drivers who commute in these beasts on a daily basis.

Not that I’ve never driven a truck for a day or two before. During each of those times, the experience was um, hairy-chested to say the least but, mercifully short when reality set in. This time around, an opportunity that was a bit negative at first, presented itself. Since my regular car, *ahem* the STEED, was totaled a few days prior and the rental car agency had no sedans available, I took a long look at a big Ram Quad Cab truck sitting in a corner and quietly whispered to myself, “YOLO!”

I decided that, barring the progress made on finding a permanent vehicle replacement, the Ram would serve as the all-purpose vehicle for a week. Walking around the truck, I began to take in its sheer size. The big cross-hair grille is front and center in all its chromed and slatted glory. Flanked by angled headlights with a large lower bumper (also chromed out) integrating fog lights at the corners, the whole ‘face’ juts forward slightly. See this grille coming up fast in your rear view mirror and you’ll be instantly intimidated to move over. Hell, if this truck were doing one twenty on the German autobahn, I’m pretty sure more exotic material wouldn’t hesitate to get out of its way. Being a Quad Cab (in Ram-speak), this 1500 half-ton model has four doors, two regular sized (but surprisingly light) front doors and two smaller doors behind them. Don’t be fooled, this isn’t a true crewcab design, but the interior is surprisingly roomy. The truck bed measures 6’4″ in length and was not equipped with a bedliner, but the big, bright dual exhaust tips are nice styling feature and call out to the brawn under the large hood. Taken as a whole, this Ram 1500 seems to be the “trucker’s pickup” compared to its rivals from Chevy and Ford.

Inside, however, you could be fooled into thinking the cabin belonged to a full sized sedan. Material quality exceeds that of many cars I can think of and storage space is abundant. The front space is occupied by comfortable bucket seats with a large center cubby, useful for storing folders and big enough to stash a small laptop. Three cup holders adorn the front of the cubby, large enough for your 7 Eleven Big Gulp. When maximum seating is needed, it folds up to fit a sixth person, though he’d/she’d better be of small stature and not mind a 5-10 minute ride to the store. A bench occupies the rear of the cabin but even there, space is adequate and, when not in use, can be folded up to reveal yet more storage space underneath. The dashboard feels richer than you’d think for a truck and panel gaps are nice and tight. With the amount of ‘RAM” and “Big Horn” logos dotting the cabin, you’ll never forget what brand truck you’re in. Instead of the big 8.4″ screen, this tester was fitted with the one-step down UConnect package consisting of a 5″ touchscreen with integrated Bluetooth and voice command. A smaller LED screen sits between the speedometer and RPM gauge and provides a variety of vehicle information. One curiosity is the electronic rotary gear selector placed just under and to the right of the steering wheel. In such a large vehicle that’s meant to work, operating the selector feels rather dainty. P, R, N, D are your choices with manual gear selection available by using buttons mounted on the steering wheel. Shift paddles would be a better choice but in operation, I imagine an owner would only use these buttons when towing something.

Speaking of towing, this truck is certainly equipped for the job. The 5.7L HEMI V8 rumbles to life on startup, scaring some squirrels a few times. With 390hp and 407lb-ft of torque, the roughly 5700lb Ram feels surprisingly light on its feet and power is but a throttle tap away. Doling out the power is a ZF eight-speed automatic which, when compared to the five speed unit attached to essentially the same engine in a Chrysler 300C I tested a few years ago, feels much quicker in response to throttle inputs and was vastly smoother in operation. The ride was also much better and less busy than a 2014 Chevy Silverado I drove briefly a few months ago. Credit Chrysler for turning the truck world on its head and fitting the Ram’s rear suspension with coils rather than traditional leaf springs. Though still sporting a solid rear axle, coil springs give a vastly improved ride and better wheel control than leaf springs and Chrysler engineers managed to preserve the Ram’s load carrying capability, now rated at 10,490lbs. Pretty much equal to what Ford and Chevy boast. As an option, the Ram can even be fitted with an air suspension but this was absent on my tester. Still I was pleasantly surprised at the truck’s demeanor on the road. You don’t forget that you’re driving something big and heavy but at the same time, controlling it is easy. It’s not hard to get into a comfortable driving position and the doing so gives you a clear view of the corners of the big hood, though you’re always conscious of blind spots. Backing up would be easier if a rear-view camera was standard but as this was also absent, I had to proceed with caution. You can easily lose a compact car behind the tailgate if you’re not careful.

On the highway, the Ram was relaxed and offered ample stability. Loafing along at 1400 rpm, I managed to get a constant 21 mpg on the instant fuel economy readout, the HEMI softly rumbling in the background. The 8 speed automatic certainly helps along with the V8’s standard cylinder deactivation system which shuts down four of the eight cylinders under light loads. The Ram would make an excellent road trip vehicle. In urban settings however, this 19 ft vehicle is a chore. A huge turning circle and a 140″ wheelbase does not lead to a maneuverable machine. Not to mention running some in-city errands quickly dropped my fuel economy to around 12 mpg. Well, that an hearing the HEMI roar under full throttle is intoxicating, if not economical. (Yes, I have a heavy right foot). Despite this, in mixed driving over the course of a week, I managed to get 16 mpg. Not bad for a heavy, V8, four door truck. Sure the EPA rates this vehicle at 15 city/22 highway, but in the real world you’ll probably get worse, especially if you use the Ram for its intended purpose.

At the end of the week, I asked myself if I could really live with this truck. Yes, I did have dreams of owning a boat one day and towing with a HEMI-powered truck to the docks. But honestly, this was a smidge too much truck for me. The 26 gallon fuel tank certainly helps to make fillups infrequent but still pricey and if your trips don’t involve lots of highway travel and towing you’re probably better off with the standard Pentastar 3.6L V6. Sure it’s no HEMI and it screams more than it rumbles, but rated at just over 300hp, it’ll do 80% of what the uplevel V8 can. Plus it will get much better fuel economy doing so. In my week with the 2016 Ram 1500, while I enjoyed driving it, I also felt like I was doing it a disservice. This truck wants to work and my daily errands didn’t offer much opportunity to really test the strength of this vehicle. That said, if you can afford the cost of driving it, it’ll certainly do its job well. If towing or hauling doesn’t comprise much of your day it’s all good. Just hearing that 390hp monster under hood will bring a smile to your face everyday. Hell, I’m still smiling.

As of this writing, the search for a new vehicle is still ongoing. In the meantime, I’ve got another vehicle reviewing and I hope to complete the search pretty soon. Thanks to Omar at Enterprise!