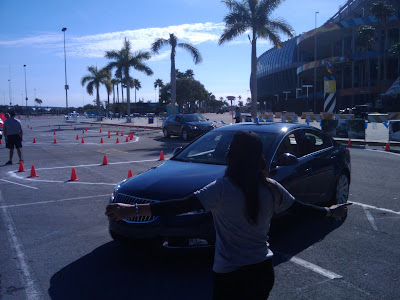 Are these really Buicks?

No. That is of course, if you’re the kind of person to take the superficial view of looking at these good looking cars as being merely badge engineered efforts on GM’s part. You may be right, especially if you know GM’s history of simply rebadging cars to satisfy each of the car lines under its roof. But nowadays, badge engineering is more than just simply slapping a Buick badge on to what was a Pontiac sedan (R.I.P.). GM’s excellent Epsilon mid-large size architecture is now in its second generation and with this redesign, can be altered to suit each of GM’s badges and their individual customer bases.

It used to be that if you were considering a Buick (ANY Buick), maybe your hair had a coat of gray (or white) and you were retired (or already retired) in Palm Beach, FL. Of all GM’s brands, Buick has the oldest customer base in terms of age (though they are a loyal bunch) and prior to about five or 6 years ago, it was easy to see why. Buick’s cars rode on soft suspensions, had painfully slow steering and were huge for FWD cars. Perfect for your grandma to schlep her friends to bingo night or for grandpa to stuff his golf clubs and not think twice about trunk space. As a matter of fact, both Buick and its cousin Cadillac were at one point chasing the same customer until 2003 when Cadillac underwent a major renaissance with the introduction of the CTS line and thus started aspiring to be a Bimmer/Benz competitor. Wanting a younger customer base, but without resorting the kind of performance oriented target of Cadillac, GM heads decided Buick would enhance its premium image by targeting Lexus buyers. 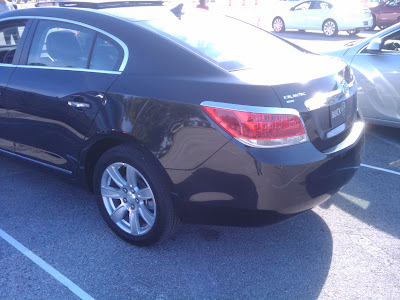 The Buick Lacrosse was introduced as a 2005 model riding on the enhanced, yet aging, W platform that underpinned the Chevy Impala and Pontiac Grand Prix. The latest generation introduced for 2010 rides atop a super sized Epsilon platform engineered by GM’s European arm, Opel. Purposed to steal Lexus customers, who would otherwise be driving ES350s, the Lacrosse provides an excellent competitor to the venerable Lexus in terms of ride, interior quality, price value and technology. The Lacrosse is available with either a 2.4L direct injected Ecotec 4 cylinder with 182hp or a more powerful 3.6L direct injected V6 with 280hp. All wheel drive is available only on models equipped with the V6 and at GM’s recent Main Street In Motion event, I sampled V6 models equipped with both AWD and standard FWD along with 6 speed automatic transmissions. GM also offered a Lexus ES350 as well as an Acura TL for comparison. 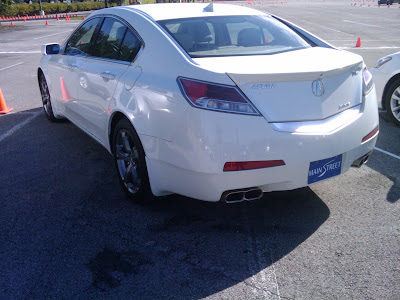 Through the driving section, the AWD Lacrosse proved secure and stable in handling and was a willing partner through the turns when pushed. However, unlike the TL which had a performance tuned AWD system (aptly named SH-AWD or Super Handling All Wheel Drive) the AWD Lacrosse’ system is tuned more for secure handling rather than all out performance and understeer was prevalent. The ES350 disliked the handling course and voiced its displeasure by understeering far earlier than the Lacrosse and rolling more. Acceleration was strong in both with the 305hp TL clearly being the performance champ. In conclusion, the Lacrosse effectively splits the different between the soft cruising Lexus and the performance oriented Acura by being able to cruise serenely and quietly like the Lexus (although its suspension was a tad firmer) while being a willing partner should the driver be in a playful mood. 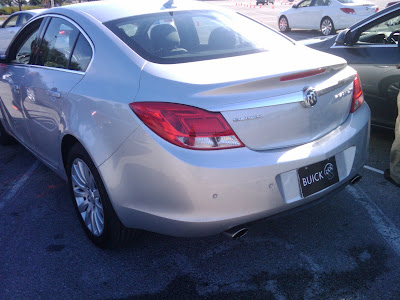 The new Regal, also built on the Epsilon platform but with a shorter wheelbase, is tasked with being more performance oriented than the Lacrosse and stealing even younger buyers away from Acura. Its mission is evident at the first corner, where quick steering is followed by the suspension taking a set and holding the line, quite similarly to the TSX available for comparison. Powered by the same 182hp Ecotec 4 cylinder as the larger Lacrosse in base models, power is merely adequate in comparison to the TSX’s 201hp 2.4 inline 4 owing in large part to the Regal’s greater weight. The Regal is also available with a turbocharged and direct injected 2.0 inline, producing 220hp. Both models at the event came with 6 speed automatic transmissions with manual modes (which proved more gimmicky than practical). The Regal was a great performer on the handling course, managing weight and roll extremely well. Acceleration however, particularly with the turbocharged 4, was surprisingly off the pace of the 19hp-down TSX but this could be due to the Acura’s lighter weight. I expressed this to one of the Buick officials present and was informed that a higher performance Regal GS would be released later this year with a high output 255hp version of the turbocharged Ecotec engine.

In conclusion, Buick has managed to create credible competition for Lexus and Acura. The Lacrosse, in my opinion, equals the Lexus for handling, interior quality and value (base price is a bit below that of the ES350). It manages to involve the driver rather than isolate and numb from the experience. The Lacrosse can never hope to come anywhere near the performance of the Acura TL, even though it does offer the driver a chance to play; something the Lexus ES350 despises.

The Regal is a good effort for Buick and offers comparable qualities to the Acura TSX, though a serious weight loss plan is needed to effectively meet the TSX on equal terms. The Epsilon platform provides a good foundation for refinement and, no doubt about it, if Buick is serious about performance, the Regal could come closer to the bullseye with the next redesign.

It used to be that I’d never consider a Buick, or recommend it to anyone for that matter. I still wouldn’t consider it for my own personal ride (although if the Regal GS turns out to be the ultimate expression of sportiness, I could change my mind) but to someone considering a Lexus ES as their next purchase, I’d say to check out the Lacrosse before you make a final decision. It’s too good a car not to pass up.