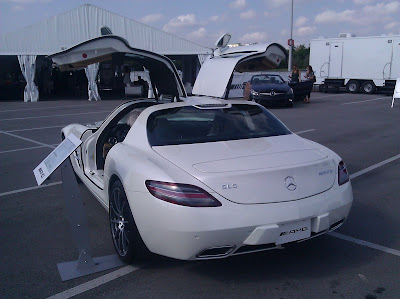 “The exhaust has a hint of Messerschmitt BF109 in it.”

That was a comment overheard by one of the participants while waiting in line to test the new Mercedes C63 AMG. Obviously, this man was an aviation buff like myself and I totally agree with his statement. It was pure aural bliss listening to the AMG machines gathered at this event rip off the starting line, the big 6.2 V8s howling through bazooka exhaust pipes. Yes folks, here I am along with my esteemed colleague and fellow car buff Robert Mullings, at recent Mercedes AMG Driving event where participants get the chance to drive four of Mercedes’ wondrous AMG models. I say wondrous because, prior to this day, my perception of AMG cars was that of being all engine (i.e. straightline speed) and nothing else. However, this new crop of models seek to change that and prove that Mercedes can not only surpass rivals in terms of power but also challenge them on the track as well. 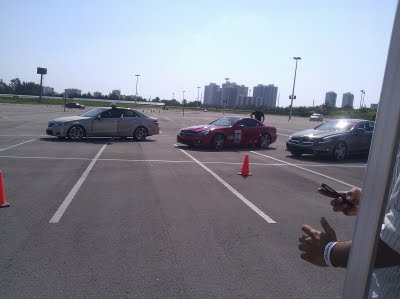 The models available for thrashing, er, driving today include the previously mentioned C63 AMG which is normally available with a 451hp version of AMG’s corporate 6.2 liter V8, but uprated to 481hp in these particular iterations thanks to a Sports option that includes a firmer suspension and more luxury/technology items. The others include the slightly larger E63 sedan, the SL63 roadster and the brand new CLS63. Some clarification is needed here. While the C, E and SL employ the 6.2 V8 in various states of tune (the E and SL have power ratings that fall between 516hp-525hp) the CLS uses a smaller 5.5 V8. Don’t think for once though that the CLS is down on power. In a nod to the ever present need for increased efficiency and lower fuel consumption, AMG engineers have fortified this V8 with direct fuel injection and two twin scroll turbochargers with a combined 18psi of boost. Standard power output is pegged at 518hp and 516lb-ft of torque, matching the 6.2 but trouncing its 465lb-ft with 518lb-ft. An optional Performance package increases turbo boost pressure and results in a ridiculous 550hp and 590lb-ft of torque: absurd power ratings for a vehicle that’s slightly larger than the E-Class. Power is channeled through a new MCT 7 speed transmission which can program shift settings from comfortable to sport and provides for manual shifting via paddles located behind the steering. 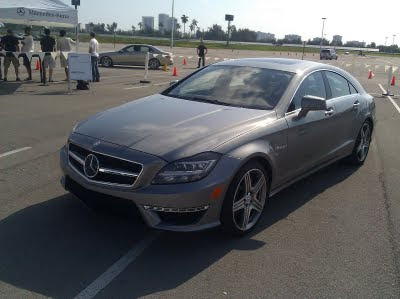 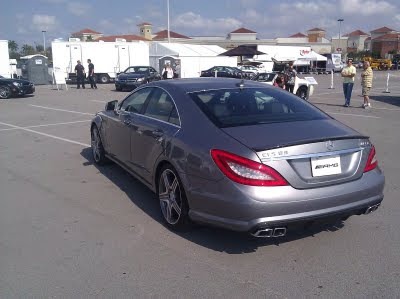 Not available for testing but on display next to the track, a new CL63, Mercedes full-sized coupe employs the same 5.5 twin turbo V8 and front and center stood the pinnacle of AMG’s lineup: the SLS supercar. Fashioned on the famous Gullwing car of the 1950s, the SLS is a modern interpretation of the original and employs a 563hp version of the 6.2 V8. Enough static displays…let’s drive! 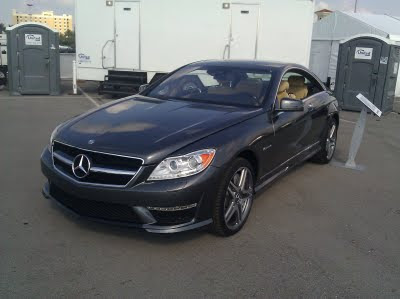 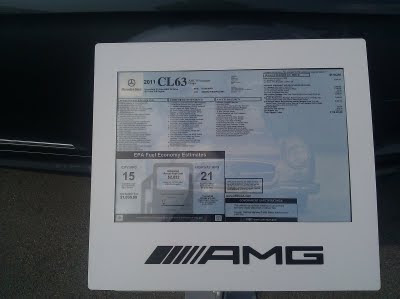 Initially we were allowed seven runs with the vehicles present but was eventually preened to four due to the large number of participants. One colleague who had arrived earlier, got some advice from the attendants present to save the C63 for the last run and start the day learning the track with the E63. Duly noted. The BMW M5 would be my yardstick for performance and, if the E was anything I had read about previously, it should come pretty close to the M5 benchmark. Lining up at the starting grid, I waited till the previous car was well ahead before nailing the throttle. What happened next was a bit of a blur, but what I can remember involved a huge grin, expletives of joy and aural bliss. The E63 rocketed forward with the immediacy and fury of a round being fired from the cannon of a battleship. The howl that flooded the cabin was intoxicating and before I knew it, the first corner presented itself with the AMG instructor in the passenger seat shouting “BRAKE! BRAKE!”. Hard on the brakes, the E63 scrubbed speed effortlessly and snaked through the turn. Back on the throttle briefly, the next turn loomed and the fluid way in which the E63 snaked its way through the turns was downright impressive. Throttle response was immediate and the brakes were fantastic at slowing the E63 down from speed. After the run, I do remember nailing a cone through a high speed jink in the track, but other than that I’d call the track learned.

The E63 presented such an aural pleasure that, knowing the C63 would only add to that, I decided to compare the 6.2 with the new twin turbo V8 in the CLS63. Listening to the participants take turns in the CLS, it was evident that the boosted nature of the 5.5 liter has muffled the exhaust note compared to the naturally aspirated 6.2. Granted, you can tell there’s immense power under the hood but the sound isn’t as visceral as the E63 (or the C63 for that matter). In any event, when it was finally my turn the AMG instructor ensured that the settings were all in sport, lowering the suspension, increasing throttle response and aggressively mapping the 7 speed’s shift points. Flooring the gas, the subdued note of the engine was confirmed, but a hint of turbo whistle was noticed. None of that mattered however, because if the E63 managed to push me back into the seat, the CLS absolutely shoved me in and contorted my face for good measure. That folks is what almost 600lb-ft of torque can do when accelerating from a standstill. The CLS might be slightly larger than the E63, but it dances just as well through the corners. Responses from the helm were immediate and the 7 speed, left to its own devices, was always in the appropriate gear. This new boosted mill, might have lost a bit of its voice compared to the 6.2, but it loses nothing in power and, as icing on the cake, is over 25% more fuel efficient.

Having satisfied my comparison test with the CLS, it was now time to enter maximum attack mode with the C63. The smaller AMG model, might be down on power compared to the larger cars, but 481hp is nothing to sneeze at when you consider the 400lb lighter curb weight. The M3 V8’s 414hp output is already stomped on by the C63, but if it dances just as well as the Bimmer around the track then the Bavarians really do need to start paying attention. Sport settings engaged with the car at a complete stop, the AMG instructor noticed my anticipation: “You’re in attack mode aren’t you?” I smiled back and nodded a gentle yes. “Well then go for it!” 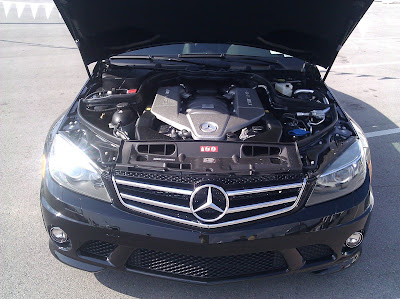 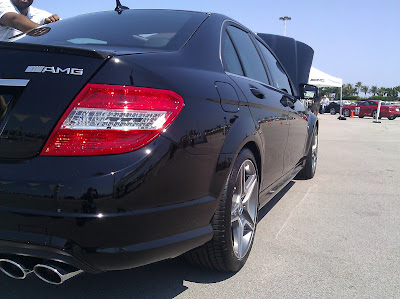 Flooring the gas I was met by the same aural goodness I experienced earlier in the E63, only amplified by the C63’s slightly larger tail pipes. In this smaller package, responses were more direct and immediate and, displaying the same powerful braking force as the E63, I set up for the corner. Whoa! This thing flies! The transmission and engine worked in perfect harmony, holding gears to the RPM limiter and blipping the throttle during braking. I hit every apex and corner and, once I got on the power, the C63 simply shoots down the straights. If the track had allowed for a true race between the two, the M3 would still hold the edge in the corners. However, the C63’s 67hp advantage would mean that on a long straight, the M3 would be passed. The M3’s responses are just that much more immediate and direct in comparison to the C63, but it does lack the explosive power of the C63’s big bore V8. Where the M3 needs to be revved to make power, the C63’s in available immediately and all through the rev range. Besides, the M3’s paltry 295lb-ft (bested by the regular 335i’s boosted inline 6 cylinder’s 300lb-ft) can’t hold a candle to the 443lb-ft the C63 grunts out.

AMG has come a long way since being an outside tuner of Mercedes vehicles. Having being brought inhouse to the Mercedes fold, AMG has become the tip to the spear. No longer content with producing cars that were more about power than handling (remember the infamous Hammer?), this latest crop of products proves that AMG is consistently challenging the benchmarks of the sports sedan world.