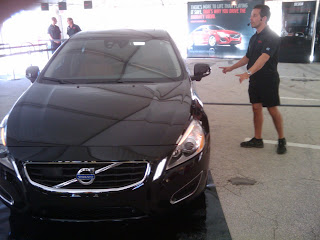 The following is a guest review of the 2011 Volvo S60 T6 AWD by my good friend and avid auto enthusiast, David Mullings. Look out for more guest reviews from him as well as others in the near future!

I was fortunate enough to attend the recent Volvo test drive event in Miami with the writer of this blog and was asked to provide my own perspective. After driving the new S60 at least 6 times for the day, I know that Volvo has definitely changed my perception of the brand. As a past fan of British Touring Cr Championship I was familiar with the S40 that raced in the past (I even considered purchasing and modifying one).

Volvo’s new S60 certainly will be considered when next I seek to purchase a car because the handling was solid, certainly better than the Audi A4 and BMW 328i provided for comparison, more powerful thanks to the turbo and fairly comfortable. The space behind the driver seat still leaves a lot to be desired when the driver is tall but that is common to all luxury cars at this level. I did however have a few issues with the S60 that will most likely not lead to a purchase:

1) Volvo did not have the Infiniti G37 or Lexus IS250/350 for comparison testing. I suspect that is because those two cars might shame the S60 in ways that Volvo did not want to happen

2) My 2008 Mitsubishi Lancer GT with tiptronic tansmission and paddle-shifters handles even better than the S60 (my GT came stock with a front strut bar) and the transmission is far more responsive. The most annoying part of the S60’s tiptronic mode was that it would automatically change gears even though I specifically put it in 2nd gear in an effort to stay in the sweet spot of the turbo to avoid lag as much as possible. My cheaper Mitsubishi doesn’t do that.

3) As a past owner of a Mitsubishi Lancer Evolution 9, the turbo in the S60 had too much lag and thanks to the not-so-smart tiptronic, did not give me the control I was looking for when cornering and exiting. Yes, comparing a manual to an automatic is not that fair but then they should have offered the S60 in a manual version for people who really wanted to enjoy the turbo properly or do more about the lag.

In short, the S60 would fall higher on my list than an Audi A4 (not an S4 of course) and a BMW (not an M3 of course) but most likely lower than an IS250, a G37 and even my Mitsubishi Lancer GT. Volvo did not bring us to the test drive event to check out the nice leather interior, they wanted us to be naughty and spank that car.

It definitely proved to be quite naughty but probably not naughty enough for me. Would I recommend to the average person as a daily driver? Without a doubt. I personally am looking for tighter handling, less turbo lag and less intrusive Tiptronic system.