With gas prices predicted to surpass $4/gallon by the end of the year, it’s no surprise that people are looking for ever more efficient cars. It’s really an exciting (albeit expensive) time we live in in terms of automotive technology. We have the meeting of two technologies (gas engines and electric motors) to form an efficient vehicle called the hybrid, of which the Toyota Prius has become the poster child. Nowadays, it’s not the only option. Ford has a hybrid Fusion on sale with plans for an all electric Focus in a year or so and Hyundai has a hybrid version of its popular Sonata sedan. Chevrolet recently introduced its range-extended plug-in electric car, the Volt (a review of this comes later) but Nissan has leaped them all with the introduction of its all electric Leaf. I recently had the opportunity to take one on a test drive at a sponsored event and it was indeed a learning experience. 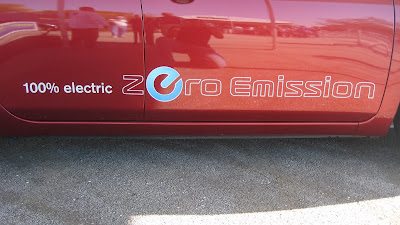 Nissan might not be the first name most people think of when it comes to electric cars (that distinction belongs to Toyota and its Prius) but the fact is that the technology has been a steady part of their research and development since 1947. Most of their prototypes have been standard production cars rebuilt around batteries and electric motors, but the new Leaf is a completely ground-up design with the latest in battery and electric motor technology. At its heart is a 24 kW lithium ion battery pack consisting of 48 separate modules built low and within the car’s wheelbase. According to officials, this gives the Leaf a low center of gravity and, as any sports car enthusiast will tell you, enhances stability and transient responses from the Leaf’s electric steering. The Leaf is one of the first mass production electric vehicles to use this advanced power source and its provides for an average range of 100 miles on a full charge, though it was noted that in tests range varied from as high as 130 miles to as low as 70 miles. The batteries feed an 80 kW electric motor that’s good for 107hp and 207lb-ft of torque, the latter of which is available instantly. Charging the batteries using a normal 110/120 volt outlet takes almost 20 hours (likened to filling up a swimming pool with a garden hose) while a 220/240 volt home charging station (a $1500 investment for the new owner) cuts that time down to 8 hours. If an owner wishes, a quick charging station can be installed that cuts that time even further to just 30 minutes. Due to the various peak hours of an electricity grid, the Leaf’s charging system can be programmed to charge the batteries during off-peak hours to take advantage of lower rates.

Charging port in the nose

Walking up to a Leaf, aerodynamics wouldn’t be the first thing that come to mind but the fact is that Nissan spent a considerable amount of time enhancing and refining the Leaf’s aerodynamic shape. More time than was spent on the GT-R amazingly. The aim was to make the Leaf as slippery through the wind as possible and the details show themselves from the distinct shaping of the headlights, to the steeply raked windshield and the contoured body sides. The wheels themselves employ a design that keeps the wind from buffeting around the wheel wells and the underside is completely flat in order to keep air moving.

Moving inside, the Leaf provides an expansive and airy cabin for 4 (or 5 in a pinch) with good quality materials throughout the cabin. It’s no luxury car, but it’s no penalty box either. Instead of the usual gas engine instruments, the driver is faced with an LED screen behind the steering wheel and another in the center console, the first of which displays information pertinent to both the electric motor and battery pack, showing things like range, amount of charge left and other vitals. The Leaf’s navigation system takes into account the battery pack’s state of charge and shows the range as a blue circle around the Leaf’s present location. For the range anxious, another push of a button displays the available charging stations within a requested radius. Two models of the Leaf are available, the SV version starts at $33600 (excluding a $7500 tax rebate) while for an extra $950, the SL version adds automatic headlights, LED running lights and a solar panel at the rear end of the roof to power a 12 volt battery used to run the car’s entertainment systems. 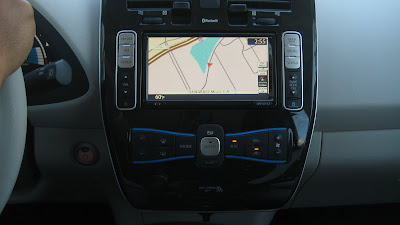 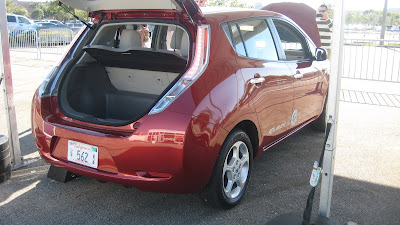 On the road, I was pleasantly surprised at the Leaf’s normal driving demeanor. Acceleration was peppy, given the instant torque available from the electric motor and transient responses were as I expected, given the low center of gravity. The steering however, like most electric systems, feels wooden and lacked information as to what the front wheels were doing. Two driving modes are available, the first being a normal mode where the motor’s full power is provided, the latter being an ECO mode. This limits power delivery and I can see this being used in a strictly urban environment. The ride was very good, stable and quiet (befitting a car without a gas engine), the only noise being the conversation inside the cabin and the tire noise from OTHER cars.

The other plus for the Leaf is the maintenance involved, or lack of it. According to officials, regular maintenance is due only once a year (or roughly every 12,000 miles) consisting of topping off fluids, tire rotations and inspections of the drivetrain. Nissan picks up the first 3 years of maintenance while the warranties are split up as follows:

Nissan assured me that any individual module in the battery pack that fails can be replaced without replacing the entire pack, one of the primary concerns among the group present. Of course, the Leaf’s success is in part dependent on there being a reliable charging network throughout the primary market areas and again, we were assured that the infrastructure is being implemented.

The Leaf is a breakthrough for Nissan, being the first fully electric vehicle available for outright purchase and its significance is tempered only by the surge of hybrid and range extended vehicles becoming available. A prime competitor for the Leaf is the also just-released Chevrolet Volt, itself also a plug-in electric vehicle. However, the Volt neutralizes the Leaf’s limited electric only range (and thus the fears of the range anxious) by using a small gas motor to recharge the batteries should they reach a depleted state.

For someone with a short commute (and who’s ready to be weaned from gasoline) the Nissan Leaf offers a solid (if initially expensive) gas-free alternative and as charging stations become more common, range anxiety will all but dwindle.

Many thanks to Lauren for being my photographer, camerawoman and partner-in-crime

0 thoughts on “Nissan Leaf – Electric Vehicle For All?”