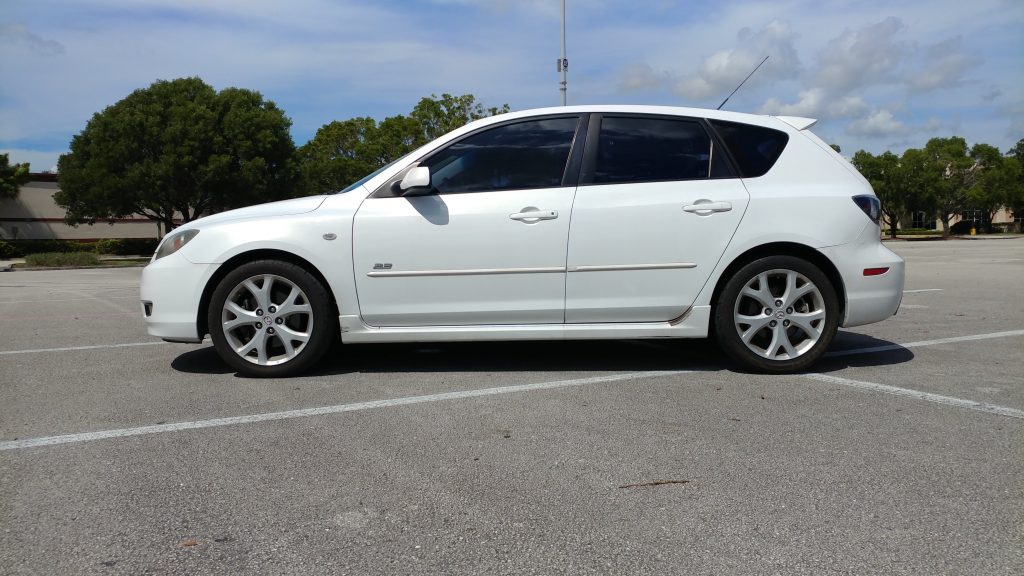 So there I was, doing the first oil change on the Mazda a few months ago. What should’ve been a 45 minute job at most, turned into several hours of multiple trips to the parts store, swearing and a hell of a cleanup. All because of a stupid oil filter. Or rather, a cheaply designed one. See, when you think of an oil filter (for those of you who know), you think of a coffee can-sized cannister that simply screws on and off. Right? Not so fast. The 2.3-liter engine in the Mazda 3 (and base Mazda 6 from the same era) actually uses a cartridge paper oil filter that requires some disassembly to get to. If not done correctly, you’ll make a mess at best, or strip the threads on the cartridge holder leaving the car effectively useless.

After doing this once, I started looking at other options to make this an easier process. Browsing a few forums, there is a conversion kit that allows for swapping the cartridge oil filter setup for a spin on unit. The installation is also quite simple and shouldn’t take more than hour. After unsuccessfully trying to get the parts directly from the Mazda dealer, I found the parts here. For anyone in a similar position, here’s the installation process.

First, elevate the front end of the car (unless you drive an SUV, then do whatever is easiest). I like to use ramps, just make sure you chock off the rear wheels.

Get your drain container under the oil pan and use an 8mm socket/box-end wrench to get the oil plug out.

While the oil is draining, you can observe the oil filter assembly. It’s held in place by four 10mm bolts, two on each side of the housing with an oil pressure sensor on one side.

Once the oil pan is fully drained, replace the oil drain plug and crush washer. The exact torque rating is 30 ft-lbs for the oil plug, but if you don’t have a torque wrench just tighten the plug as much as you can (being careful not to strip the threads).

Moving to the oil filter itself, use a hex tool to remove the drain plug at the bottom. This drains any remaining oil from the filter housing.

Once drained, reinstall the plug, then use an oil filter wrench to remove the cover. These last two steps are where the messes usually occur. Once loosened, any remaining oil will start draining out. Be careful to have that drain pan underneath. With the oil filter out, you’ll see the needless complexity of this part.

Now to the meat and potatoes. The green oil pressure sensor has an electrical connector attached. Use a small flathead screwdriver to disconnect the connector. In order to access the top right bolt, I had to remove the oil pressure sensor. Use an adjustable pliers set to do this. Oil may start trickling out so make sure the drain pan is in place.

Now remove the four 10mm bolts. A bracket carrying a coolant line, just above the top left bolt, had to be removed to improve access to that bolt. (This is where that 13mm socket comes in). In the images below, you can see the differences between the oil filter housings.

Use a plastic scraper to clean the surface (can’t have any contaminants in my brand spanking new assembly and oil now). After wiping it clean, start assembling the spin-on oil filter housing. There’s a specific way the gasket lines up with the housing so you can’t really screw it up. Clean the bolts with a wire brush and apply a small amount of medium strength thread locker to each one. Then start threading the bolts in one by one, tightening in a criss-cross fashion. Torque ratings are 10 ft-lbs or 120 in-lbs.

Next, place some teflon tape on the threads of the oil pressure sensor and reinstall in the oil filter housing. Reconnect the electrical connector.

Next, take your funnel and fill the engine with oil. With the oil filter in place, about 4.5 quarts should do it, but make sure the dipstick shows in the OK range. Replace the oil cap and start the car. Check for leaks underneath, around the oil drain plug and around the oil filter housing. Let the car run for a few minutes, then recheck the dipstick. Add oil as necessary to bring the level up the OK range.

Other than a rounded bolt which took a bit longer to remove, this was a pretty simple project and would’ve taken me about 45 minutes. Now I’ll say that you’re ultimately committed to changing your own oil after doing this conversion. Imagine the confused look on a tech’s face when you go to have your oil changed at a professional repair shop. Where’s the cartridge filter? It ain’t there buddy. No more messy oil changes, thank me later. Oh, and the old oil? Pour it in some empty gallon water bottles and take it to your local auto parts store for recycling.

I was supposed to upgrade the foglights with some LED units but Amazon failed me with the fitment. So that’s another project for another day. Let me know if this was helpful