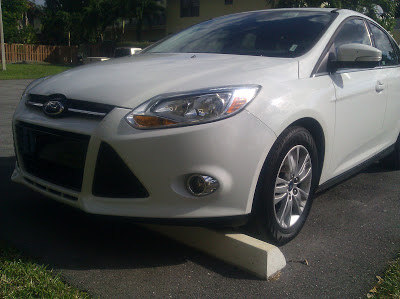 Americans are a whiny bunch.

While Europe basked in the glow of sporty, upscale and beautifully created Ford sheet metal, we in the good ol’ United States of ‘Murrkha have had to soldier on with Ford cars that were, in a word, uninspiring. After the design breakthrough that was the 2000 Ford Focus, a car that practically transformed the compact car segment at the time with fresh design, great ride/handling characteristics and a subtle upscale flair, Ford pretty much did what Detroit has been accused of doing: let its products languish with no significant freshening or redesign that captured consumers’ attention. To make matters worse, Europe had a brand new Focus in 2005 that spawned numerous performance models (ST, RS) while Americans had to deal with a facelifted version of the first generation Focus that lost the eye-catching 5 door hatch but gained a very frumpy looking 2 door coupe (losing the well regarded SVT version in the process). The Europeans laughed yet again.

Ford (or rather its new CEO, Alan Mullaly) has heard your cries and pledged that American and European models would now be aligned in both development and production under the ‘One Ford’ mantel. This basically means that the same Ford cars that Europeans get will be the same models shipped over for us here in the States, with minor alterations for safety and emissions purposes. The first product of this philosophy was the sub-compact Fiesta, which featured Ford’s distinctive ‘Kinetic’ design language. A series of trapezoidal shapes with flowing curves and dimensions, gives the little Fiesta an upscale look and inside, Ford has jacked up the quality as much as can be had in a $15k car. The next round in Ford’s salvo was the Focus and is the subject of today’s test.

The compact segment is a fiercely fought battleground between manufacturers. The Asians (particularly Honda and Toyota) have long ruled this part of the market with cars that were rock solid in quality and reliability while American counterparts did little more than provide a presence, if not competition. The recent spike in gas prices have literally forced manufacturers to react with products that provide every bit the efficiency and features that suddenly cash-strapped customers want in their vehicles. Downsizing is the new trend and Ford has capitalized on this by introducing a Focus that blows the previous (American) model out of the water in terms of styling, features, handling and quality. 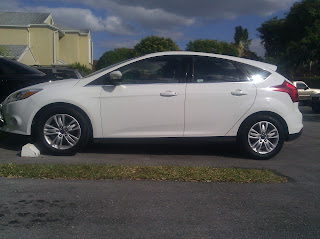 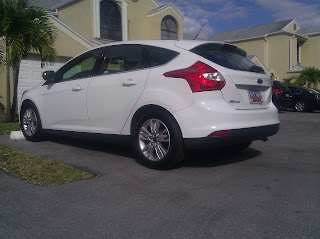 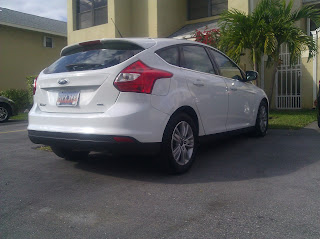 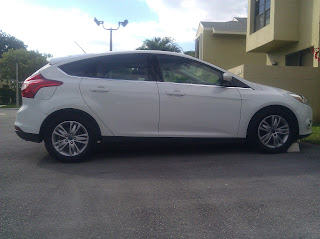 The ‘Kinetic’ design theme of the Focus is instant at first glance. While the front end may come off as a bit busy with the plastic ‘fangs’ that bisect the large trapezoidal grill, the rest of the design is quite pleasing and sporty. Here, the 5 door hatch is the more dynamic looking of the two available body styles, the sedan being the frumpier, basic version (no wonder the new ST model is based on the hatchback). This particular SEL model comes with attractive 16″ wheels, fog lamps and a hatch mounted read spoiler for a further sporting appearance. Inside, Ford has upped its game with a design that is at once futuristic and refined in appearance. The steering comes readily to hand with tilt, telescopic capability and the seats, while not powered, are easy to adjust for a comfortable position. The driver’s is faced with gauges that feature the principal tachometer and speedometer with an information screen in between both that is customizable via a 4 way controller on the left side of the steering wheel. Various aspects of the car can be called up, such as fuel economy, engine diagnostics, trip information as well as navigation prompts (when equipped as such) and audio information. 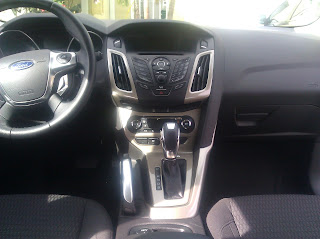 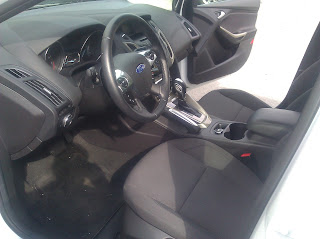 Bluetooth (both phone and streaming audio) comes with the SEL package as well as Ford’s SYNC voice control and a 6 speaker sound system. Inputs for Auxiliary and USB are provided in the center storage behind twin cupholders. The interior materials are first rate for the class, although some of the harder plastic did make its presence known in areas where hands aren’t likely to go. All in all, the cabin was quite airy and spacious, the seats were comfortable and there was good rear seat leg room, so long as the front occupants aren’t taller than 6 ft. The rear seats do fold down to expand the rear cargo area and, this being hatch, is cavernous. The center console also has a small touchscreen LCD allows control of the sound system and provide other information such as temperature and time. All Focuses (Foci?), save for the sporty ST, are equipped with a naturally aspirated 2.0L Ti-VCT direct injected inline four cylinder, rated at 160hp and 146lb-ft of torque. Power can be routed through either a 6 speed manual or, in this case, Ford’s new Powershift 6 speed, dual clutch automatic transmission to the front wheels. The suspension consists of McPherson struts up front and a multi-link ‘Control Blade’ setup at the rear, an evolution of the system that made the original focus such a hoot to drive.

Out on the road, the Focus revealed why it is often a best seller in its category. The ride/handling balance was BMW-like in that around town, the suspension did its best to soak up any surface irregularities while the dampers quelled body roll in turns. Some impact harshness did make its way through but rarely was the chassis overly upset that occupants were jostled around. Through an empty stretch of road, the 2.0L motor provided adequate acceleration while the electric power assist steering (EPAS) gave decent heft and adequate feel to the driver. Despite not having the handling package of upper Titanium models (18″ wheels, stiffer and subtly lower suspension), the SEL proved to be very playful and eager when the driver gets on it. Out on the highway, the Focus is a great long distance cruiser, the seats being supportive and the steering tracking dead straight with little need to correction. The Focus is an excellent package and a sterling value when equipped with the SEL package, marred only by one thing which, to be fair, most of the public may not notice: the transmission.

Ford’s Powershift dual dry-clutch six speed transmission is an attempt to add sophistication to the driving experience while enhancing fuel economy. It’s hard not to compare the driving experience to Volkswagen’s brilliant DSG but it’s German counterpart does a phenomenally better job at swapping cogs in both manual and auto mode. The Focus transmission suffers from too much lurching and hesitation, whether in auto or manual modes and can often be caught flat-footed when negotiating a corner and a downshift is requested to power out. To Ford’s credit, numerous software reprogramming was done as a running refit to all Focus vehicles and they’ve responded well to quelling the transmission’s inadequacies but it still has a long way to go to match VW’s DSG. I also found the rocker switch on the upper neck of the gear lever to be quite odd. Why not just add paddles on the steering wheel? Or just have a dedicated notch for the transmission stalk to slip into for the driver to do manual shifting? Like I said, most of the driving public may not notice this but around town, this was a constant nuisance to me. Slipping into Sport did wake up the transmission by holding gears longer and improving shift times a bit but it does hurt fuel economy. Naturally, the transmission is tuned to reach for the highest gear whenever possible and with EPA ratings of 26 city/37 highway, it’s hard to fault the results. But trying to up the tempo when it was time to play was frustrating. Over the time I had access to the Focus, I got so used to leaving it in Sport that when it was time to do a highway run, I noticed the engine buzzing away at over 3000 rpm at 80mph and wondered if something broke. It was only after my eyes glanced down at the instrument panel that I realized the transmission was left in Sport. Shifting it back to Drive quelled the noise noticeably and settled the car down. Out on the open highway, the Focus proves to be an able long distance cruiser, providing a ride that is noticeably firmer than a Corolla or Elantra but not overly harsh. That’s a European ride for ya. 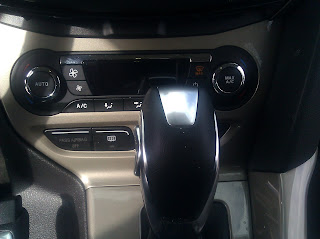 The other notable talking point in the Focus, ironically, involves SYNC. The voice control system works well enough that most commands are accepted but say a wrong command and the nice lady in the dashboard will give you a lecture in how to speak properly. And she will not. Shut. Up. That said, it’s refreshing to have hard buttons and knobs to play with such that you don’t really need to interact with her (having a front passenger to aid with adjusting climate control and radio tuning helped immensely here). To be fair, SYNC is supposed to help the driver keep his eyes on the road and it does that job well enough for simple commands like radio tuning or Bluetooth calls. When you ask nicely that is.

For 2013, the SEL trim is no longer offered, having been replaced by either optioning the base SE or going for the fully loaded Titanium model. However, the SEL makes a great buy on the used car market with an excellent equipment package. From a base hatchback 2013 Focus that goes for $19200, the SE can be optioned similarly to around $22000 (including destination). In general the Ford Focus is a solid, excellent package and a breath of fresh air for the segment. It rivals the Mazda3 in the fun-to-drive factor while giving the Volkswagen Golf, Toyota Corolla and Chevy Cruze a run for their money in terms of quality and practicality.