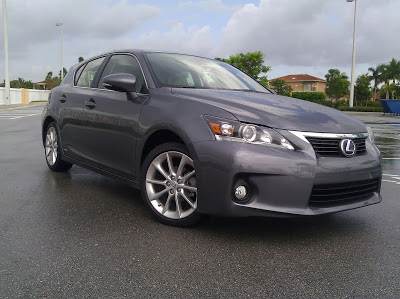 Can a hybrid really be fun to drive?

That was one of many questions I sought to answer when presented with this 2012 Lexus CT200h. It takes over from the Lexus IS250 by establishing Lexus’ beach-head in the newly formed compact luxury segment, competing against other notables like the Audi A3, BMW 1 Series and Acura ILX (as well as the upcoming Mercedes A Class). Where Lexus’ other entry hybrid, the HS250h was a sales flop, the CT200h remixes the formula by using the sporty hatchback form while injecting a very serious dose of suspension tuning. Is this enough to take the fight to its competitors? 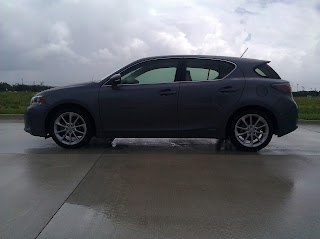 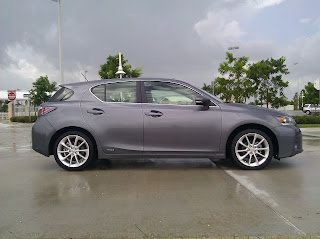 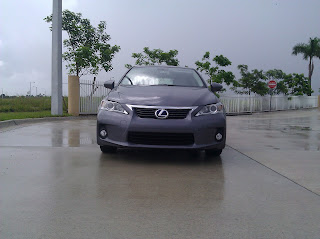 Based loosely on the MC platform that forms the basis for such Toyota models as the Scion tC, Corolla and the aforementioned HS250h, the CT goes for a more upscale and dynamic look. It bears a passing resemblance in profile to a Mazda3 (which is no faint praise, the 3 being one of the sportier offerings in its class). The front end is aggressively styled and the headlights feature LED accents on the lower area that give the car a suitably wide and sporty stance when looking head on. The front overhang is long (befitting the FWD platform) but the rear overhang is short, giving the CT good proportions. Seventeen inch alloys fill the wheel wells nicely and the rear end completes the styling element with a subtle spoiler off the end of the hatchback. The design breaks no new ground, but looks surprisingly premium and whole once you stand back to admire it. 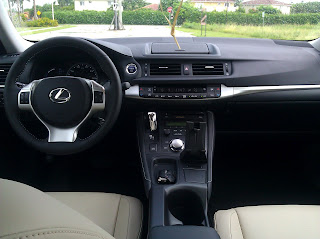 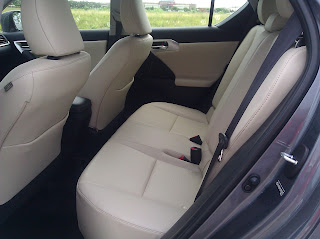 Inside, the CT200h features high quality NuLuxe (environmentally friendly) leather seating front and back with great, high end materials and tight fitting seams everywhere, befitting for a Lexus product. The bamboo wood trimmed accents look the part and weren’t flimsy to the touch. It should be noted that, in a nod to the environment, Lexus has built the CT200h to be 90% recyclable. In lieu of a navigation system on base models, Lexus provides an odd “device holder” on the center console, presumably to hold a phone/storage device or an aftermarket navigation system. It looks like an afterthought, but otherwise the cabin exuded that excellent Lexus quality. Controls for the sound system were logically laid out and easy to use, including those for the climate control (that device holder did get in the way a few times however). The adjustable heated front seats offered good support, leg room was great and I got the feeling of being enclosed in a cockpit, the low seating position adding to the environment. The rear seat room is tight for anyone above say 5’10” (test: I placed the front seat in my comfortable position and sat “behind myself” in the rear…yup, pretty tight) and I wouldn’t want to be stuck back there for extended drives, let alone with two other people. Cargo room is also decent and would be larger were it not for the battery cells that make up the hybrid system lurking just behind and below the rear seats.

For those not in the know, a short explanation regarding the CT200h’s powertrain. Essentially an identical twin of the Toyota Prius, the CT200h’s hybrid system is a power split variant consisting of a conventional 1.8L four cylinder gasoline engine tuned to run on the Atkinson’s cycle (leaner burning) which produces 98hp and 105 lb-ft of torque, an 80hp/151 lb-ft electric motor paired with the gas engine via a planetary gearset and a 27kW/36hp Ni-MH battery pack consisting of 168 cells. Combined, the powertrain puts out 134hp. A drive-by-wire computer controls the system and allows the CT200h to run in either EV (full electric) mode, power mode where both the electric and gas motors provide power or direct gas drive where the gas motor provides the sole motivation. Power is routed to the front wheels via a continuously variable transmission (CVT). The battery pack recharges itself by use of regenerative braking which captures the kinetic energy usually lost in heat and directs it to the batteries. The gas motor also assists in this function if the batteries get too depleted. A configurable display on the driver gauge cluster shows the system components in real time and shows the driver various functions such as battery state of charge, where propulsion is coming from: gas, battery or both. The electronic transmission also offers a ‘B’ mode for aggressive regenerative braking for downhill maneuvers.

The CT200h is billed as a sporty* car to drive (notice the asterisk?). The Lexus Drive Mode Select system offers three different modes via a rotary knob in the middle of the center console: Eco, Normal and Sport. Each affects all the driving bits of the CT, from the suspension’s sophisticated lateral dampers, to the steering and the drivetrain. Eco mode is obviously the more conservative of the three. Here, throttle engagement is lethargic, the steering goes fingertip light and the powertrain’s start/stop function engages, shutting of the engine at traffic lights when the car comes to a complete stop. Unlike earlier start/stop systems, the CT200h was barely noticeable: an extremely faint pulsing felt through the seats whenever the engine fired up after accelerating away from a stop. A display in the driver’s gauge cluster shows once Eco mode is selected and allows the driver to see how efficiently (or inefficiently) your driving is. Treat it like a game and it becomes quite enjoyable to eke out the best mileage possible, at the expense of everyone else behind you of course. The CT200h is also capable of being locked in EV mode by a button next to the Drive Mode Select knob and allows electric-only propulsion for a mile at speeds of up to 28mph, at which point the gas engine comes alive to assist. Pretend there’s an egg between your foot and the gas pedal and you get why I’d recommend only using this function in parking lots or garages as it is pretty much useless on public roads. I tried it a few times around the livelier parts of my neighborhood and not once could I avoid being honked or beeped at by angry drivers behind me.You’ve been warned.

If Eco mode is way too agonizing, Sport mode livens things up a bit. Selecting this mode changes the Eco display to a red accented rev counter, steering effort increases and both electric and gas motors combine to give the driver full power. It would be nice if Lexus had programmed “shift points” in the CVT’s operation to make its constant buzzing in this mode easier to live with. It would also be nice if I had some shift paddles to work with but this is pretty much nitpicking. With the combined 134hp at my disposal, acceleration was just a bit less tepid and, by my butt-o-meter, just a few ticks over 9 seconds was needed to reach 60 mph. Not a screamer in terms of acceleration in any sense but once speed is achieved, the fun begins in maintaining the momentum. Around town, the CT200h was quite comfortable, soaking up bumps and provided a somewhat firm but compliant ride. Understand though, the CT200h isn’t a driver’s car and isn’t meant to be driven at more than say, six tenths as the limits are low and easily reached. Besides, the various active stability control systems won’t let you anywhere near them anyway. That said, it is way more engaging to drive than the dowdy Prius.

On my testing loop, the CT200h responded in a more dynamic fashion than the Prius (or even the HS250h) could ever hope to do. Credit the sophisticated independent rear suspension bits and the lateral dampers. Stability was excellent and the sophisticated dampers did their thing, stifling body roll and keeping the car composed. Don’t be fooled into thinking these 17 inch tires are grippy: they’re of the hard, low rolling resistance type and as a result they squeal earlier than normal tires. Still, hustling the CT at a decent clip was okay and preserving speed around the course was not an overly bad exercise. Steering was responsive if vague off center and provided little information about the level of grip available. Braking action was also quite good, though at low speeds their regenerative nature was odd, feeling less progressive and more “on/off” in nature. Give this car a proper engine and a manual transmission and it would be a great little road carver as the suspension is that good. However, one must remember the CT200h’s mission in life and as such, in the end any sporting notions ultimately take a back seat to efficiency. 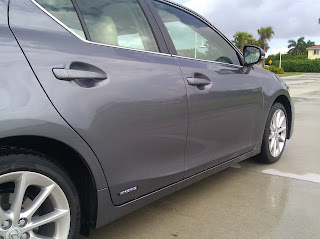 My tester was a base model that starts at $29,120 (excluding destination) and came well equipped with such standard features as leather interior, sunroof, dual zone climate control, AUX/USB inputs for the powerful 6 speaker stereo system, satellite radio, Bluetooth and two 120v power outlets. The CT200h also comes comprehensively equipped with outstanding safety features like traction and stability control, electronic brake force distribution and a full compliment of front, side, rear and knee airbags throughout the interior. The Premium model begins at $31,170 and features a more powerful 10 speaker sound system and an optional navigation system which includes NavTraffic and NavWeather functions and the Lexus EnForm multimedia system. An F Sport package can also be added that includes different style 17 inch wheels, a more aggressive front fascia and sportier finishes for the interior. Fully loaded, CT200h can easily approach the $40k mark. 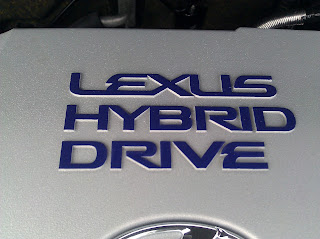 So back to the question: can a hybrid really be fun to drive? If you’re the sort of person that enjoys hugging trees, making your own fuel and singing “kumbaya” lullabies to your kids then you’ll be much more satisfied with a Prius. If however, you want a car that is more luxurious, less dorky than the Prius and a bit more engaging to drive while still giving a nod to Greenpeace at an affordable, entry lux price then Lexus may have the car for you in the CT200h. In efficiency, it easily trumps its competitors with EPA ratings of 43 mpg in the city, while matching the next best Audi A3 TDi’s 40 mpg highway rating. At a combined rating of 42 mpg, the CT200h is quite literally tops in efficiency and comes close to matching the A3 dynamically, if not in outright speed. Does the CT200h live up to the sporty intent that Lexus designed it for? Not chance. The CT200h is a compromise. There’s nothing sporty about a CVT (c’mon, no shift paddles?), the brakes, while effective are touchy, the electric steering has no feel and is arcade-like in its actions and I can imagine some scary moments passing slower traffic on a two lane road when flooring the throttle and getting more engine noise rather than increased speed. That said, around town the CT200h is comfortable, efficient and Lexus-luxurious. For an entry level luxury car, it effectively handles its duties. But drivers wishing for a real sporty hybrid will have to look elsewhere. 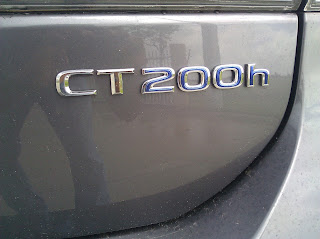 Special thanks to the Penagos Foundation for providing the tester. You rock!