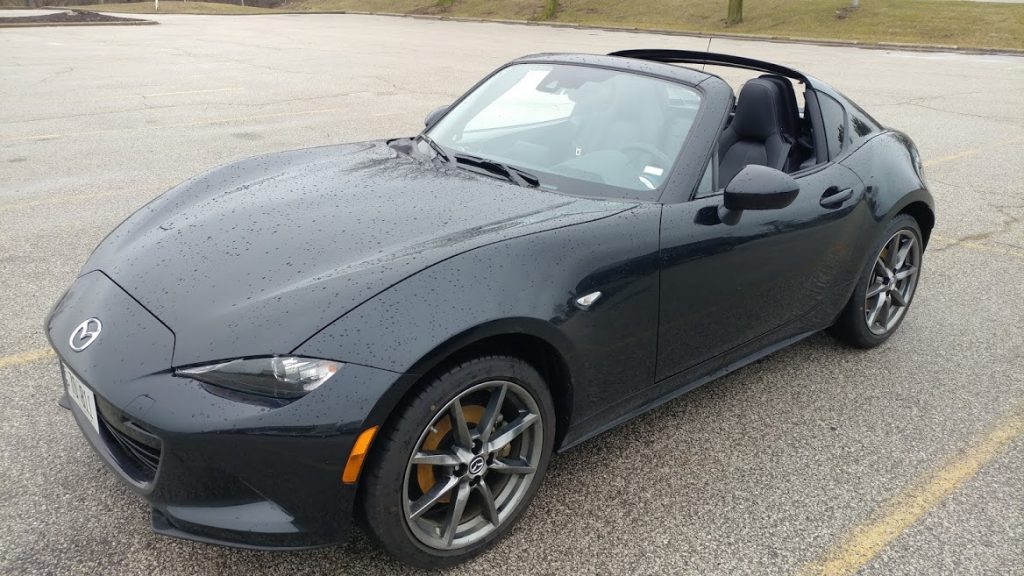 What we have here folks is proof positive that you don’t need Hellcat-levels of horsepower to have a proper sports car. Could it use more? Sure, but is it necessary? Not when the car in question is so well designed with the singular purpose of lightness and balanced handling. These have been the hallmark of the Mazda MX-5 Miata roadster ever since its introduction way back in 1989. Over the generations, Mazda has stubbornly adhered to the design ethos for the Miata: minimalist, lightness, simplicity and balance. In these times, where it seems cars are getting larger and heavier with ever increasing safety standards, the Miata has mostly bucked this trend. With this, the fourth generation (code name ND), it has never been more focused.

My tester was a 2020 MX-5 Miata RF (short for Retractable Fastback) Grand Touring finished in sinister Jet Black Mica paint and equipped (to my initial dismay) with Mazda’s SkyActiv 6-speed automatic transmission. Basically fully loaded, the only other optional equipment fitted was a cargo net to the ridiculously small trunk for an as-tested price of just under $37k. The RF in the designation means this particular Miata roadster forgoes the manual folding soft top in favor of a powered retractable targa panel. To my eyes, this gives the little Miata a much sleeker look and truly makes it a four season car. This was good considering at the time of testing, winter was in full swing and I wasn’t sure how my Jamaican blood would fare driving a convertible around for a week.

It’s a tough job this.

My initial reactions were good. The cabin is cozy and intimate, the controls fall readily to hand and are very intuitive to use (except for the infotainment, more on that later). The seats, finished in black leather, were comfortable and supportive but around the cabin, interior storage was in pretty short supply. Also, I wrongfully thought how could a car in this day and age lack cupholders? Then I noticed they were behind my right elbow, which, weirdly enough, was where the glovebox containing the owner’s manual was located. Very odd placement, I wondered, until I figured out that they are detachable. There’s a point on the transmission tunnel either side of and just below the transmission lever where these…things can be attached in order to hold your can of pop. Hey, at least Mazda gives you something. Material quality is excellent and the controls felt top notch. One thing I noticed and fell in love with: the knobs that control the volume, infotainment and climate control systems have a knurled aluminium surround that felt expensive to touch and weighted in operation. Luxury cars costing literal thousands more can learn a thing or two from Mazda’s attention to detail here.

The exterior is just as striking, Mazda’s Kodo design suits the Miata’s proportions quite well. The headlight design integrates neatly with the front end, making the little car look mean, although the grill slightly hearkens back to the goofy smiley-faced grills of the past design. The fastback look of the powered top adds to the Miata’s sleekness and well proportioned rear end. The tailpipes could’ve used a bit of brightening (chrome finishers maybe?) but this was mostly nitpicking on my part. The 3/4 profile gives the Miata a small, yet focused and playful look. I can dig it.

Underway, the Miata’s lightness adds to the sprightly driving experience. A 2.0-liter 181-hp four cylinder provides motivation and at first glance, doesn’t seem like much until you remember how light this car is. Weighing in around 2400 lbs, this ND generation is even lighter than its predecessor. Mash the go pedal from a standstill and you’ll reach 60 mph in just over six seconds, the 6-speed automatic quickly snapping away shifts with precision. Straight-line speed however isn’t the Miata’s forte. No, what makes Mazda’s roadster such a smile inducing machine is its ability to devour corners. Chucking the MX-5 into a long off ramp, I was surprised at how much speed I was carrying. The nose tucks in and hangs on, almost daring you to give it more gas in order to rotate the rear end.

Doing this however, one thing caught me by surprise: how much weight transfer I felt as the car transitioned right-to-left. It’s not a heaving sensation, mind you, as the car still settled and gripped the road. But there was a bit of squirming in the suspension just as I threw the steering wheel off center. This didn’t take away from the driving experience however, as the way the Miata responds to your inputs is uncanny. Steering is light and ultra responsive without being twitchy. While the 2.0-liter may not have Honda-levels of refinement, the engine loves to rev. I can’t say I didn’t miss having a manual but the automatic does a pretty good job of anticipating gearshifts so you’re always in the right gear at the right time.

While the Miata loves a curvy road, it’s not a bad daily commuter. You’ll feel every expansion joint and rut on the highway, plus tramlining is a thing. Would I take it on a long highway trip? Probably not, unless of course the roads were glass-smooth. Trunk space is ridiculously tiny and even if you planned a road trip with your significant other, don’t expect anything short of small duffle bags to fit. But even on my short trips, I was smiling. It also helped that my Grand Touring model was well equipped: a 7″ touchscreen with the Mazda Connect infotainment system, lane departure warning and keeping assist, blind spot monitoring, Bluetooth, Apple Carplay and Android Auto integrations, Smart City Brake control (stops the car if an accident is imminent), 9 speaker Bose audio system, keyless entry, Mazda navigation with traffic sign recognition among others. Now about that infotainment system: it needs a refresh. I applaud Mazda’s use of a central rotary knob to control the system as well as allowing use of a touchscreen. That said, the system itself is junky and requires a bit of a learning curve to use. Yes, there are back and home buttons to simplify things, but the menus are ill-placed and require too many pushes and twists of the knob to get to. Hopefully, the next redesign/refresh will get the new system already in use the new Mazda 3 and CX-30. This however, is a small nitpick. Once the week was over, it was mostly a no brainer.

The Miata is one those few cars that have never strayed very far from its roots. Mazda’s goal of Jinba ittai – “oneness of horse and rider” was baked into every generation of MX-5. That this ND generation is just as small and light as the first speaks volumes to Mazda’s laser focus and attention to detail when redesigning the MX-5. Every time I got in the car and started it up, I smiled. Every time I got out, I smiled. Even that day I had to use that blue brush thingy to remove ice from the windshield and rear glass after heavy snow dumped a foot of the stuff, I smiled. I had a goofy grin on my face because I knew I was going to get another go in one of the most iconic sports cars on the market today.