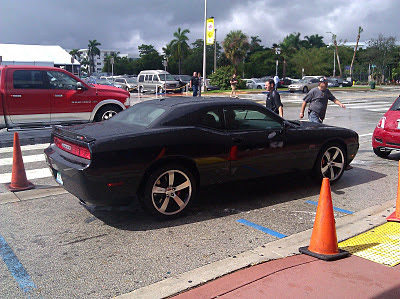 You can hear it from down the street. I’m talking about the 6.4 liter beast of a HEMI engine as the vehicle comes into view. A subtle, yet guttural growl that announces its presence in a way that takes you back to the golden age of muscle cars (yes, yes, I wasn’t born in time to partake of that era but I’ve watched enough videos and been around enough vintage cars to know that sound). The car in question is the 2011 Dodge Challenger SRT8 392 (392 for the engine size in cubic inches if you’re from that era) and it sounds mean. Dodge’s modern take on the muscle car has been around since 2006 when it debuted in concept form at the North American International Auto Show to much acclaim from the public. Despite being modernized, it was obvious that the Challenger took its design cues from its 1960s predecessor. Based on a shortened version of Chrysler’s LX platform (Chrysler 300 and Dodge Charger/Magnum) the Challenger has low and mean look to it, that definitely exudes presence and aggression, something the Chevy Camaro and Ford Mustang lack. 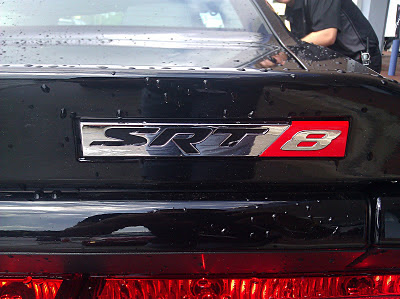 My test vehicle was a Challenger SRT8 equipped with the aforementioned 6.4 HEMI V8, putting out 470hp and 470 lb-ft of torque through the rear wheels via a 5 speed automatic with a manual shift mode. The 6.4 is a revamped version of the 6.1 liter that debuted in the original 2008 SRT8 version with 45 more horses and with the addition of Chrysler’s cylinder deactivation system in an effort to enhance fuel economy. The pre-2011 models had an interior directly transplanted from their 4 door brethren i.e. cheap, thin and plastic looking surfaces that were as dull to look at as they were atrocious to touch. Now under Fiat ownership, Chrysler has done a substantial redesign of the Challenger’s interior, opting for high quality materials, a new three spoke steering wheel (a vast improvement over the previous truck-like version) and soft touch surfaces. The suspension also had a thorough revision, lowered with stiffer springs, dampers and a change in wheel camber to enhance stability and improve cornering. Despite all this, the Challenger is a heavy vehicle weighing north of 4100lbs and as such, doesn’t change direction as eagerly as the smaller Mustang. 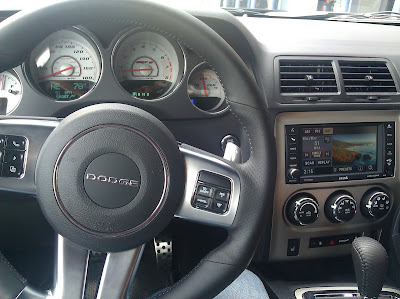 Settling into the comfortable, leather clad driver seat, I felt at once enclosed and at one with the car. The cockpit is roomy but still had an enveloped feeling to it. The ground was still wet with the recent rain and the route (see previous Dodge Durango review) was not conducive to any sort of high speed hijinks or handling tests. Despite it’s firmed up suspension, the SRT8 still had enough give to absorb the rough edges as we motored around the streets of Miami Beach. Turning onto a long straight, which was unusually devoid of traffic, my Dodge rep flicked the transmission into Sport, engaged first gear and uttered two of the loveliest words one can hear when driving this sort of car: “Floor it”. 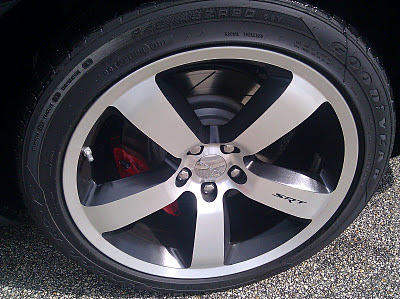 What resulted was a melodious few seconds of V8 roar, the rear wheels instantly breaking traction and the rear end stepping out slightly but not to the extent that I couldn’t catch it. Traction control quickly intervened, hooking up the rear tires and the Challenger simply bolted to the next traffic light with a speed and ferocity perfectly suited to this kind of car. The brakes, large dinner plate sized Brembos, were firm and powerful, bringing everything to a halt at the next traffic light. I looked in the rear view mirror to see both my father and nephew grinning wildly. The Dodge rep smiled and said, “That my friend is what this car is all about.”

Short as it was, driving the Challenger SRT8 is an aural as well as visual treat. The HEMI constantly reminds of its presence but not to the point of annoyance and exterior look of car drew attention whichever way we turned. The SRT8 version isn’t cheap by any means: with a base price of $43780 it hunts in the same class as the smaller and more powerful 550hp Mustang GT500 as well as the upcoming 580hp Chevy Camaro ZL1. However, if you just want the looks (and don’t mind the smaller fuel bill…who doesn’t want that?) a base Challenger with Chrysler’s much improved 305hp 3.6 Pentastar V6 can be had for a base of $24895. If you just gotta have a V8, then the R/T version with the “base” 390hp 5.7 HEMI stickers for $29895.

Dodge has done an outstanding job with the Challenger, imbuing it with classic muscle car styling and the engine power (and sound) that will give any driver a taste of what it was like to live life a 1/4 mile at a time. 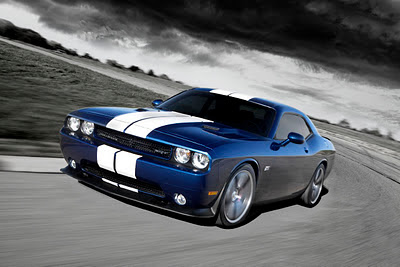