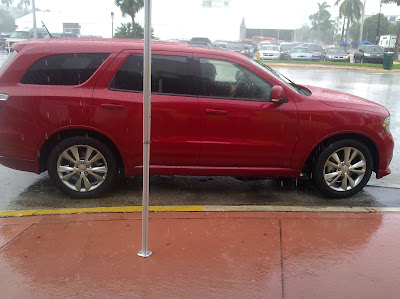 Chrysler has been through a lot in the last few years. Having been owned by Daimler-Mercedes, then Cerberus Capital Management and finally passing from US government ownership to the hands of the Fiat Group, the American automaker has faced numerous challenges to its product portfolio and overall profitability. Within the last year, Chrysler has either introduced new products or entirely revamped existing models to the point where they are either class leading or competitive within their respective segments. A notable model that has been completely redesigned is the 2011 Dodge Durango. Unlike its truck based predecessor, the 2011 Durango is leaner, sleeker and far meaner in exterior design. Based on a stretched version of the new Jeep Grand Cherokee’s rigid unibody platform (which itself originates from the Mercedes ML crossover), the new Durango offers a more civilized car like ride and better fuel economy while still offering the interior volume and towing ability one expects of a vehicle its size.

On the exterior front, the new Durango expresses the Dodge design with an aggressive front end with the signature cross-hair grille front and center, accented by twin element headlamps and a stance that’s lower than its Jeep stablemate, emphasizing its road-biased role. The shape exudes sleekness by looking long and low with blacked out B pillars, the rear end is capped off by upturned tail lights and twin chrome exhaust outlets on V8 models (single pipes for V6 models). Equipped with painted 20″ wheels, the Durango looks aggressive and sporty for its size (especially with the Inferno Red paint of my tester).

Inside, the Durango offers an upscale look and ample space in its seven-passenger, three-row configuration. Chrysler has been panned in recent years for the cheap, tinny and plasticky interiors it fitted to older models. Wanting to substantially improve its image, Dodge designers set out to break this cycle and surpass even their own expectations. While posing no threat to luxury marques like Audi and BMW, the 2011 Durango’s interior is sumptuous and luxurious for its price point. Rich looking materials are lavished on every surface and soft touch plastics are used where ever you’re likely to lay a finger. The designers also did an admirable job with the console, dashboard and control surfaces. The controls were logically placed, the gauges were clear, easily read with an information screen placed between the tachometer and speedometer so the driver can easily access menus such as fuel economy, range, radio station presets as well as GPS waypoints (when equipped). The optional navigation system, however, might be a letdown to some tech folks. While offering good graphics and a nice touchscreen that also handles sound system and Bluetooth functions, the overall feel isn’t as good as the newer, larger units in the Durango’s smaller brother, the Dodge Journey, Illuminated cup holders are a neat trick as well as a button that instantly folds the headrests on the third row seats, making rear visibility easier when backing up (a rear view camera is available). 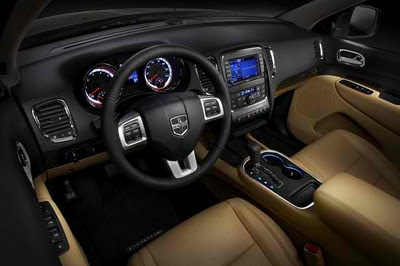 Dodge also made sure that the cavernous interior was easy to configure. All seats fold flat (include the front passenger seat) enabling for that midnight run to Walmart or that last minute drive to Home Depot (for hurricane season and such). That third row is adult sized for short trips but your 6 foot passengers will conspire against you if they’re stuck for long road trips. Better sized for kids as my 12 year old nephew was very comfortable back there. He also found access past the second row to be simple and straightforward: one touch action tumbles the second row seats out of the way.

Equipped with the 5.7 liter HEMI V8, which offers 360hp routed by a 5 speed automatic to all four wheels, the 2011 Durango offers the power to match its aggressive looks. Despite being a V8, the HEMI offers cylinder deactivation: a system where four of the eight cylinders are deactivated under light throttle loads, providing better fuel economy. Equipped with AWD however, the Durango gives fuel economy ratings of 13 city, 20 highway. An additional city mpg is gained if you don’t need AWD, or better yet, if don’t need V8 power, base models of the Durango come equipped with Chrysler’s new 290hp 3.6 liter Pentastar V6. Peak torque is 260lb-ft, and fuel economy figures stand at 16 city, 23 highway in RWD guise and losing a highway mpg when equipped with AWD. 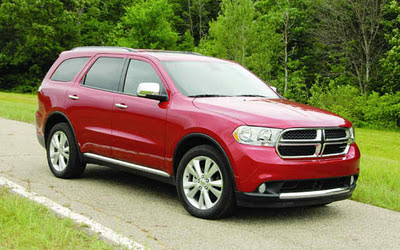 Power from the HEMI was plentiful and easily brought the 5200lb vehicle up to speed along Miami Beach’s streets. The hydraulic steering (as opposed to the electro-hydraulic setup that’s filtering through many new vehicles today) is quick and offers great feedback for a vehicle of this size. Though I wasn’t able to get very frisky with the Durango (it was rainy and Miami Beach streets aren’t conducive to getting frisky with such a large vehicle) the ride was supple and the all independent suspension offered a secure and planted feeling that the old model could never match. Shifts from the 5 speed automatic, while reasonable in traffic, offered slow kickdowns, harsh upshifts and was almost non responsive to manual commands from the console shifter (an 8 speed automatic is on the way). The cabin was quiet and vault-like (the kind of feeling you usually get from Mercedes vehicles) with the only sounds coming from the HEMI when excessively prodded (a subtle growl under acceleration). Despite being the power guy that I am, I wouldn’t be opposed to purchasing the V6 model as power, while not as plentiful as the HEMI, is still enough for everyday needs (especially if you value fuel economy).

All in all, the 2011 Dodge Durango is great vehicle, a substantial improvement over the previous truck based model. It has better materials than the Chevy Traverse, more spacious than the Honda Pilot, is as fun to drive as the Mazda CX-9 and is a more efficient package than the Ford Explorer while offering the only V8 option in the segment (and with that the highest towing capacity). Equip it with the sharper touchscreen interface from the Dodge Journey and upcoming 8 speed transmission and the Durango will be hard to beat.