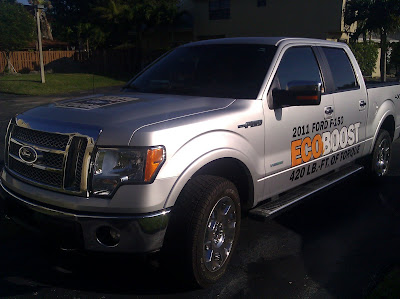 Finally, I get to do my own personal review of the 2011 Ford F-150 EcoBoost. After letting David Mullings have all the fun, it was officially my turn. Dare I say I had the better experience? Quite possibly. Away from the crowds, having the truck to myself and a dedicated Ford representative to answer my questions really shows that Ford stands behind their products. Getting an invite like this was really surprising at first, but enough about that. Time to review! 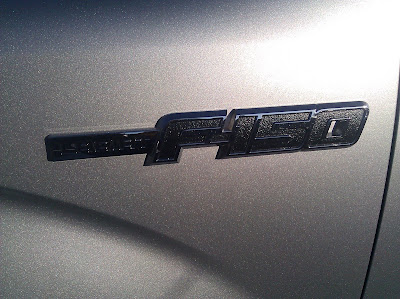 What showed up at my residence was a 2011 F-150 Supercrew Lariat (base price $37,520 with the EcoBoost V6) with a boatload of options that took the sticker to about $43,000. Loaded with navigation, leather seats, wood grain finish (plasticky looking), a Sony stereo system, a rear view camera and a moonroof, this certainly wasn’t a base truck. Before heading out to drive, I explained to Walter (my representative for this drive) my initial reservations regarding the long term durability of such an exotic engine being dropped into a pickup (see previous post as well as for technical specs). At first glance, this engine could be a clone of the same 3.5 twin turbo V6 that currently resides in top level versions of the Taurus, Flex and Lincoln MKS, except beefed up for truck duty. But this perception would be wrong. According to Walter, the units for Ford’s passenger cars develop between 350-365hp and 350lb-ft of torque while the F-150’s engine produces 365hp and 420lb-ft of torque. The EcoBoost program for the F-150 stemmed from Ford originally wanting to introduce a diesel into the light duty truck segment for increased fuel economy. The thinking was that diesel, at the time, was more or less stable in price and consumers were ready to embrace the technology. However, the downturn of the economy in 2008 led to the cancellation of a diesel program for the F-150 (it must be said that General Motors had a similar program for its light duty trucks but it too, fell victim to massive cutbacks). 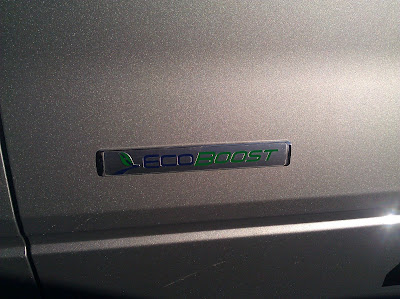 So that’s what led to this drive on this pretty nice day. A short hop into the cabin reveals splendid materials, fine leather and good support from the driver’s seat. Close your eyes for a while and you’d swear you were in a $50k car (and not a truck). Engaging the 6 speed automatic transmission in drive and away we went. No sooner had I turned out the complex than the words “Floor it” rang in my ears. Didn’t have to tell me twice. From a slow 30mph cruise in 6th gear, the transmission quickly kicked down 3 gears into the meat of the powerband ((1700 and 5000 rpm) and 400lb-ft of torque slammed us into our seats, the faint whistle of the twin turbochargers announcing their work. The F-150 certainly isn’t wanting for more power with this motor. Knowing where to avoid traffic, I eased onto an arrow straight road heading west and kicked the truck up to a steady 65mph speed. The ride was solid, yet comfy. You’re aware you’re in a truck, but the ride is plenty smooth and not overly bouncy. The electrically assisted steering was quick and knew when to give assist and when to back off. Amazingly for a 6,000 lb truck, communication from the front tires through the steering was exemplary. Ford is one of the manufacturers that have figured how to precisely tune electrically assisted steering systems but to find such a well tuned unit in a truck is refreshing. 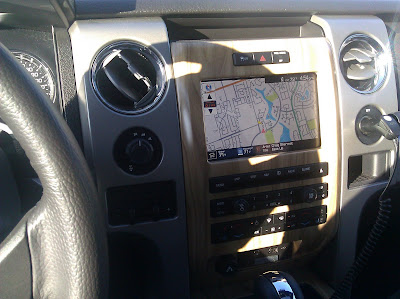 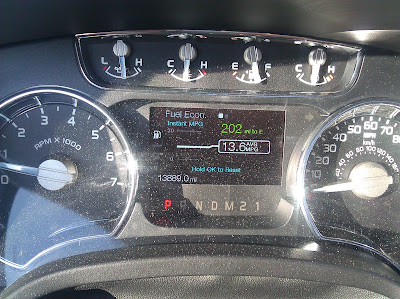 The automatic transmission also has a manual mode, activated by slipping the lever into M and manipulating the gears via a +/- rocker switch located on the lever itself. This is useful for towing where engine braking is a necessity. The transmission also aids in fuel economy and according to the average readout, available via an LCD screen located in the driver’s instrument cluster between the speed and RPM gauges, read at 13.8 mpg. This wouldn’t be so bad at first, but then Walter noted that this very truck had been through a hard morning of standing start acceleration tests, towing demonstrations as well as customer test drives, and it shows in the fuel economy readout. The EcoBoost F-150 is rated at a very impressive 16/22 city/highway mpg and in mixed driving one can easily average 18 mpg. For a truck with this much power on tap, this is very impressive as the numbers either match or beat rivals’ base V6 options.

Most truckers might miss the steady rumble of a V8 under the hood (the V6 does sound powerful but the turbos give it away) but I believe this powerplant will sell quite well. Durability tests have proven the engine is capable of handling the kinds of abuse trucks are normally dished out and to return such great fuel economy numbers is an added bonus. I should also put here that though this is a turbocharged V6, it loses no ground to the established V8s as the F-150 is rated to tow 11,300lbs, a hefty number for the segment. Ford has really energized its truck with this engine and it stands to see how rivals General Motors, Ram trucks (previously Dodge) and Toyota will respond. 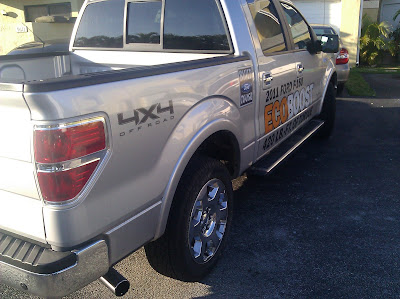