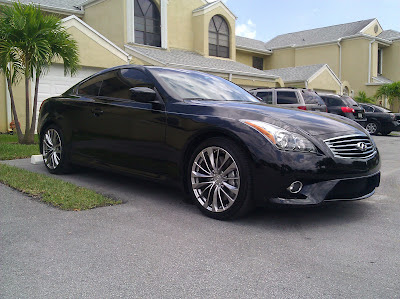 For every champion, there will always be contenders who vie for the chance to knock them off the pedestal. Since the beginning of time, the vaunted champion in both sales and performance in the entry-level luxury category has been the BMW 3 Series. No one has been perfectly capable of matching the Munich magic that BMW engineers somehow managed to infuse into the RWD 3 Series spot-on balance or comfortable cruising and outright performance when the road turns curvy. Oh sure, there have been many pretenders to the crown with new ones popping up seemingly everyday (the new Cadillac ATS is the latest to take a shot) but arguably, no-one has come closer than Nissan’s luxury division, Infiniti. When it introduced its G sedan at the beginning of this century, here was a car that at the time, almost matched the BMW’s level of refinement, luxury and handling, while coming in at a lower price. Since then, the 3 Series has undergone two redesigns with the latest F30 model introduced in early 2012 and the coupe version (perhaps being rechristened the 4 Series) coming next year. Infiniti will also have a new G sedan and coupe debuting next year but for now, we have the G37 Coupe which was introduced in 2008 to take on the then-new E90 3 Series. Did it hit the mark? Does it still have what it takes to give the new 3 Series a bloody nose?

Not often does one walk up to a car and think, “this will be a good drive.” The G37’s styling surely makes that impression. Its flowing lines and hunkered down stance has presence, like a predator just before the pounce. It’s a classically proportioned RWD coupe, short rear deck, wide stance and long hood.While the first G35 Coupe was a well-styled car in itself with straightforward lines and simple elegance, the G37 puffs them out a bit. Like adding sinewy muscle to a basic shape. It’s a curvaceous styling treatment that has aged well four years on. Up front, the Infiniti grille sits prominently, flanked by stylized headlamp clusters with standard Xenon lights and engine cooling ducts below. The wheelbase is long for a coupe, bookended by sharp-looking 19″ wheels. Out back, large twin exhaust tips peek out from under the valance and announce the presence of Infiniti’s corporate VQ Series 3.7 V6 under the sloping hood with pronounced authority. A stroked version of the previous model’s 3.5, this iteration now stomps out 330hp (up 40hp) and  270lb-ft of torque. In this particular G37, that power is routed through a 7 speed automatic with sequential shifting via either the shifter or twin paddles on the steering wheel. Inside, are well bolstered, multi-adjustable leather seats with memory functions that are as comfortable as they are supportive. The cabin is laid out with soft touch surfaces all around and are of higher quality than the previous G35, which was routinely panned for its questionable build quality. Our model was fitted with an excellent navigation, Bluetooth, AUX connectivity, steering wheel controls and a powerful Bose audio system. The navigation system was easy to use and the center console is logically laid so finding the right button or knob was pretty easy.

But we’re here to drive right? And drive I did. With the highly acclaimed FM platform as its starting point (the same basic chassis underpinning the stupid-quick GT-R), improvements were made to quell issues like noise and NVH. Widened, stiffened and lower, the G37 presented a compliant and docile ride around town, the automatic slushbox slurring through gears and going about its business unnoticed. Most cars with ‘S’ or ‘Sport’ in their names tend to have firm suspension tuning that without proper calibration, yields a harsh ride, but the G37 slips by this notion with a very good ride/handling balance. You know it has sporty pretensions but it doesn’t pull at the leash (so to speak) like its kissing cousin, the 370Z. The dampers felt well tuned to filter out most of road irregularities without jostling the vehicle’s occupants. Ambling around the neighborhood I initially feared the constant droning of the exhaust from such large pipes (the 370Z is guilty of this) but the cabin was well insulated and kept any of the burly V6’s noises at bay while cruising around at less than posted speed limits. Turning on to one of the few straight and lightly traveled roads in the area I slipped the transmission to S and floored the gas. A slight chirp could be heard from the rear wheels as the motor cleared its throat and launched from a standstill with authority. The automatic quickly ripped off redline upshifts and the exhaust, quiet and distant moments ago, sang the distinct throaty howl of a big bore Nissan VQ motor in anger. By my butt-o-meter, I just had a front row seat to 0-60 in a tick over 5 seconds (or less) which, again by my estimates, makes a 14 second quarter mile time believable. Paddle shifters were great at hand, though the time between flipping a paddle and the transmission kicking up (or down) a gear was slightly irksome in its delay. It’s not a dual clutch automatic but how often will you be using the paddles anyway?

The few roads that were curvy in nature along my test route provided just enough of a challenge to probe the G37’s limits. On an impromptu skid pad, the G37 stayed neutral to a surprising degree, almost allowing throttle induced steering…at which point I had to back off since, as lightly traveled as they were, these were public roads. I had no doubt that getting sideways could easily be achieved should one choose to do so. I also had no doubt that an easily controllable slide is very possible as the G37 allows the driver to ease up to the limits and provides ample warning once those limits are reached. In many ways, this Infiniti might be an easier car to drive at the limits than the 370Z, which requires more skill to get the most out of than a mere mortal like myself can allude to having.

Then again, the G37 isn’t that sort of car. Sure it maintains the sportiness of a 370Z but adds a usable layer of luxury and comfort to the equation. This being a 2+2 coupe, rear seat real estate is nothing to write home about compared to a sedan but it’s manageable for short trips. I was able to ‘sit behind myself’ with the front seat set for my dimensions. The rear seats also fold down to expand what little space the very shallow trunk provides. Let’s face it, you don’t buy this car for practical reasons like trunk space anyway. Need more cabin space? Infiniti will gladly sell you a G37 sedan.

Current G37 Coupe pricing begins at $39800 for a base Journey model. Add $3250 to get the Premium package that includes such niceties as a moonroof, rear sonar parking system, power tilt/telescoping steering wheel (why isn’t this standard?) and the upgraded Bose audio system. A further $1850 includes the navigation package that brings Infiniti’s easy to use navigation system with services like NavTraffic, NavWeather, Zagat Survery Restaurant guide, rear view camera and voice recognition. Including destination, this particular G37S stickered for an as-tested price of $47,745. Think about it. A similarly equipped BMW 335i Coupe can sticker for nearly $10,000 more. 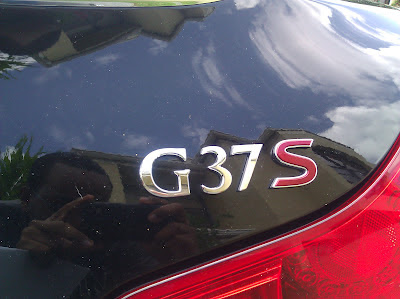 Four years on, the Infiniti G37S Coupe still makes a compelling case for itself when compared to its Bavarian rival. A high power motor, similar ride/handling balance, an impressive amount of luxury and slick styling all at a relative bargain. What’s not to like?

Many thanks to guest blogger Robert Mullings for providing the test vehicle for this review. Check out his other reviews here as well as his official website.