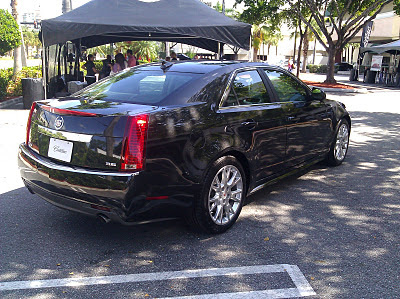 Cadillac has been on a roll lately. Chances are if you asked your grandfather what a Cadillac means to him, he would describe something along the lines of pink colors and huge fins (and a plush ride to boot). Show him a picture of the car above telling him that THIS is a Cadillac and he’d likely yell sacrilege.

Indeed folks, the first generation CTS was the car (with some help from its bling bling truck brother, the Escalade)that brought about Cadillac’s success within the last decade. When the 2003 CTS burst on the scene, it signified a change in General Motors’ direction for the luxury brand. No longer content to build cars for the Palm Beach retirement community, the powers that be decreed that Cadillac would now be a performance oriented luxury brand, one that would be the equal of the German bluebloods. Going so far as to tout the CTS’ European-tuned suspension (developed almost exclusively on Germany’s fame Nurburgring race track), the CTS was such a RWD shock to the segment (the first Cadillac in decades equipped with a MANUAL transmission) that it proved widely successful. It debuted not only Cadillac’s new performance mission but the styling theme dubbed ‘Art & Science’, and edgy direction composed of sharp angles and creases, not unlike the U.S. Air Force F-117 Stealth Fighter.

So successful was the CTS that Cadillac endeavored to polish the rough edges and continue the performance mission and the second generation debuted to much fanfare. Pitted as a BMW 3 Series ‘fighter’, the CTS dwarfs the smaller German in size if not in price, and seems more of a 5 Series competitor. In order to more effectively battle the European set on even terms (and to extend the CTS’s profit margins) Cadillac now offers 2 other body styles apart from the sedan: a positively stunning 2 door coupe and (surprise) a 5 door station wagon. To this blogger’s eye, the sedan as sharp as it is, looks quite pedestrian next to its coupe and 5 door brothers. The sport factor is also enhanced by the addition of the V Series (think BMW M or Mercedes AMG) which substitutes the regular 318hp, 3.6 V6 for the supercharged 6.2 V8 from the Corvette ZR1. Slightly tamed in CTS-V form, (due to the loss of an intercooler and dry sump oil system) this monster of a powerplant churns out 556hp and 550 lb-ft of torque, enough to see off both the BMW M3’s paltry 414hp V8 AND the BMW M5’s 507hp V10 (the new M5 counters with a 560hp twin turbo V8). 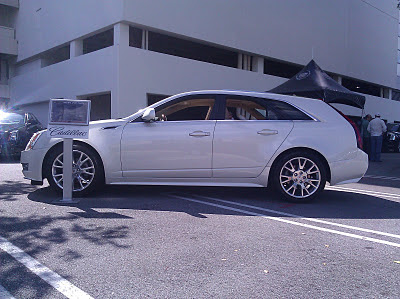 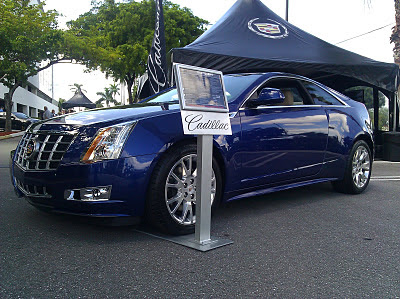 I recently had the chance to take a short drive in all iterations of the CTS (except the V Series, bummer) during a public demonstration on the beautiful streets of Fort Lauderdale.

Approaching the CTS, I got the feeling that Cadillac spared no expense in the exterior design. It’s next to impossible to confuse this for anything other than a Cadillac (your grandfather might think differently), the CTS sits purposeful with a wide stance and a form that hints at solidity and stability. Getting inside, I was met by high quality materials and a dash design that complimented the exterior. The center stack had a lovely V shaped design that encompasses the climate controls and buttons for the Bose 5.1 sound system in a logical fashion. Dials were ringed in real chrome and the entire console was flanked by vertical air vents on each side. An analog clock sits squarely in the middle with the navigation screen rising from the top of the center console. When stowed, the visible top quarter of the screen functions as an information center. 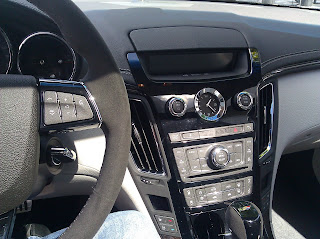 The front seats were plush and offered good support, plus heated and cooled functions for both driver and front passenger. Cadillac obviously neutered the bean counters when opting for high quality. The rear area offers good legroom and general space for passengers. The coupe, with its style-over-functions, is less accommodating but if you’re buying a 2 door you already know this. The 5 door wagon however offers similar rear passenger accommodations as the sedan but also comes with vastly more cargo room thanks to the artfully styled rear end. Cadillac’s styling theme lends itself rather nicely to the wagon’s handsome, long and lean appearance. The coupe however is the hands-down looker of the trio. 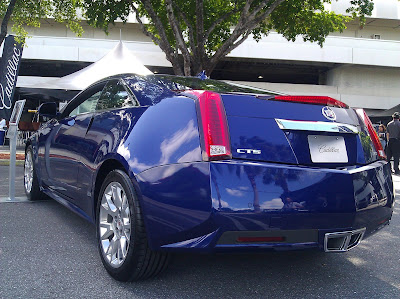 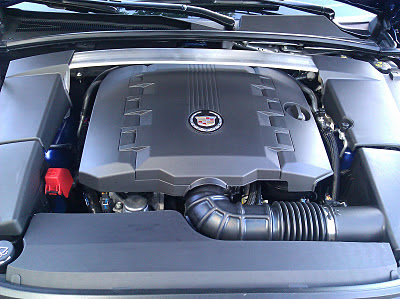 All CTS models (except the V cars) are powered by General Motors’ ‘high feature’ 3.6 V6, equipped with direct fuel injection, continuously variable valve timing and all-aluminum construction. This powerplant kicks out 318hp and 274lb-ft of torque and can be equipped with either a 6 speed manual as standard equipment or an optional 6 speed automatic (the only transmission on the regular wagon).

Pulling out of the parking lot, the 3.6 provides ample thrust for strong acceleration helped by the automatic transmission doling out torque in equal amounts. Due to the urban nature of the test area, I wasn’t able to fulling exploit the handling limits of the CTS, but in some instances, long sweeping corners exposed the stability offered by the car’s suspension and resistance to body roll. The steering was quick, offered the right amount of assist and communicates what the front wheels are doing to the driver. The CTS strikes a great ride/handling balance: sporty and firm, but not excessive as to register rough roads to passengers. The suspension is damped enough to acknowledge bumps as distant ‘thuds’ without upsetting the ride’s balance. One strike noticed however was the V6’s graininess at high RPM during one full throttle run using the auto transmission’s manual function. Above 5000 rpm, the 3.6 sounds unrefined, quite unlike the silky growl of BMW’s straight sixes.

Overall, the 2012 CTS is yet another shot across the bow of the European luxury marques. Equipped with a design that is unabashedly American and a platform that equals the ride/balance of its competitors, the CTS is yet another home run for Cadillac, now available in 3 sizes for every taste and with 2 powerplants for every level of leadfoot.