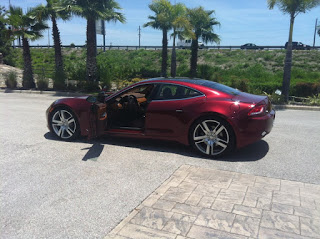 On Monday, June 4 I went to the Land Rover Orlando dealership that also sells the Fisker Karma to take a test drive. It came about because of a business deal I am looking at and I had filled out a form on the Fisker USA website for more info. Fisker called me to find out if the Orlando dealership had called to arrange the test drive and things were set in motion. I definitely appreciated that kind of service.
My wife and 4-month old, Luke, came with me to see the car as she had never seen one in person. The dealership was detailed in explaining the car to us; 50 miles on electric and then the gas engine would kick in. The color I really wanted to see was not there, Laguna, and after a call, it was explained that the color was never made. Really Fisker? The pictures are all over the web for promo! Anyway, I asked for the color code so if I did get one I would paint it over and have the only Laguna Fisker Karma in the world (I know that hurts resale value but I’m not buying the car because of resale value).
The various interior choices were shown and all except the tri-tone glacier suede wasn’t there, the one I really wanted to see. The trunk space was surprisingly big enough for golf clubs or two carry on suitcases which is perfect for me since I only travel with a carry-on and am getting into golf. It was awkward at first to see two “gas” covers”, one on either side. Of course one was covering the charging connection.
Sitting inside the car felt futuristic. The diamond device where the shifter would be was interesting and it looked like things would light up when the car turned on. My wife sat comfortably behind the drivers seat with me in it and she pointed out that a car seat would fit very well in the back as well. The battery runs down the middle of the car creating a natural barrier between the left and right seats in front and back. It actually felt nice, especially in the back. I however could not sit behind the drivers seat when I left it in my most comfortable position.
Then it was time to drive. 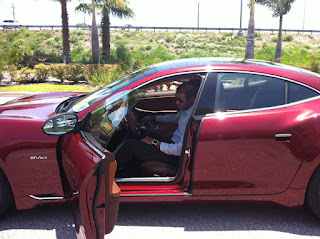 They brought out a red Karma for me with the tri-tone eco-leather interior. The wood trim was from reclaimed wood from the bottom of Lake Michigan. They take this green stuff seriously. Having driven a Nissan Leaf, I knew to expect almost no sound when the car started but the lights around the diamond were a nice touch. The leather steering wheel felt great and the view out over the bonnet was perfect for judging the length of the car. The ride was extremely smooth and cornering proved that the suspension was up to standard for a vehicle in this price range (I’ve driven a Gallardo and Z06 in the past). Acceleration is claimed at around 6 seconds for 0-60mph and the feeling of all torque at once can never get old. It was a blast to floor the pedal each chance I got no matter what speed I was doing.
The coolest part was the sound that Fisker engineered for the car to make when you accelerate and decelerate. Definitely sci-fi and right up my alley. All in all the car got a ton of stares, it felt well-built, the interior was luxurious, it was easy to shift between electric and gas mode with a simple click of the paddle and get more power on tap.
Is it for everyone? Few cars that cost $110,000 are for everyone. An electric/gas hybrid? Definitely not but it does have the advantage over the Tesla Roadster that it can go much further if you run out of juice. I live two blocks from my office and 10 minutes from Downtown Orlando so I am confident that a 50-mile electric range will be fine on a daily basis for me and guess what…if I want to drive to Miami for a party on South Beach then I can.
Am I sold? Yes. If I do get one then expect a monthly update right here and long-term driving impressions. 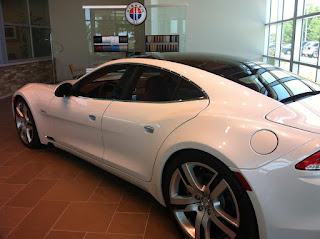