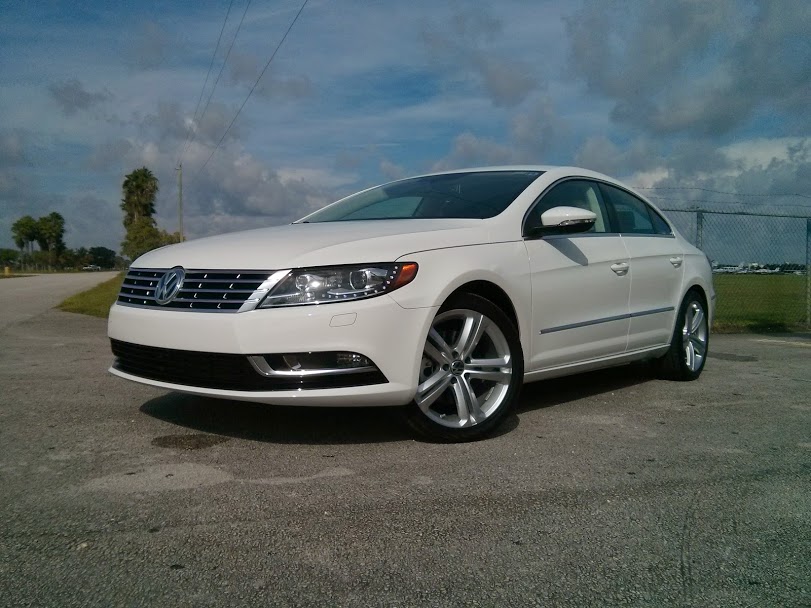 When is a coupe not a coupe? Trick question? In a quest to answer a question no one asked, Mercedes Benz birthed the CLS by dressing a standard E-Class platform in a sleek and voluptuous wrapper, giving rise to the segment busting four-door coupe era. So successful was the CLS that many manufacturers jumped on the bandwagon, some going to the extreme of dressing crossover platforms to look like coupes (we see you BMW X6). To an accountant, it’s a very easy and simple way to charge more money for what is, essentially, a pedestrian car. That Audi A7 you’re got an eye on? That’s the A6’s more handsome (and expensive) brother. The BMW 6 Series Gran Coupe? A stretched 6 Series with two extra doors, itself sharing a platform with the 5 Series sedan. Volkswagen decided to try their hand in the form of the CC (or Comfort Coupe), introduced in 2009. Like the E-Class based CLS, the CC is basically a European market Passat in a fancier, swoopier suit. I was never really fooled by this but it can’t be denied that styling does wonders to enhance a car’s image. If a Passat seems too bland for your tastes, then maybe the CC, newly refreshed for 2013, warrants a closer inspection. 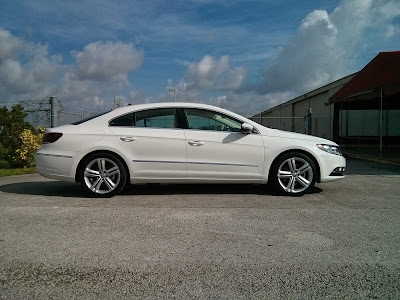 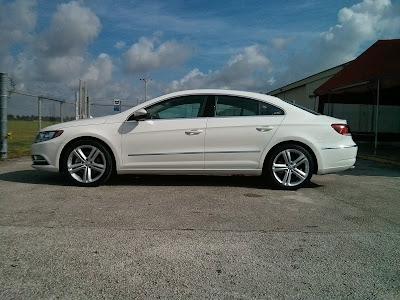 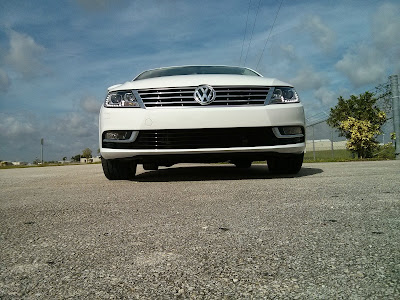 The CC has been quite a success for Volkswagen, selling in impressive numbers since its introduction. In order to keep the design fresh against newcomers, the CC underwent a nip-and-tuck treatment that sees the exterior styling get a good dose of edginess. While the basic outline remains the same, sharp creases now dominate the front end. A three bar chrome grille replaces the old one while LED daytime running lights highlight restyled bixenon headlamp bezels. Adaptive front lights are also available which swivel the beams into the direction the steering is turned for better illumination when cornering. The hood features two hard creases that run its length up from the outer grille edges to meet the A pillars. The sides also incorporate some sculpting with wider rocker panels and the rear end now has LED brake lighting that feature “CC” in their design. The Sport Plus’ 18″ wheels give the CC a good stance on the road and emphasizes the car’s width. Where the old car was softer in appearance with a more organic styling that really stood out, the new styling gives the CC a dose of aggression while still maintaining an air of elegance and richness. It’s not as at once identifiable as the old car but its stylish appeal is undeniable. 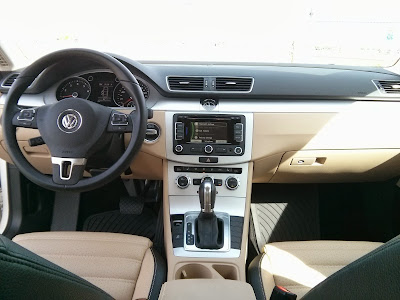 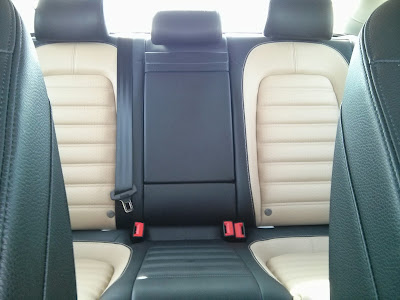 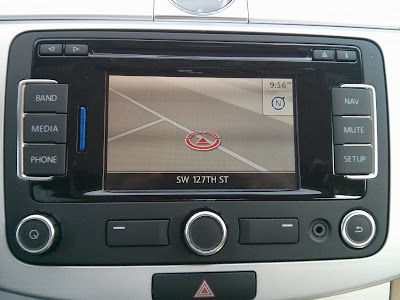 Inside, the premium air continues with typical high levels of German build quality, quite a step above the American-market Jetta and Passat. My 2.0T Sport Plus tester was decked out in a Desert Beige/Black leatherette material called V-Tex, a synthetic material said to be more durable than standard leather. Just tell your passengers it’s leather and they won’t know the difference. While most surfaces were buttery soft and premium feeling, some of the plastic aluminum accents felt a bit tinny and out of place in such a stylish cabin. The heated front seats are comfortable, supportive and power adjustable with good spacing for passengers. Rear accommodations are less so, befitting the CC’s fashion-first mission. While leg space was just about adequate, my head touched the headliner and the amount of room wouldn’t lend itself to comfortable three-abreast seating for anything above short trips. The seating position also places you low in the cabin with the window-line high up. Claustrophobia-prone passengers need not apply. Another thing regarding the rear seats: unlike the first-generation CC, the refreshed model now ditches the central rear divider for a slightly raised center seat, allowing a third passenger to ride.. The original two-place rear seating might have enhanced the look of the interior but many customers rejected the car because of the lack of a third seat. With this option, sales have picked up to the point where even the European CC now offers rear seating for three. However, even with this new feature, your three adult rear passengers will hate you after a road trip from Miami to Orlando. Small kids should be fine if they’re not claustrophobic. Or you can just buy the Passat next door. 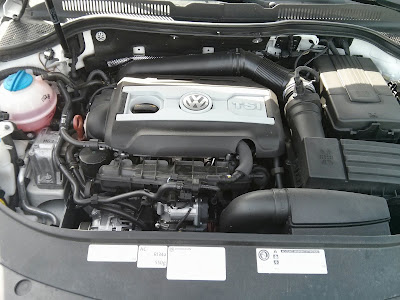 As the name suggests, Volkswagen’s well regarded turbocharged 2.0 liter direct-injected four cylinder provides the motivation for this tester with output figures of 200hp and 207lb-ft of torque, channeled to the front wheels via a 6-speed DSG dual-clutch transmission. Now these figures might sound measly, but having driven a 2006 GTI so equipped, I wasn’t in the least surprised at the ample power at hand. Where the 2.0T proved outright fun in the lighter Golf variant, in the CC it was more than adequate. Torque delivery is quite flat and readily available throughout the rev band, with just the slightest hint of turbo lag,  while shifts were typical-DSG smooth and imperceptible. At normal cruise, engine noise was kept mostly at bay with the only sound penetrating the interior being tire noise. While not deafening, it was noticeable enough but easily drowned out by the excellent 10-speaker sound system. Kick the spurs and the transmission will quickly ratchet down multiple gears to get the 2.0T in its sweet spot for almost instant forward thrust. Slip the selector into S mode and the transmission will hold gears all the way to redline, even anticipating a downshift when slowing for a corner. The driver can also take manual control via the gear lever, although for a car with the “Sport Plus” trim, paddle shifters are a curious omission. With a 0-60 time of just over 6 seconds, the 2.0T should satisfy the majority of customers. 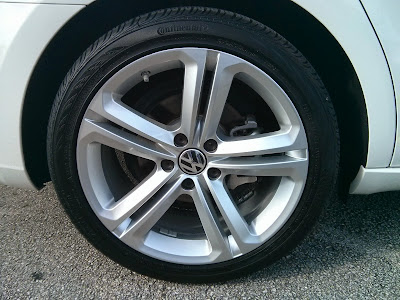 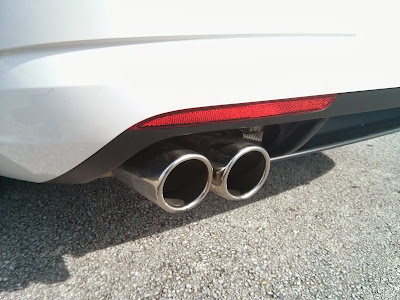 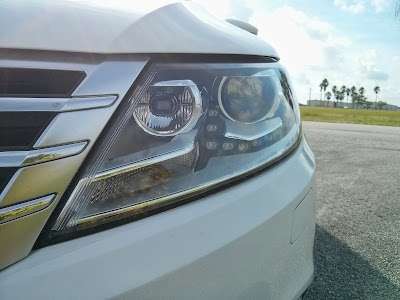 While the CC is no sports car, it doesn’t fall over itself when driven aggressively. Steering felt reasonably linear, losing some feel just off center. Ride quality when driven serenely is quite pleasant and solid, befitting its German roots. Despite the slightly stiffer suspension however, dive and roll when pitched hard into turns was substantial enough to tell most drivers to back off. The CC will change directions when asked as the steering is fairly responsive, but it prefers long sweeping turns as opposed to tight, twisty corners such as a racetrack  Don’t feel like dialing it back? Terminal understeer will get your attention quite early when powering out of tight corners, spearing you into the weeds, even with the grip available from the larger tires (a summer option is available). I found a good technique when driving the CC aggressively was to carry speed into a corner, letting the chassis settle and allowing the tires to assist mid-corner. Once through with the nose more or less pointed straight, the throttle can be nailed and the mid-range torque of the turbo four can assert itself without understeer becoming an issue. Driven at 6/10s, the 2.0T provides enough thrust to keep the drive entertaining. Over that and the CC’s Big Brother electronic nannies will quickly (and sometimes severely) slap your hand by aggressively cutting the engine and braking any slipping wheels. For the power-hungry, a 3.6 liter 280hpVR6 is available in uplevel models along with 4Motion AWD but the result would be a heavier and slightly more ponderous feeling (not to mention reduced gas mileage). Use the CC as a comfortable long distance cruiser and it will happily eat up the miles. Need more sport? VW has a GTI or Golf R with your name on it. 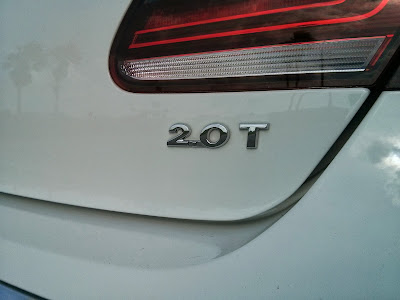 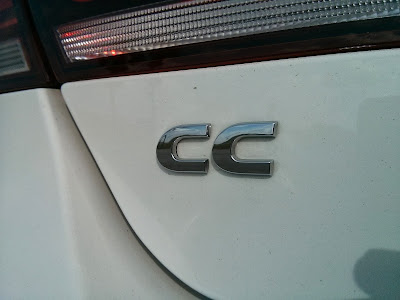 Pricing for the 2013 CC Sport Plus starts at $32,850 which includes the 18″ wheels, RNS315 touchscreen with navigation, LED daytime running lights, Dynamic headlights with Adaptive Front Lighting and the good sounding 10 speaker audio system with Bluetooth phone/audio streaming while the DSG transmission replaces the base 6 speed manual. A fully loaded model with the VR6 and AWD will land somewhere in the mid $40k region. Audi territory. Choose your options wisely. 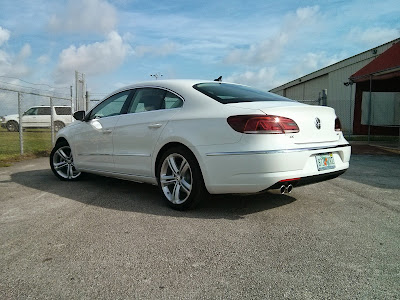 Competitors? Well there’s the long-in-the-tooth Nissan Maxima, Ford Taurus, the new Chevy Impala and equally new Toyota Avalon as well as the Korean Hyundai Azera/Kia Cadenza duo. Another curious competitor to the CC could come from inside VW’s own empire in the form of the Audi A4. While not as coupe-like as the CC (Audi has the pricier A7 for that role), the A4 does have a more premium nameplate and its base price sits at slightly less than $1000 more than the CC Sport Plus (although finding a base A4 with no options would be next to impossible). So is the Volkswagen CC worth the upcharge from the pedestrian Passat? If styling means more to you than practicality (really, isn’t that why coupes are bought in the first place?) and a Mercedes CLS is out of reach, then Volkswagen has the car for you.

Many thanks to Mario for helping facilitate the review!