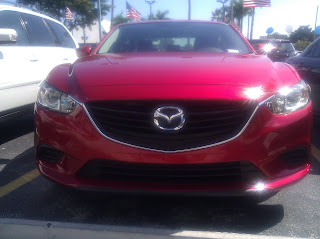 Needless to say, I’ve been waiting a long time to see this car in the flesh, let alone drive it. Having seen pictures of the production 2014 Mazda 6 adhering so well to the original Takeri concept (read my First Impressions here), there was little doubt that it would drive as well as it looks. Mazda’s stubborn (but faithful) attitude of building products for the buyer who relishes a curvy road is one that, in my opinion, makes the Japanese automaker distinguished from the other big time players. Sure Mazda’s products don’t sell in the same volume as Honda or Toyota, but Mazda’s refusal to make their products generic means that they must be content to sit behind the segment leaders. However, with the introduction of Mazda’s SkyActiv suite of gas-sipping technologies, the little Hiroshima-based company aims to appeal to current efficiency minded climate while still selling to the enthusiast driver.

But this time with a dash of style. 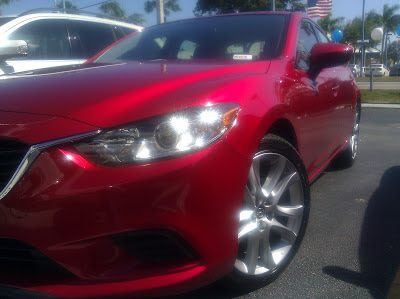 Since I’ve already covered the basics of 2014 Mazda 6’s design, I’ll be brief by saying that pictures don’t do this car justice. The styling, while not in the four door coupe stance as the Hyundai Sonata, is equally as striking. The wheelbase is longer by just over an inch and, thanks to platform technology shared with the CX-5 crossover, the 6 is an especially light car. Some 300lbs easier on the scales than its predecessor depending on the trim level. The stance is dynamic and, at a glance, the proportions give a hint of RWD even though the 6 is strictly a FWD vehicle. The dash-to-axle ratio can be thanked for that as well as the minimal front/rear overhangs. With my first generation 6 sitting beside it, the differences are quite stark but in good ways. Whereas the 2002-2007 model looks quite sporty (especially with the spoiler attached), the 2014 6 still has an air of sportiness about it, but also a higher level of finesse and authority. The exterior lines have much more depth and intricacy rather than the smooth, round and simple design of the first generation. The size difference is also apparent, the newer car casting a larger shadow and wider stance compared to the older car. 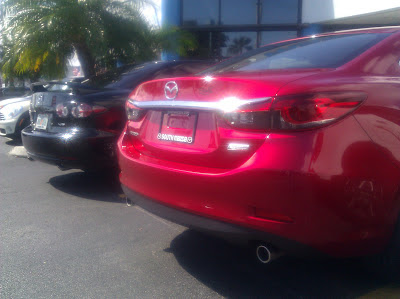 Getting inside, the interior features higher grade materials and great build quality. Compared to other sedans in the segment, the 2014 Mazda 6 dash appears simple and not as stylish (especially compared to the exterior) but the upside here is that all the controls are easy to reach and have a no-nonsense logic to manipulation (a great example being the three large knobs for the climate control system). The steering wheel is thick-rimmed and features EPAS (Electronic Power Assist Steering). Despite this there’s no sense of vagueness, although just off center steering feel is a tad numb. The large gauges are legible and features a small display between the speedometer and tachometer for reference to vehicle information such as fuel mileage, range, radio info and maintenance logs. The cabin is quite roomy with rear seat space good for someone of my height (just under 6ft). Both cockpits of the older and newer 6 models share a common simplistic theme to the controls and driver-seating positions. Outfitted with leather, and high quality materials, you’d be fooled into thinking the 2014 Mazda 6 was a luxury vehicle at a glance. Indeed, everywhere the fingers are likely to roam, the materials are soft to the touch and and don’t feel cheap or chintzy when operated. 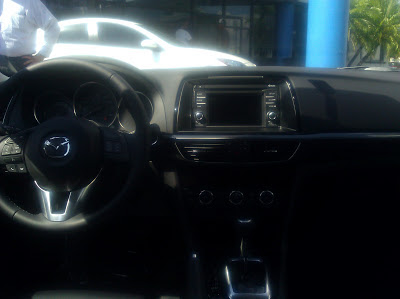 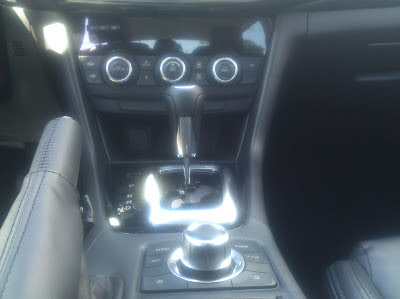 Initially, all new Mazda 6 sedans will be powered by a 2.5L SkyActiv-G (for gasoline) four cylinder engine. Featuring an aluminum block with lightweight, low friction internals, direct fuel injection, variable valve timing and a sky (no pun) high compression ratio of 13.0:1, the engine generates 184hp and 185lb-ft of torque, useful gains over the smaller 2.0L version in the CX-5 crossover (which will also get the larger mill in mid 2013). Power is routed to the front wheels through two new SkyActiv automatic or manual transmissions, both equipped with six speeds. An optional 2.2L SkyActiv-D diesel four cylinder with 178hp and 310lb-ft of torque will be available later in 2013, but don’t expect a V6 option (although I was told by an insider that Mazda was secretly working on one). My tester for the day was a Touring model, the mid-grade flavor of the Mazda 6 hierarchy equipped with the six speed automatic and painted Soul Red (a $300 optional color). 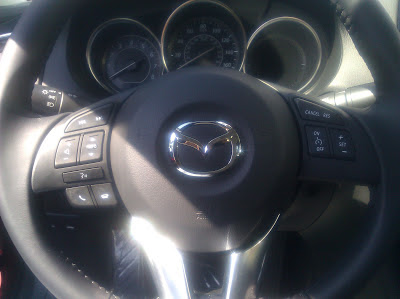 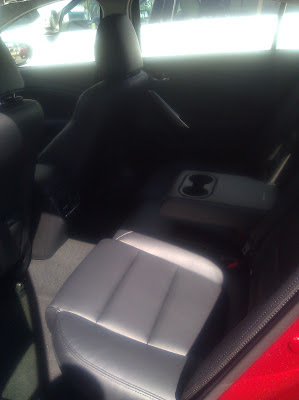 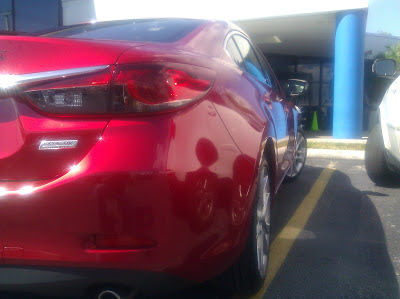 Out on the road, the Mazda 6 proved quite peppy and responsive. The 2.5L engine might ‘only’ have 185hp, but the six speed automatic knew exactly how to dole out the power. Through a series of challenging turns, the transmission, kept the engine in its sweet spot and was quick to summon a downshift if it thought I was approaching a turn. The manual shift function was a bit slow in responding to driver calls for shifts but the transmission is so intuitive at learning one’s driving style that this is a non-issue: leave it in D and let it do the shifting.  The suspension was taut and firm, but remarkable in smoothing out rough patches just enough that the ride didn’t seem skittish or harsh. Turn-in response was also quick and direct, the nose going exactly where it’s pointed. Braking was also quite good, a quick stomp on the binders returned good feel and short stops. It’s good that Mazda preserved the playfulness of the first generation Mazda 6, something that was almost absent in its larger 2008 successor. In this regard, the 2014 Mazda 6 and my 2006 model are quite similar. However, when it was time to settle down on the highway, the 2014 proved that it is leagues ahead of my car in terms of refinement. The ride was a bit more composed than my car and the cabin was much quieter, the transmission loafing the engine at around 2500rpm at under 70mph. I was able to carry on a conversation with Andres, my guide for the day, without having to elevate my voice which was quite a habit in my car. The seats were comfortable and supportive in the right areas and were multi-adjustable, also offering heated and cooled functions. The cockpit feel of my car is present and accounted for in the 2014 Mazda 6 where everything falls readily to hand. 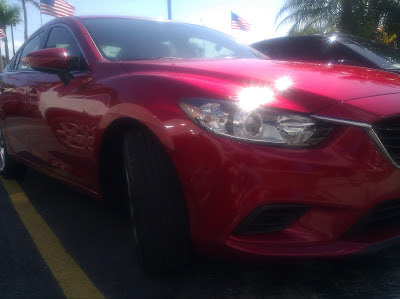 EPA fuel economy for the 2014 Mazda 6 rates at 26 city/38 highway for the automatic model (25/37 for the manual), really good numbers for a mid-sized sedan and rivaling numbers for the Nissan’s 2013 Altima. Pricing for the base model Mazda 6 Sport starts at an aggressive $20,880 when equipped with a manual transmission (only available on this model) while an extra $1615 ditches the manual for the automatic transmission. The Sport comes very well equipped with a laundry list of standard items such as variable intermittent wipers, a 6 speaker AM/FM/CD/MP3 audio system with inputs for auxiliary, iPod or USB sources, halogen daytime running lights with auto on/off headlights, tilt and telescoping steering wheel as well as push button start. Step up to the Touring model, like my tester, for $24,495 and add advanced features such as Blind Spot monitoring with Rear Cross Traffic alert, Bluetooth wireless for phone and audio-streaming, Pandora streaming  and HD radio, dual zone climate control, 19″ aluminum wheels (up from 17″), a 5.8″ touchscreen interface with SMS text audio delivery/reply and rear seat heat with A/C vents. The luxuriously appointed Grand Touring model ups the list for $29,495 featuring Bi-Xenon headlights with LED daytime running lights, a Tom Tom navigation system with traffic alerts, a full leather interior, steering wheel mounted paddles for the automatic transmission, an upgrade 11 speaker Bose audio system with Centerpoint technology, SiriusXM satellite radio, a power moonroof and Smart City Brake, an ingenious system similar to Volvo’s that automatically stops the car at slow speeds if an object are person is detected in front of the car. 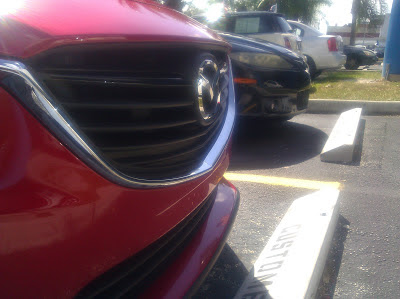 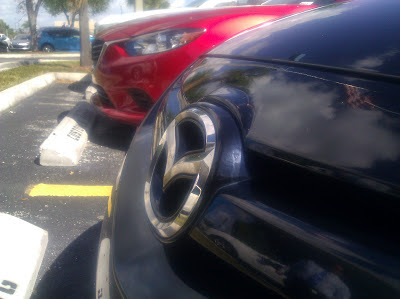 If the lack of initial engine choices isn’t a deal breaker, the 2014 Mazda 6 offers a very compelling and stylish alternative to the other mid-sized competitors. The sole gas engine is competitive in terms of power and efficiency and features such as a stylish exterior, roomy interior, an impressive equipment list and innovative safety touches stack up well in the segment. But if fun-to-drive is at the top of list, then Zoom Zoom is the only way to go.

Special thanks to Andres Molina and South Motors Mazda for allowing me the opportunity to test the 2014 Mazda 6. They are great people to work with and can be reached at 866-441-1733.