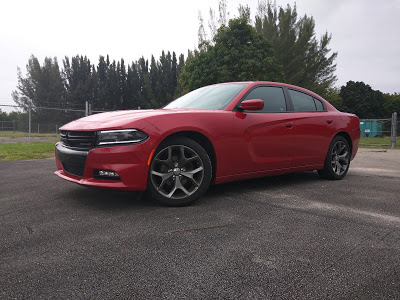 “That thing got a Hemi?”

Nope, it’s got a Pentastar.

What we have here is a Dodge Charger that looks like its got a fire-breathing V8 under the hood. I’m behind the wheel of a 2016 Charger SXT with the Rallye Appearance package that, at least externally, does quite a good job imitating it’s brawnier R/T brother: 20″ wheels? Sport suspension? Trunk mounted spoiler? Darkened fascia? All present and accounted for. Right up until you press the engine start button.

That is NOT a Hemi.

What it does have is a 3.6L V6 pushing out 300hp and 264lb-ft of torque (up from 292hp and 260lb-ft on the base SXT, thank you Rallye package!) through an 8 speed automatic transmission to the rear wheels. It neither sounds like a Hemi, or goes like one, but for 95% of the driving population, that’s more than enough. Riding on the LX platform that was last revised for 2012 (but dates back to the Mercedes Benz W211 of the early 2000s), the Charger is getting elderly but you’d never know by looking at it. Dodge sought to give the Charger a more Euro look for 2015, starting up front with a Dart-like face accented by a blacked-out R/T clip that, along with LED running lamps around the HID projector lights and in the lower fascia, gives the Charger a sinister look. The rear end is more rounded and, to my eye anyway, better integrates the ‘race-track’ tail lamps that identify the Charger as a Dodge product. The scallops along the sides that look tacky and forced on the 2014, looks smoothed in and better styled now. Those fakey-doo exhaust outlets now have a more styled appearance and while I wish the tailpipes were actually attached to them, that’s just a minor nitpick from me.

The Charger is a full sized car and with that comes wads of interior room. Front passenger room is more than adequate and it was easy to find a good driving position. The front seats could’ve used more bolstering, but then that’s why you’d by the SRT models. Rear seat room was spacious with ample leg and knee room and three passengers shouldn’t have a problem on extended drives. With the revamped exterior comes a reworked interior and it certainly looks it. Behind the new three-spoke steering wheel sits a new gauge cluster that is at once, both nice to look at but slightly infuriating due to the small font of the numbers. However, the new TFT display between the gauges is a welcome addition. Front and center in the dash is the Chrysler UConnect 8.4″ infotainment system that remains one of my favorites. The display is intuitive and has quick reaction to touchscreen inputs, the downside being fingerprint accumulation. The shifter, another sticky point of just a few years ago, has been revised to include actual detents based on gear selection so no longer did you have to look at the TFT display to see what gear you were in (take notes BMW). All in all, the interior feels pretty luxurious compared to the 2014 model.

Driving around some airport B roads, the Charger drives big but its firmly damped suspension helps it carry the weight with aplomb. It’s only when you really lean into corners that you realize Sir Isaac Newton wasn’t kidding about physics. While the 300hp V6 doesn’t allow for the tail out shenanigans of the Hemi, there’s still enough power on tap to at least make the Charger sporting. One of the changes for 2015 is the Charger’s move to electric power steering and three modes to change the steering feel: Normal, Comfort and Sport. Comfort mode makes the steering feel light and allows for easy parking maneuvers while Sport adds (artificial) heft and makes the Charger feel smaller than its 120″ wheelbase would suggest. I did try to get the tail out (purely for testing purposes of course) and was able to, while using the shift paddles but 264lb-ft aren’t enough to hold it out in a powerslide. That being said, the ZF-sourced 8 speed auto is a fantastic piece, offering seamless upshifts when cruising and quick downshifts when it detects you’re approaching a corner. The paddles do work but don’t expect dual-clutch levels of responsiveness from them. The brakes, single piston units front and rear, stop the big Charger with authority and exhibited little fade. Underway, the Charger is remarkably quiet and refined, the Mercedes architecture showing itself with bank vault solidity and stiffness. Even though this is an elderly platform, kudos to Dodge (nee Chrysler) for the continuous refinement and tinkering to keep the LX architecture on par with newer platforms.

As this is the SXT level, what you lose in power compared to the fire breathing Hemi variants (5.7L, 6.4L, 6.2L Hellcat) you gain back in gas mileage. The EPA rates the V6 Charger at 19 city/31 highway and I averaged a respectable 26 mpg during my few-hours long flog…er, testing. All wheel drive is an option though it saps fuel economy by 1 and 4 in city/highway respectively. The 2016 Dodge Charger SXT Rallye is a big car and harkens back to a time when full sized, rear wheel drive cars ruled the road. While crossovers are the it-thing today, the Charger still gives its driver all-American bragging rights over plebian Accords and Camrys, if not at the dragstrip. For those chops, Dodge will gladly point you to the 707hp SRT Hellcat in the corner.

Many thanks to Ernie for helping facilitate this review!