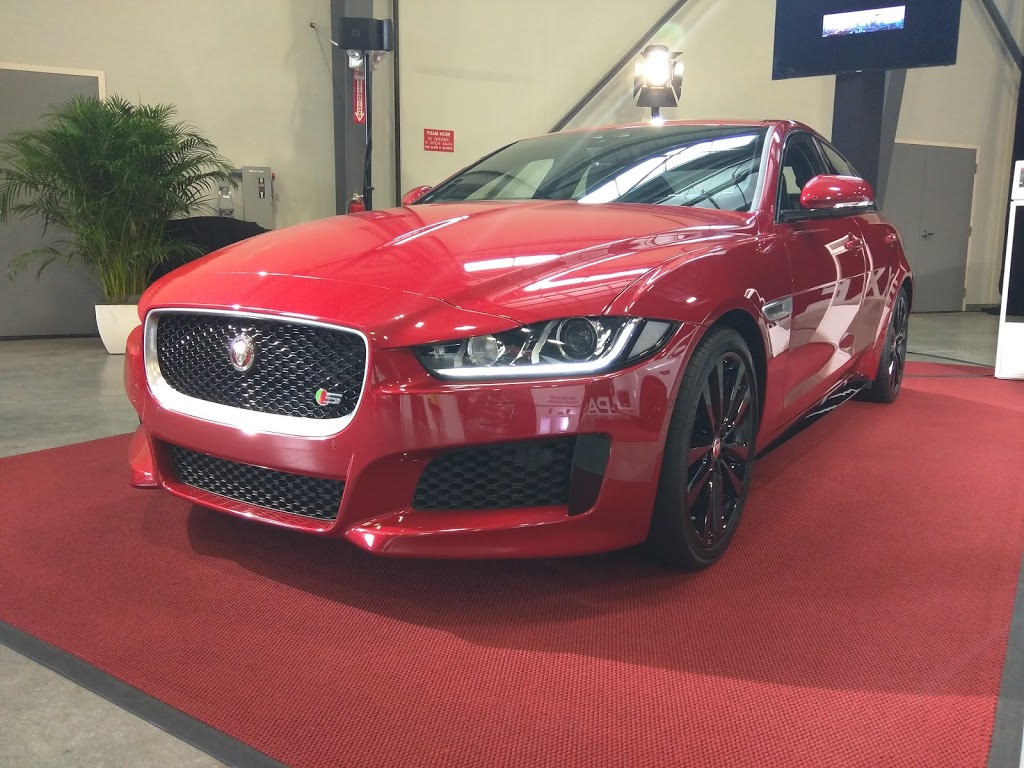 Do you remember the X-Type? That supposedly premium clone of the European Ford Mondeo that Jaguar tried to market as a BMW 3 Series competitor? Yeah, no one really does either and Jaguar would prefer to keep it that way. Now with Tata Motors as its parent company (and one that is willing to spend the necessary cash without the look-over-your-shoulder mentality of previous suitor, Ford), Jaguar has decided to lob a second, more proper dart at the bulls-eye that is the BMW 3 Series and, dare I say, they might’ve nailed it.

At the Jaguar Audition event, I was introduced to the new 2017 XE, a car Jaguar will use to anchor its lineup at the more affordable end, giving the mid-sized XF some much needed breathing room to do battle with 5 Series/A6/CTS/E-Class. Gone is the jellybean, doughboy classical style of the X-Type, the XE adopting the look of the larger XJ and XF sprinkled with cues from the F-Type sports car. Walking in to the main hall, the entire lineup was presented and taking all cars into account, the familial styling is evident. To say the XE is as beautiful as the F-Type would be a stretch. After all, we are talking about a three-box shape on to which Jaguar chief designer, Ian Callum, has to make the XE stand out in a sea of BMW 3 Series, Audi A4s and Mercedes C Class sedans. However, with the previous XF as proof of his master craft, I’d say he pulled it off. The sheet metal is drawn taut over the aluminum-intensive chassis and features clean lines, leaving any sort of intricate detailing to its more expensive brothers. However, cues such as the rectangular grille and tail lights inspired by the F-Type and J-blade LED running lamps inset into sinister headlights give the XE its own Jaguar look.

As before, the all new, modular platform makes extensive use of aluminum to cut down body weight, although on the scales, it doesn’t really show. Weighing some 3700 lbs, the XE is right up there next to the 3 Series. As a matter of fact, the XE’s dimensions closely mirror that of Bavaria’s finest, coming within an inch or two in length, width and wheelbase. Under the hood, however, is where the differences end. While the 3 Series, specifically the 340i, employs a silky turbocharged inline six cylinder, the XE shares the supercharged 3.0L V6 from the F-Type. In my XE-S example, the V6 stomps out 340 hp and 332lb-ft of torque through either the rear wheels or optional all-wheel-drive (coming later in the model year). Looking at the engine, I was amazed at how large and long it was. Then I remembered its 90 degree cylinder spacing is the same as that of the larger 5.0L V8 in Jaguar’s uplevel sedans. As a result, in order to cut costs, Jaguar made both engines to use the same engine mounts. While most other luxury compacts have migrated to front struts and simple multilink rear suspensions, Jaguar went its own way and developed a double wishbone front suspension with integral links anchoring the rear. The result is a car with a ride/handling balance that many, more expensive cars struggle to approach.

Inside, the XE presents a simple, clean layout of all controls and a premium-feeling cabin. You won’t find the larger XF’s robot air vents doing there dance whenever the vehicle is powered up or down. However, the gear shift continues to be a rotary unit which rises from the center console when you start the XE. Gimmicky at first but forgettable after a few uses. I didn’t play with the infotainment screen much but I can report that the unit is clear and legible, responding quickly to inputs. I’d much rather have dedicated, hard controls for simple functions as radio tuning or volume control but steering wheel controls make that largely a non issue. Sitting in the backseat, there was enough space to get comfortable and not feel cramped. It may not be a full sized car, but it’s less cramped than say, a Cadillac ATS backseat. The leather front seats though are gorgeous and what they lack in bolstering for track use, they make up in support and comfort. The cabin overall feels very airy and open thanks to the low cowl and huge sunroof.

Pressing the glowing start button, my ears were met with the howl of the big 3.0L. One thing Jaguar engineers know how to do is tune a car’s exhaust and intake noise. If the F-Type is any indication, they’ve done magic in the XE. Turning the rotary shifter to D, we roll out of the parking lot along Opa-Locka airport’s B-roads in Eco, one of the four settings that changes the car’s mood according to the driver’s wishes. In this mode, the XE’s throttle response is dumbed down, the exhaust goes silent and the ZF 8-speed transmission falls in love with the upper two gears. Approaching an empty stretch of arrow-straight road, I switched the transmission one notch over to S and instantly, the XE felt racier. The display between the speedometer and RPM dial turned red, now displaying the current gear, the exhaust baffles opened up to create that characteristic (some might say obnoxious) engine bark that Jaguar vehicles of recent are known for and the steering effort increased and stiffened considerably. Flooring the accelerator, the XE dropped from loafing in 8th gear down to 4th and surged ahead, the exhaust doing its best impression of a NASCAR racer. Within a few seconds, we had left 40 mph in the dust and were now cresting 75 mph. Seeing an intersection rapidly approaching, I lifted off the gas and simultaneously engaged the steering wheel-mounted paddles. The ZF transmission responded smartly to my commands, all the while my ears were treated to the aural pleasure of the exhaust popping and crackling. This supercharged V6 may not have the smooth, turbine sound of BMW’s straight six motors, but it definitely trumps them in terms of exhaust tuning. I must say, through all the ruckus of the road drive, Jaguar did an excellent job in nearly silencing the characteristic whine of the supercharger. It’s only heard in the very upper reaches of the RPM range and I struggled to hear it during normal driving.

Jaguar’s intention for the XE is to anchor its lineup at the affordable end of the market: allowing the driver a sports sedan while still being civil enough to take the mother-in-law out to dinner. In this role, the XE is a pleasure to drive. While the ride is firmer than most, it isn’t punishing. The structure is vault-like in feel and the suspension only allows the worst road imperfection to filter through to the occupants. Even then, you’ll know you hit a pothole by hearing a “thump-thump” as opposed to feeling it through your rear end. Back at the airport, I was given the opportunity to put an XE-S through its paces at small autocross course. First would be a flat-out speed run, followed by a hard stomp on the brakes for a long sweeping left turn. That left turn would suddenly become a sharp 60-80 degree left, then an acceleration run up to a series of quick right-left-right corners followed by another hard braking section. Once given the signal, I floored the gas and the XE jumped off the line, the transmission smoothly selecting gears before abruptly jumping off the gas and on to the brakes. Those binders bit hard and the XE quickly shed speed for the upcoming corner, the transmission smartly anticipating the corner and downshifting to the proper gear. Steering feel was excellent and about mid turn, I was able to get the tail out slightly to help rotate the car. Yup, there’s definitely a hint of F-Type in the tail-happy way the XE attacked corners. However, the slide was manageable and easily controlled. Through the tight, twisty section of the course and under acceleration, the XE never lost its poise, deftly threading the turns with just enough throttle steer to keep the nose pointed in the right direction before coming to the end of the course. The last car I had driven in anger this way was a 2015 BMW 320d and it was uncanny how similar the XE felt. While yes, the BMW was diesel powered and would’ve been trounced by the XE in a straight line, the sporty goodness was certainly there, although I’d give the nod to the XE in terms of sheer all around enjoyment. The steering feel was better in the XE and while the BMW had a very slight tendency to float before taking a set, the XE was more buttoned down and willing to rotate with very little body roll.

While the unloved X-Type was a very expensive lesson, the 2017 XE proves that Jaguar is a keen learner. The only way to take on the established set is to have a premium compact, luxury sedan of your own and build it from the ground up rather than using the metaphorical method of trying ti turn a goose into a swan. Here, I think Jaguar has hit the target squarely. It also helps that, in its chase for more sales and volume, BMW has dulled the 3 Series to appeal to more buyers, making its perch very unstable. While the 3.0L V6 is a very good engine, it also inherits some of the thirstiness exhibited by its larger V8 brother. For buyers sensitive about fuel economy, Jaguar will introduce a new line of four cylinder engines dubbed ‘Ingenium’. A 2.0L four cylinder in the 240hp range will be the base model, followed by a diesel engine based on the 2.0L four. To tackle the likes of M, AMG and Quattro GmbH, you can be almost certain of an XE-R/RS/SVR model to follow a few years later. With some $3 billion dollars spent on its development, the XE needs to not just bring the fight to BMW and the other German rivals (not to mention the very good Cadillac ATS), but be a great vehicle in its own right. Jaguar has a lot riding on this platform, what with the XF sedan and F-Pace crossover following up. In this blogger’s mind, the 2017 Jaguar XE could perhaps be the new king of the hill. Your move, BMW.

Special thanks to Jaguar for the invite and making this review possible. I tried out for a commercial featuring the new Jaguar XE and the video can be viewed here. I make no bones of being an actor but hey, it was fun!