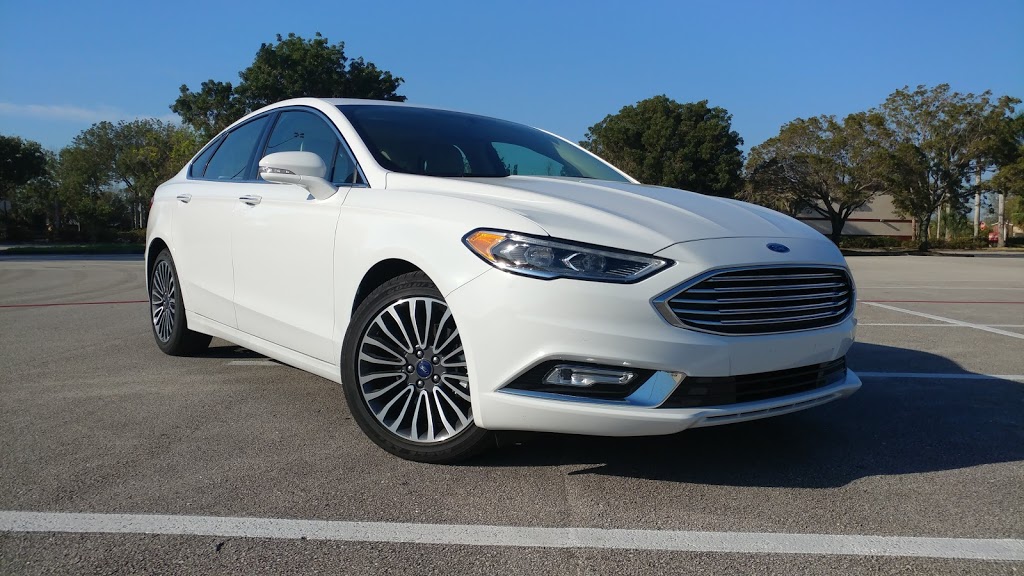 Recently, I was given the chance to test a 2018 Ford Fusion Titanium model while my own ’13 Fusion was in the shop for service. Having been updated for 2017, here was an opportunity to see the changes made up close and whether or not Ford has really improved on an already good car.

On the exterior, the ’18’s more chiseled and refined look is readily apparent. The grille has more of a rounded look and is slightly less garish than before. Headlights are squintier and now employ LED lighting as LED running lights (and fog lights). The side profile is largely the same while at the rear, a chrome strip now runs in-between the restyled taillights. Not a dramatic restyle,more of a subtle freshening that does improve on an already good looking sedan. Among its peers, the Fusion is still one of the most attractive mid-sized sedans on sale today.

Inside, the seats were fitted with nice cream leather, dashboard and areas surrounding the 8 inch touchscreen had a soft touch material similar to my Fusion. Disappointingly, harder, cheaper plastics still plagued areas below the regular touch points, such as the glovebox and console surround. Also annoying, the top half of the door armrests were outfitted with soft materials where you’d normally rest your elbow, but hard, cheap plastic immediately below that. The contrast was surprising,especially in the Titanium model where materials were supposed to be a bit nicer than my SE model. The transmission lever has been ditched in favor of a rotary gear shifter, obviously taking a page from Chrysler. This frees up space on the console and junks a major irritant of mine: the rocker switch on the transmission lever for manually selecting gears. Paddle shifters are now present on the steering wheel, a far easier way to manually manipulate the transmission.

Another huge change was the departure of the maligned and fiddly MyFord Touch infotainment system and the arrival of the new Sync 3 system. With snappier response and a more intuitive design, the system proved infinitely easier to use and with the addition of Android Auto and Apple Carplay, drivers have the choice of how to interact. Also gone are the touch sensitive surfaces below the screen, replaced with a logical array of buttons to manipulate the sound system, climate control and heated seats. Overall, the interior is still a nice place to reside. The front seats have good support, lacking only side bolsters to hold the driver in place during spirited driving. Rear seat space was also good, though the leather is slightly harder. Trunk space is roomy, though I did notice the handle on the inside of the trunk lid was no longer there. This might be nitpicking, but it was nice to not have to touch a dirty trunk lid in order to close it on my ’13 SE Fusion by using that handle. A minor issue probably, but someone upgrading from a ’16 to a ’17 Fusion will notice.

Engine choices haven’t changed dramatically during the revamp, save for the addition of the 325-hp, 2.7-liter twin-turbo V6 in the new Fusion Sport.  A 1.5-liter turbo four-cylinder producing 180-hp replaced the 1.6-liter used in the SE model while the 2.0-liter turbocharged four-cylinder sees a 5-hp increase to 245-hp. Base Fusions can still be had with a naturally aspirated 2.5-liter four-cylinder. All powerplants drive through a six-speed automatic which has been tweaked for smarter shifts. All-wheel drive is optional with the 2.0-liter and standard with the V6. A wide array of wheel sizes and designs are available from 16″ up to 19″. My Titanium tester sported machined alloy 18″ wheels which nicely played off the Oxford White paint finish.

Setting off, the driving impression is not too different from the SE though there is a more solid, substantial feeling through the steering and seat. This Fusion felt a lot more smoother and planted, perhaps due to the addition of all-wheel drive. However, unlike the lighter SE, the Titanium’s responses were dulled by its weight and unwillingness to quickly negotiate tight turns. The 2.0-liter’s added thrust however made short work of spots in traffic and traction was never an issue. Turbo lag was inherent, but the newly tweaked six-speed automatic shifted decisively and always found the right gear, keeping the turbo four in the meat of its power band. Pushing the S button in the middle of the rotary shifter makes gear swaps snappier and holds gears longer. The overall impression of the Titanium model is more of a relaxed cruiser than corner carver which is just fine for most people. Drivers seeking more thrills will want to check out the Sport model. The Titanium was also well equipped with the aforementioned Sync 3 system including voice activated navigation, SiriusXM satellite radio and travel services, a power moonroof and Sony sound system. The Fusion starts at $22,215 for a base model with the 2.5-liter engine while my Titanium tester starts at $30,490 with an as tested price of $32,430.

Ford has done a good job building on an already good sedan. The 2018 Ford Fusion is still a competent pick in an ever increasingly competitive set of sedans. While it may not be the sharpest handling, or most comfortable out there, it does most things well enough to satisfy a broad swathe of people. However, with the popularity of crossovers reaching a fever pitch, the Fusion’s greatest foe might not be the Accord or the Camry, but from the Edge and Explorer crossovers sitting across the showroom.

Special thanks to Pines Ford for aiding in this review!