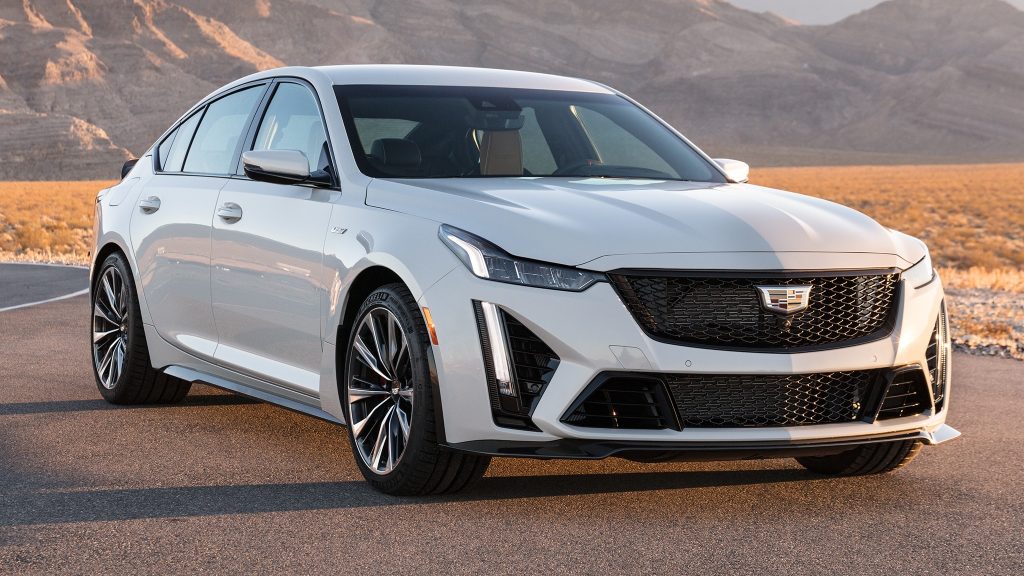 If there’s one car that I lust after, its the Cadillac CTS-V. Specifically, the second generation wagon body style with the rare 6-speed manual transmission. Nothing like an unassuming 556-hp wagon to start your daily commute with and scare a couple of sports cars along the way to work. Cadillac has had a successful run of its V performance arm, each entrant dealing a bloody nose to its German competition. The third generation CTS-V with its 640-hp supercharged V8 is still revered in the market in terms of sheer power. Never-mind being handicapped by RWD (every competitor has since switched to four driven wheels). Cadillac has now shelved the CTS, replaced by the CT5 and, lest you think the CT5-V was the replacement, don’t worry. We were all fooled initially. That model replaces the previous V-Sport moniker, which is a step below the full blown performance model. What you really want is the Blackwing badge.

The 2022 CT5-V Blackwing picks up where the previous CTS-V left off, sporting an evolved version of the supercharged 6.2-liter V8. Power climbs to 668-hp and 659 lb-ft of torque. The V8’s massive power is put down to the (Praise Jah!) rear wheels by a (hallelujah!!) standard 6-speed manual transmission. All as God intended. Yes, you can be a whiny baby and swap out the manual for a quicker-shifting 10-speed automatic. Figure 0-60 times of 3.7 seconds with that. We don’t care. Get the manual. Yes, you will be slower. We still don’t care.

The basic goodness of the CT5’s Alpha platform is fortified for Blackwing duty to the tune of an underhood strut tower brace, massive Brembo six-piston front and four-piston rear brakes available with carbon-ceramic rotors. The fourth generation of Cadillac’s adjustable magnetorheological shocks has also been fitted along with staggered, 19-inch forged wheels shrouded with Michelin Pilot Sport 4S tires 10mm wider than on the CTS-V, an electronic limited slip differential and all manner of transmission and differential coolers to keep temperatures in check. The experience gained from 20 years of track testing on the Nurburgring has definitely made this the most track focused offering from Cadillac.

Outside, Cadillac differentiates the CT5-V Blackwing by a smattering of aero enhancements including a front splitter, drag-reducing underbody panels and functional fender vents. The enlarged black, mesh grill incorporates functional brake cooling ducts and wider fenders to fit the bigger wheels. At the rear, a larger spoiler adorns the trunklid and quad exhaust tips bracket a subtle rear diffuser. A package will be offered to swap out the aero pieces for real carbon fiber. Get inside and leather wrapped, carbon-fiber-backed seats immediately greet your derriere with red and white stitching and sport 18-way adjustability (plus heating and cooling functions). Your hands fall on a steering wheel wrapped in leather and carbon-fiber trim, adorned with a red center marker and number plate identifying the car’s place in manufacturing. GM’s Performance Data Recorder makes another appearance, giving the driver the ability to record video and performance data from track sessions. What makes the V Blackwing such a track beast is the Performance Traction Management system, which varies the car’s stability, traction, suspension damping and electronic differential to dial in various modes. These include Tour, Sport, Track and a customizable My Mode. In a nod to the Corvette, the 12-inch digital gauge cluster gains more performance functionality and customization options.

Starting at $84,990, the 2022 CT5-V Blackwing is not only tens of thousands cheaper than your equivalent BMW M5 or Mercedes E63 AMG, but also undercuts the CTS-V by a few thousand as well. Think of that for a second. The most powerful competitor is probably the AMG GT63 but is still 38-hp shy, heavier and tens of thousands more expensive.

It’s sad knowing that the 2022 CT5-V Blackwing (and its kid brother CT4-V Blackwing) will be one of the last gasoline performance models from Cadillac (listen for more of that in Episode 8 of the Road Hoggs podcast). That is goes out with a 668-hp bang is fitting. And saving the manuals at the same damn time.