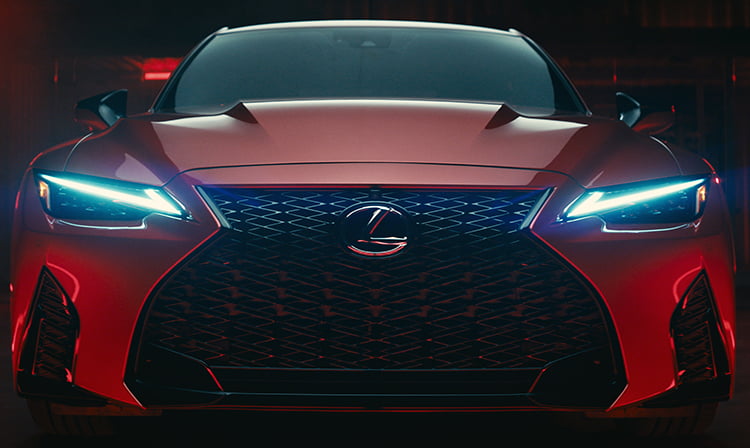 The old Lexus IS F was a breakout model for Lexus and helped bring relevance and excitement to a brand known mostly for quiet, serene luxury. The F brand (think BMW M, Mercedes AMG, etc) soon followed up with the 2-door RC F and the mid-sized GS F (RIP). Curiously missing from that lineup was the IS, even years after the third generation landed for 2014. Sure, we got F Sport models with starchier suspensions and exterior doo-dads but nothing along the lines of a true F model. Following the redesign of the IS line for 2021, Lexus has now followed up with the IS500 F Sport Performance, a model that, while still not a true F model, reunites the IS with a V8.

The IS500 is the first model of Lexus’ new F Sport Performance line that sits just above the F Sport trim level but below the full tilt F models. Think along the lines of BMW’s M Sport, M Performance and full M models. Confusing I know.

The naturally aspirated 5.0-liter 2UR-GSE V8 is an evolution of the original in the old IS F and identical to the unit in the RC F and LC500. Output sits at 472-hp and 395 lb-ft of torque all routed to the rear wheels through an 8-speed direct shift automatic. Acceleration figures around 4.5 seconds from 0-60 and handling will be a step above the IS350 thanks to the optional Dynamic Handling package being standard here. This brings a Torsen limited-slip differential and the Adaptive Variable Suspension. Lighter 19-inch Enkei wheels with performance tires bring the road stickiness while larger brakes (14.7 inch front and 12.7 inch rear) bring the halt to the IS500.

Visually, the new IS500 is distinguishes itself from plebeian grade IS models by a pronounced hood bulge and enlarged front fenders to house the bigger motor, The front bumper is slightly larger to enhance engine cooling while the rear bumper incorporates a diffuser and is framed by the signature F stacked, tailpipes. A subtle decklid spoiler adorns the trunk and dark, chrome pieces finish the exterior along with black, F Sport badges. Inside, different pedals and a slightly updated gauge cluster says, you upgraded.

Now a few questions immediately come to mind. After reports surfaced that Lexus was killing the 5.0-liter V8 (and a twin-turbo version that would’ve debuted with the LC F), why is Lexus doing an about face? More importantly, since the IS500 is, supposedly, a step below the full F designation (especially in light of the full-boat RC F having the same engine), will there be a full IS F coming later? How will Lexus price the IS500 relative to the BMW M3 and Mercedes AMG C63? Here’s my take (and take this with whatever sized grain of salt you got lying around).

The 2022 Lexus IS500 F Sport Performance will go on sale in the fall with pricing to be announced shortly before. With the death of the GS F, the IS500 has taken its spot as the go-fast sedan of the Lexus lineup. Not many naturally aspirated V8s are on the market, especially in this segment so we’ll gladly accept another offering, even if it’s Lexus swan song for this unit. Enthusiasts, buy ’em up if you can.