All three were automotive icons before most of us were even thought of. Back when gas prices were at levels we can only dream were such today, America’s idea of cool was small to mid-size car packing a huge 300+ cubic inch V8s creating obscene amounts of power. This was the basic recipe of a muscle car and the same holds true to some extent today. While the Ford Mustang has been in continuous production since its inception, the Camaro briefly left the scene for several years before making a thunderous return in 2007 as a concept that Chevrolet had to make a production reality to the applause of numerous Chevy aficionados. The Challenger was short-lived but arguably the most remembered, having left the scene in the 1970s only to return in 2007 also as a concept that Chrysler thought was too good not to produce.

Let’s start with the Ford Mustang.

Looking at the current model, if you squint hard enough, you can just about see where Ford gets its inspiration from. That would be the original ’68-’71 Mustang. From the grille-mounted fog lights and low mounted hood, to the short deck and sequential tail lights, the 2011 Mustang screams retro. The same can be said regarding its underpinnings which employ McPherson struts at the front and a solid axle in the rear. Wait…what’s a live axle doing in a modern car? (No, the Crown Victoria/Grand Marquis/Town Car don’t count as modern). A little background info for the less technically inclined reading this.

A solid live axle suspension is basically a (usually round) metal beam with wheels on either side suspended by either a network of leaf or coil springs. Light duty trucks (i.e. Ford F-150s, Chevy Silverados etc) usually have these equipped with leaf springs for towing or hauling heavy loads. In these instances, the durability of these suspension designs are unquestioned. But the Mustang employs this age-old design with coil springs (see image above) for ride comfort, high power and sportiness. Pretty soon though, Ford’s muscle car will be the only car with this antiquated suspension system but it’s nothing short of a miracle the way Ford has reworked and modified it for Mustang duty.

Back in its heyday, the Mustang and its rivals were great at doing only one thing (besides looking cool): going quickly in a straight line. Then, the ultimate quest wasn’t time attack or rally racing; it was the fasted through the 1/4 mile. In this setting, the Mustang and others of its ilk excelled. But show these powerful machines a set of corners and they quickly reveal their Achilles’ heel. In a few words, cruise ship levels of body roll. As such, suspensions using wheels that were free to move independent of each other are more wide spread nowadays to the point where even the Mustang’s recently resurrected rivals employ this design. But drive each car back to back and only the very tuned arse can tell the difference. 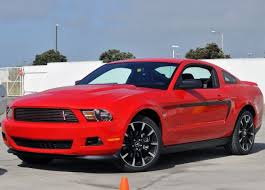 Following a still fresh redesign for the 2010 model year, Ford followed up with a pair of thoroughly revamped engines for the 2011 model year (anyone who bought a 2010 model must feel like crap after reading this): a 3.7 liter V6 producing 305hp and a 5.0 liter V8 in the Mustang GT that puts down 412hp, both substantial jumps in power from their predecessors. The V6 engine is a solid 95hp bump over the old Cologne designed 4.0 and is just 10hp shy of what the old 4.6 liter V8 was capable of. Both are equipped with what Ford calls Ti-VCT (Twin independent variable cam timing) that enhances breathing and efficient power delivery as well as less fuel consumption. Previously, you wouldn’t buy a V6 Mustang for any sort of performance reason (I mean really, with the old 4.0 V6 model you wouldn’t want to test a VW GTI or Mazdaspeed3 driver at a stoplight drag race) except for maybe a rental? Now, Ford is seriously pushing its former Secretary special as a genuine performance vehicle. With a [Motor Trend tested] 0-60 time of 5.1 seconds and a 1/4 mile time of 13.7 seconds at 102 mph, the new V6 model is nearly as quick as the V8 in the 2010 GT. Plus it’s more fuel efficient than ANY previous Mustang (or car in its class) with EPA MPG figures of 19 city/29 highway. So yes, you CAN have your cake and eat it too. While the V6 is a substantial and noteworthy leap for the Mustang, the power hungry are going to want to stick around for the new GT. The new “Coyote” 5.0 liter V8 produces 412 hp and 390 lb-ft of torque for a much improved 0-60 time of 4.3 seconds and a quarter mile time of 12.8 seconds at 110.8 mph. Do you NEED a V8? Well that depends on what you want from a Mustang. The 3.7 is certainly a powerhouse in its own right and moves the Mustang with more than enough thrust as the figures suggest but it provides none of the visceral experiences that a true V8 musters. There’s no burble from the exhaust, there’s none of that right-now torque that pins you (and any lucky passengers) in the seat once you nail the throttle and certainly there are no bragging rights if you decide to line up with, say, a Camaro SS or Challenger RT/SRT-8 at a stoplight. What the V6 does enable the Mustang to be is a genuine sports car, comparable with competition such as the Nissan 370Z or Hyundai Genesis Coupe. With the lighter V6 enhancing weight distribution, the Mustang (equipped with the Track Pack option that includes a lower and stiffer suspension, 19″ wheels with summer tires etc) provides an impressive track capability that rivals its competitors regardless of the live axle out back.

The GT on the other hand has a slightly dulled response to the helm when called on to attack corners due to the heavier V8 engine up front, but nevertheless, the lithe weight of the Mustang as compared to the larger Camaro and even larger Challenger allows Ford’s pony car to outperform its primary competition in all aspects. Here, live axle is able to keep up (and in some events, even outperform) independent rear suspension. Who’d have thought? Of course to go along with this new-found prowess, the 5.0 provides the roar and torque that only a V8 can offer. Nail the gas and suddenly it’s the 1960s all over again. 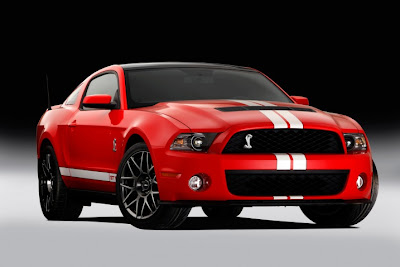 For the extremely power crazed, Ford has recently released a revamped 550hp Mustang Shelby GT500. The engine is essentially an evolution of the same supercharged 5.4 liter unit from the discontinued GT super car, revamped for duty in the Mustang and is an absolute rocket ship. Only here it one-ups the GT motor by producing 550hp and 510lb-ft and blasts the GT500 from 0-60 in 4.1 seconds. Quarter mile? How about 12.83 seconds at 115.75mph? Yes fans, that is near super car territory. Thanks to the use of an aluminum block (the old unit was cast from heavier iron) and other modern touches, the 5.4 is lighter, more powerful and more efficient than the previous motor and allows the GT500 to make better use of the stiffer, re-tuned suspension.

Ford has basically covered all the bases with a Mustang flavor to suit all tastes.

Sure the Mustang is a great car in all these respects, but would I spend my hard-earned money on one?

Ford’s quality and products may have improved over the last few years and I do applaud what they’ve done with the class-leading Mustang. However, the looks just never appealed to me. I am a fan of the old school (a friend of mine used to have a ’60s era Mustang that I fawned over every chance I got) but the retro looks of the Mustang have now bred a sense of…familiarity? I can’t quite pin it down, but despite the recent nip-and-tuck Ford did in 2010, the Mustang still doesn’t have that in-your-face look that sets my heart on fire. To me looks matter and, unless you’re a diehard Ford fan-boy(or girl), compared to it’s rivals, the Mustang just doesn’t cut it. Muscle cars are supposed to be big, brash and cause other drivers to get out the way if one blasts up from behind. To me, the Mustang doesn’t have that. In other words I’d sooner save a little more for a Taurus SHO than spend it on Ford’s pony car.