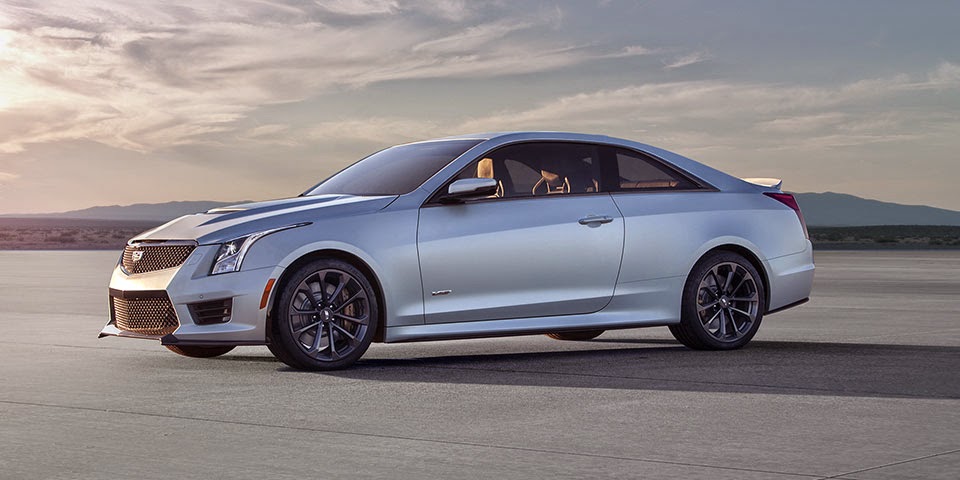 In a previous post, you were introduced to Cadillac’s new assault on the compact luxury sedan market, the ATS. Since its introduction, the well designed and engineered sedan I drove has spawned a coupe version that, while lacking the visual prowess of the outgoing CTS Coupe, still packed the performance and luxury that sees Cadillac meeting the German competition head-on.

And they’re not done yet.

Feast your eyes on the 2016 ATS-V, the instrument with which Cadillac aims to give the BMW M3/M4 and Mercedes C63 AMG a bloody nose. While the standard ATS sedan and coupe are excellent purveyors of the refined ‘Art & Science’ design theme, the V treatment has given the cars an aggressive streak without being garish. Sure they’re designed to be stealthy but next to their tamer kin, the V variants won’t go unnoticed. Elements like a deep front splitter, heat-extracting hood vent, larger cooling brake ducts, quad tailpipes and a duck-tail spoiler along with larger 18″ wheels (more on this) aim to up the ATS-V’s visuals and work particularly well on the coupe (long lambasted for being too tame next to the outgoing CTS coupe’s dynamic persona).

Of course, the ATS-V isn’t all show and no go. Every opening and orifice on the front end is functional with tasks of either aiding downforce or cooling the uprated and tuned version of the 3.6L LF4 twin-turbo V6. Producing an estimated 450hp and 455lb-ft of torque to the rear wheels, this motor features such exotic elements like titanium connecting rods, new titanium turbos, higher flow fuel injectors and wet sump oil system that has been tested at withstanding up to 2 gs of lateral acceleration. A high flow, quad exhaust system announces the motor’s presence (annoyingly with prerecorded sounds played back the sound system). The driver will have a choice of either a traditional six speed manual (hooray!) or GM’s new eight speed automatic (same as in the new Corvette) to shuttle power to the rear end, which itself comes with an electronic limited slip differential to help put down the blown six’s massive power.. The automatic boasts settings that vary response and shift times, which GM says were benchmarked against Porsche’s PDK dual clutch transmission. Interestingly, shift times are boasted at being quicker than the Porsche unit while being able to slur through gears like, well, a proper Cadillac. The six speed manual will feature GM’s ‘no-lift shift’ algorithm and automatic rev-matching for those of us that talk the talk (for the rest of us, the feature can be switched off).

The ATS’ Alpha chassis has been thoroughly altered for V duty, boasting additional rigidity through a stiffened front structure (a hollow aluminum plate that stiffens the engine cradle while also serving as an aerodynamic underbelly tray). A 50 percent stiffer suspension setup at all four corners enhances roll stiffness while third-generation Magnetic Ride Control dampers feature faster reaction times (now altering damping every inch of road travel versus three inches before) while being 40 percent stiffer than before. Of course, road damping can be dialed back for a cushier experience but even at its softest setting, the ride will still be “performance oriented”. On both the ATS-V coupe and sedan, the front tracks are slightly wider than their tamer brethren while the rears are slightly narrower, enhancing turn in and rotation through corners. Wider 18″ Michelin Pilot Sport Cup tires sized 255/35R18 front and 275/35R18 rear are mounted on lightweight forged wheels to decrease unsprung weight at all four corners. Expecting bigger 19″ or 20″ wheel options? Don’t as Cadillac felt altering the suspension balance for heavier wheels would compromise the platform’s excellent dynamics.

Tasked with halting all that power are giant steel 14.6″, six piston front brakes augmented by 13.3″, four piston rear units. Will fancy, shmancy carbon ceramic brakes be optional? According to Cadillac chief engineer Dave Leone, the standard brake setup works so well, that carbon ceramics were deemed as an unnecessary expense. That said, customers shouldn’t expect a dedicated track package as Leone says, the ATS-V is THE track package. To further back up this claim, the exterior visuals have been beefed up in a functional, non-garish way. To cool the blown motor, the grille area has increased by 50 percent with extractors and gills allowing hot air to escape the engine bay. A convincing hood bulge with heat extractor helps to give the LF4 clearance while a deep front splitter, brake cooing ducts, side sill extensions and rear diffuser give the ATS-V presence. An optional Track Pack will be available that adds additional downforce via a deeper front splitter and larger rear spoiler, along with extensions forward of the front wheel wells and deeper side rocker panels.

Inside, Recaro sport front seats will be standard as well as real carbon fiber and suede trim. The Corvette’s Performance Data Recorder will also be available so you can record your Lewis Hamilton-antics. It works by using a small, forward mounted camera and records video and in-car audio to glovebox-mounted SD card. It also records parameters like throttle and steering inputs as well as braking points and lateral acceleration. Unfortunately, Cadillac’c CUE user interface system will also be standard. If you read my earlier ATS entry, you’ll understand that the less said about that infuriating system, the better.

Pricing hasn’t been set as of this writing, but expect the ATS-V to go on sale in late spring of 2015 with a price that competes with the German establishment. With the ATS serving as an excellent base and competing well with the regular  BMW 3/4 Series, the V variant looks set to be the perfect M3/M4 killer. All hail the Star Spangled Banner!