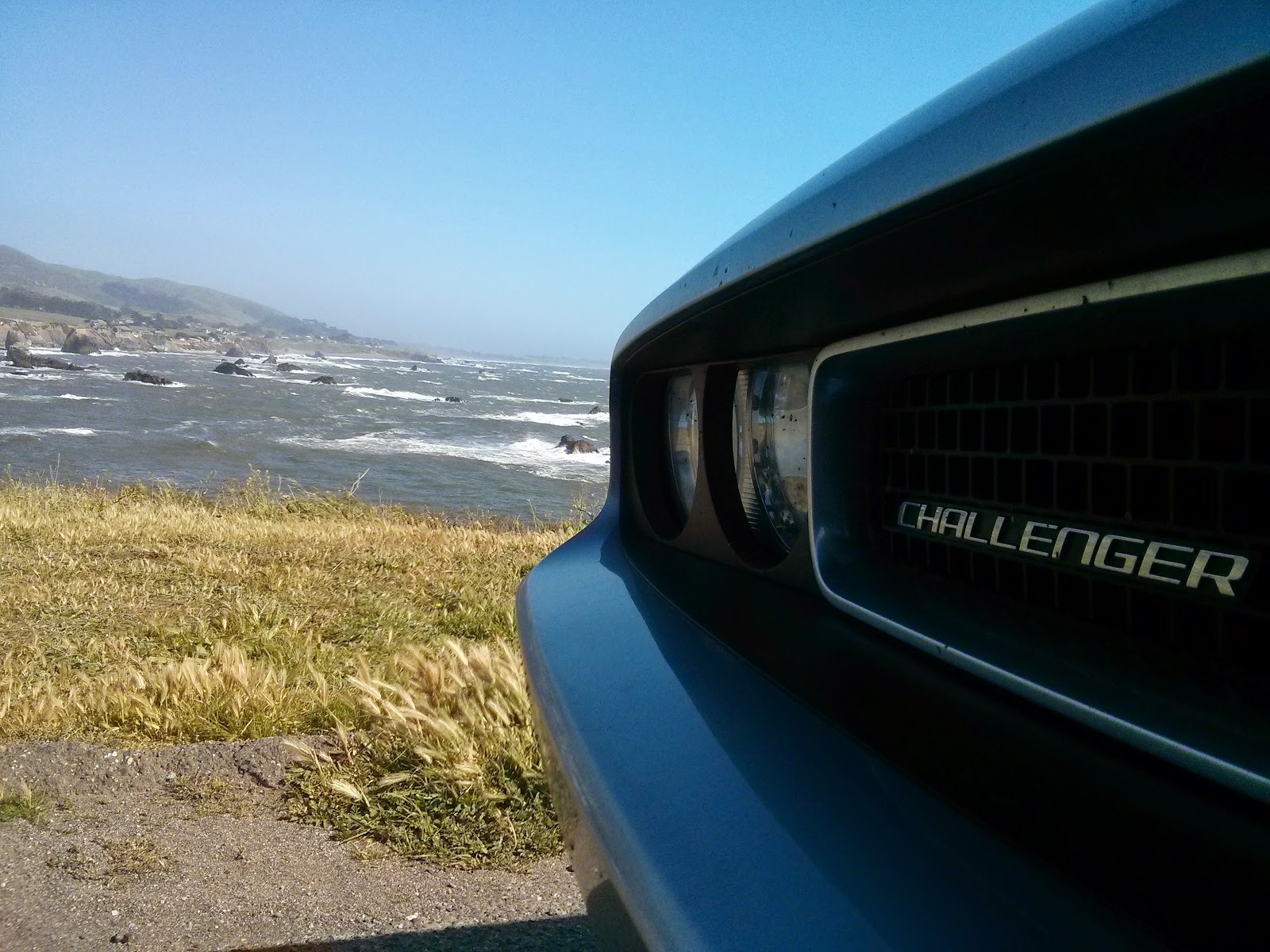 Once again, a hat tip has to be extended to our more-than-gracious Santa Rosa host, Tamara. Not only did she allow us to couch surf for the night, she also pretty much planned our next day as far as sites and eats.

First off, we needed breakfast. Never mind it was already an hour later than we intended to leave (around 11am if you really must know), we were going to make it to breakfast and that was that. Her first suggestion to start the day was a Mediterranean eatery called East West Restaurant. We were greeted by our beautiful and friendly waitress, Christina (please forgive if I misspelled your name if you see this) and, it being a gorgeous day, we elected to eat outside. 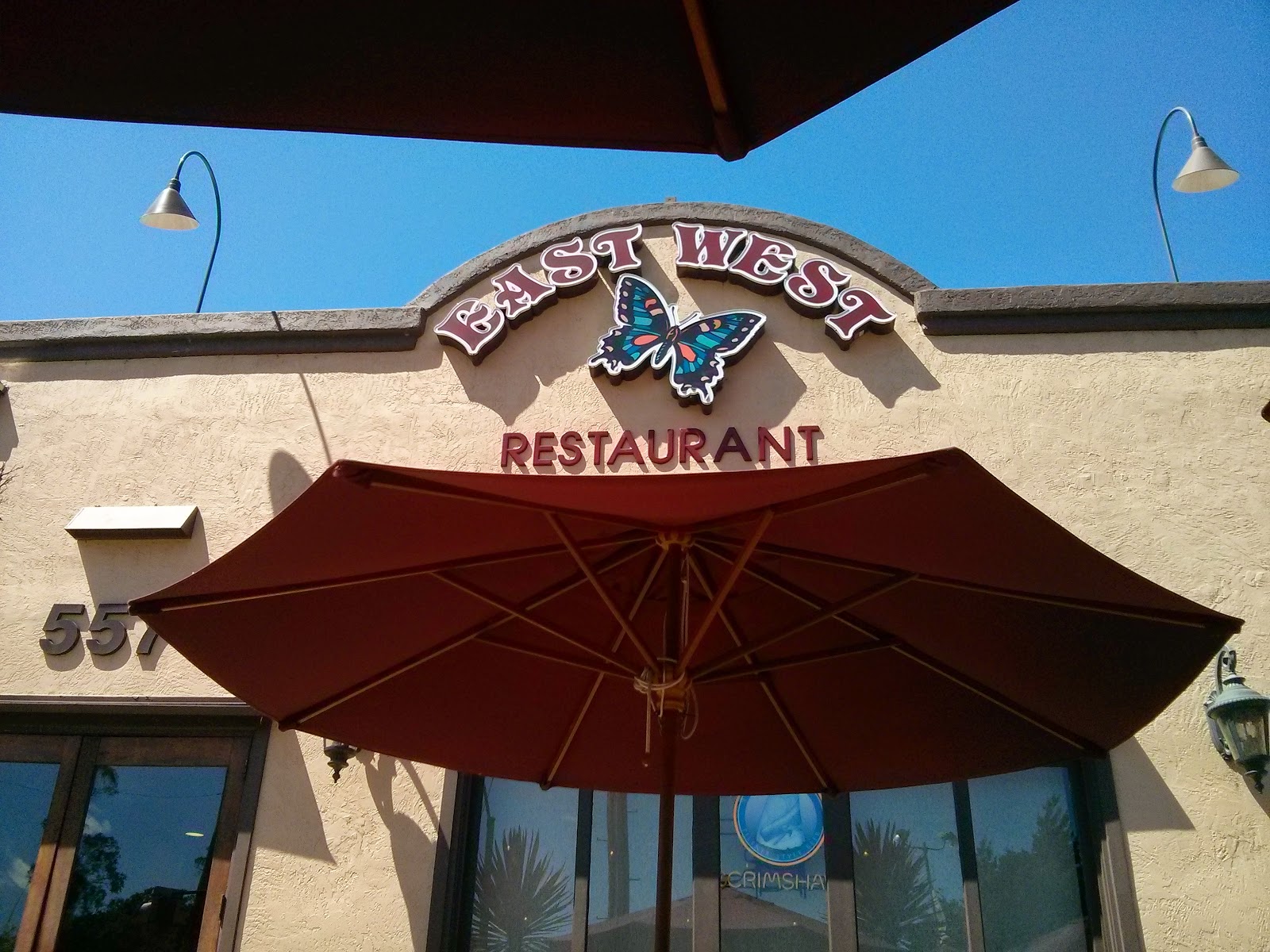 With breakfast on my mind, I opted for the Mediterranean Omelette: a three-egg wonder stuffed with mushrooms, tomatoes, basil, feta cheese and a bunch of other stuff I can’t remember, with country potatoes and sourdough toast on the side. Washed down with Jasmine Chai tea, it was a relatively healthy meal that didn’t leave me feeling…heavy. Roger chose the French Toast combo with scrambled eggs, artichoke chicken sausage (fancy) with some multi-named iced tea. The meal was, in a word, delicious. Along with the great weather and fantastic service, the day couldn’t have gotten off to a more awesome start. After ordering a meal to go, we thanked our waitress and set out south to Tamara’s office to drop off some lunch (hey, it’s the least we could do) then headed west to our first sightseeing stop of the day: the Korbel Winery in Sonoma County. 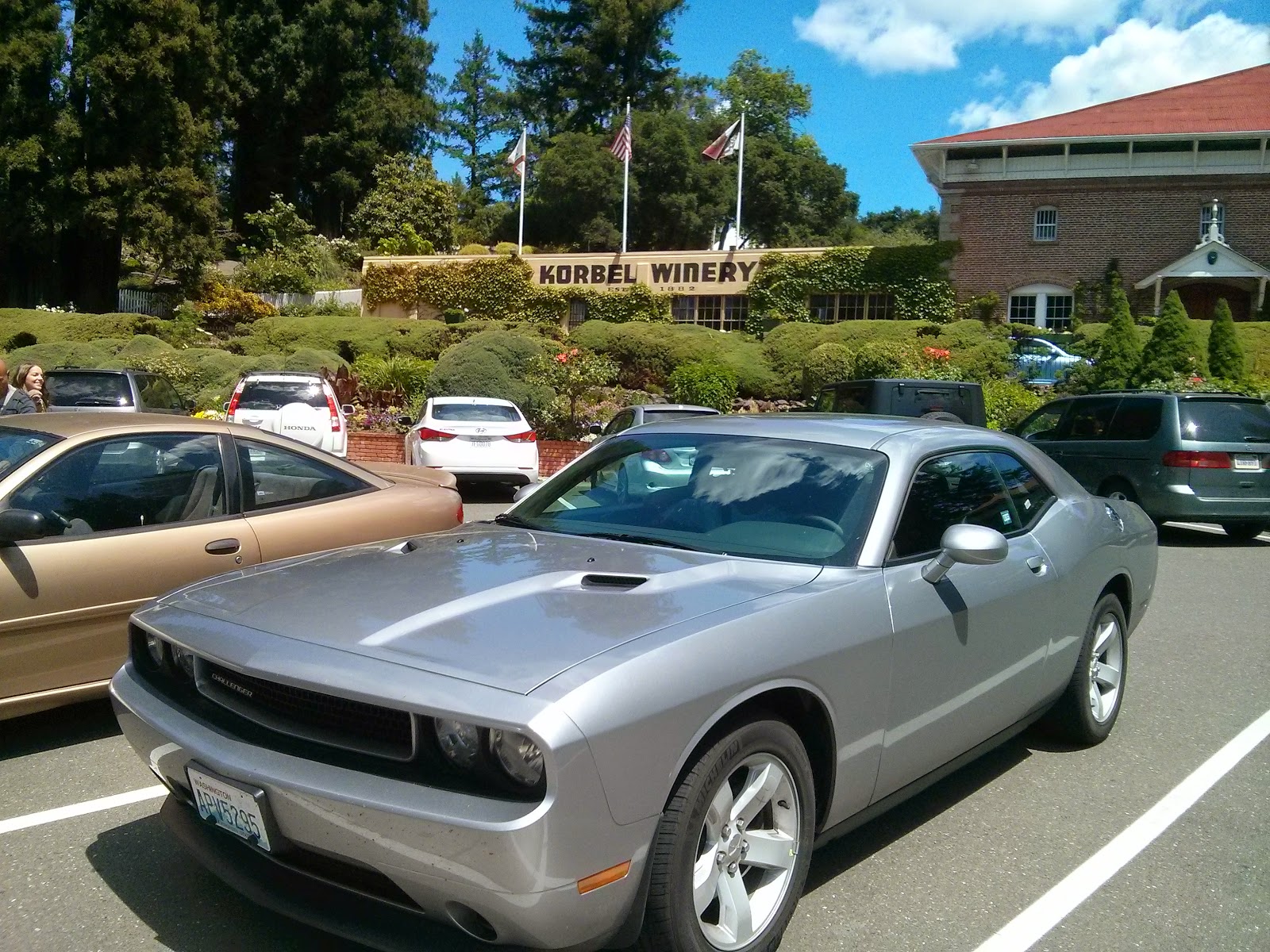 Now, I know what you’re all probably thinking: what’s so special about the champagne we pop every New Year’s Eve? Trust me, so were we, but it turns out there’s over a hundred years worth of history inside that bottle in your cupboard. We were shown a brief video about the history of the winery and then led through the original building used to actually make the wine, as well as shown the time-consuming methods used to blend and bottle the product. At the end of the tour, we were treated to a complimentary tasting of the four lines of champagne made at the winery (we both took part in that last bit) from driest to sweetest. We also learned that Korbel makes much more than just champagne, such as brandy and actual wine. You won’t find them for sale at retail stores however as they can only be purchased at the winery. Hey, believe me, if we could we would, but we’re flying back, so we didn’t. 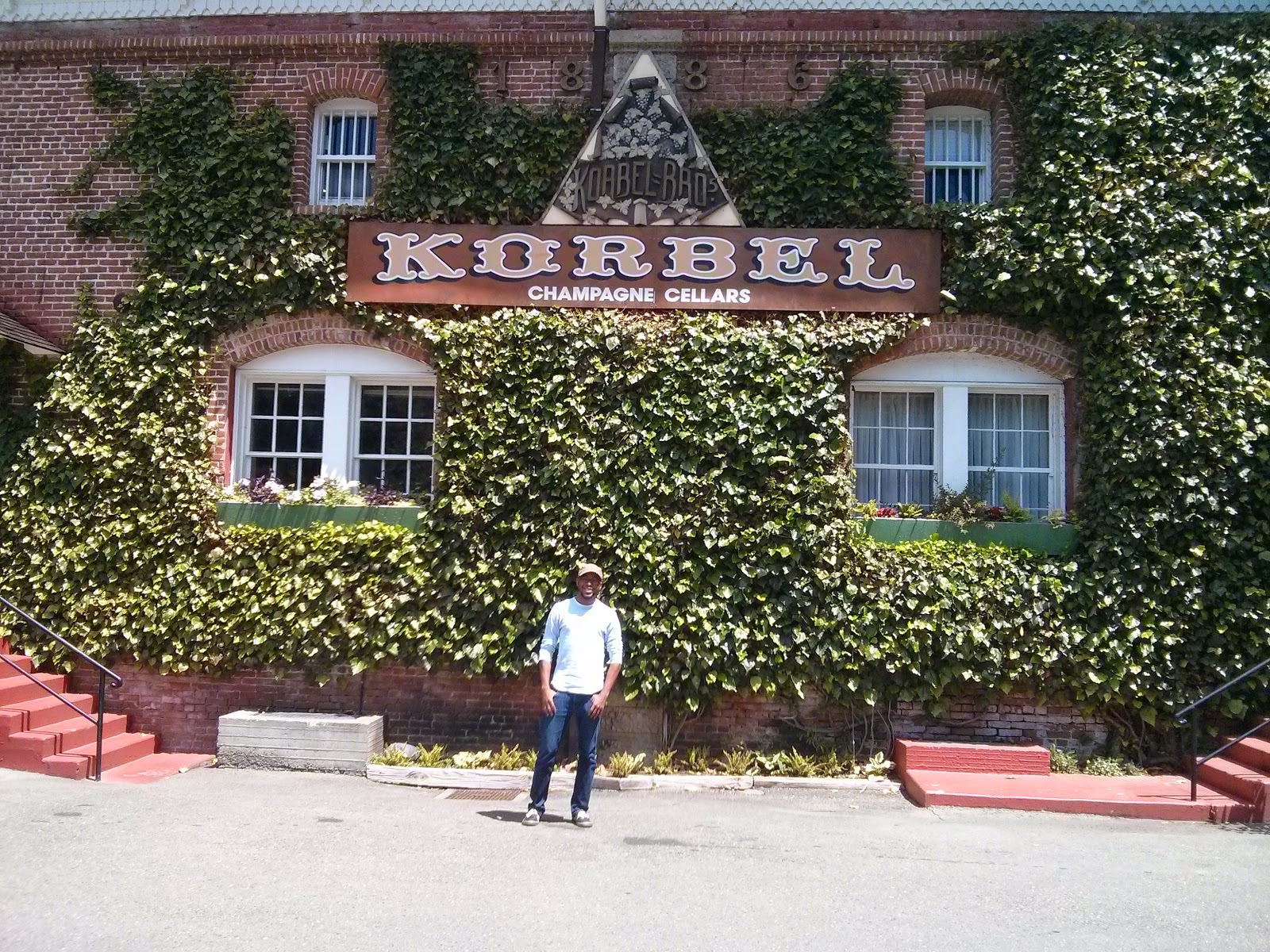 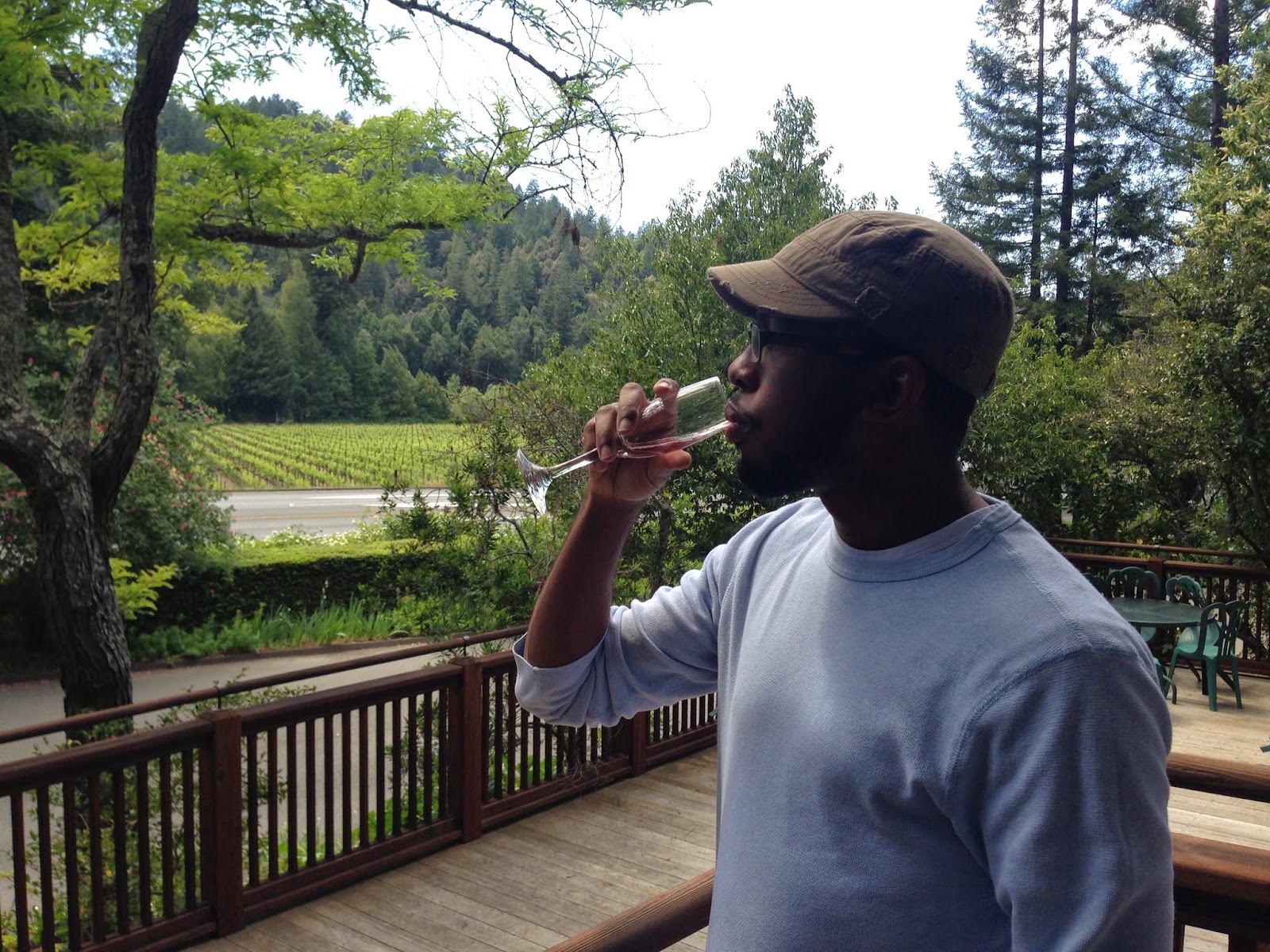 So what were our thoughts? Here ya go:

Following our wine tasting stint, we pointed the Challenger’s nose westward to Tamara’s next suggested stop, the actual west coast, specifically Doran Beach. Taking the 116 road west linked us up to the California 1 aka one part of the famed Pacific Coast Highway. While the road there might not have had the same, hilariously hairpinned and blind curves as the road Roger took the previous night, there was still plenty of turns and braking/accelerating events to make the drive interesting. Of course, the Challenger is a pretty big car, bigger than the Mustang, bigger than the Camaro. As a result, you can’t argue with physics. Instead of deftly swinging the Challenger’s nose through tight turns, I was more herding the big car. The brakes were decently strong and the power from the big V6 was adequate to pull us through the corners. But as Roger alluded to previously, the big failing part is the 5-speed transmission. At anything more than 6/10ths, the Challenger falls over itself and the transmission’s slow response to prods of the go-pedal exacerbates this.  The steering is quick, but the body takes a while to settle once’s the nose starts swinging into the desired direction. Anyway, having never seen the Pacific shoreline (at least enough to appreciate it), once we arrived our collective breaths were taken away. 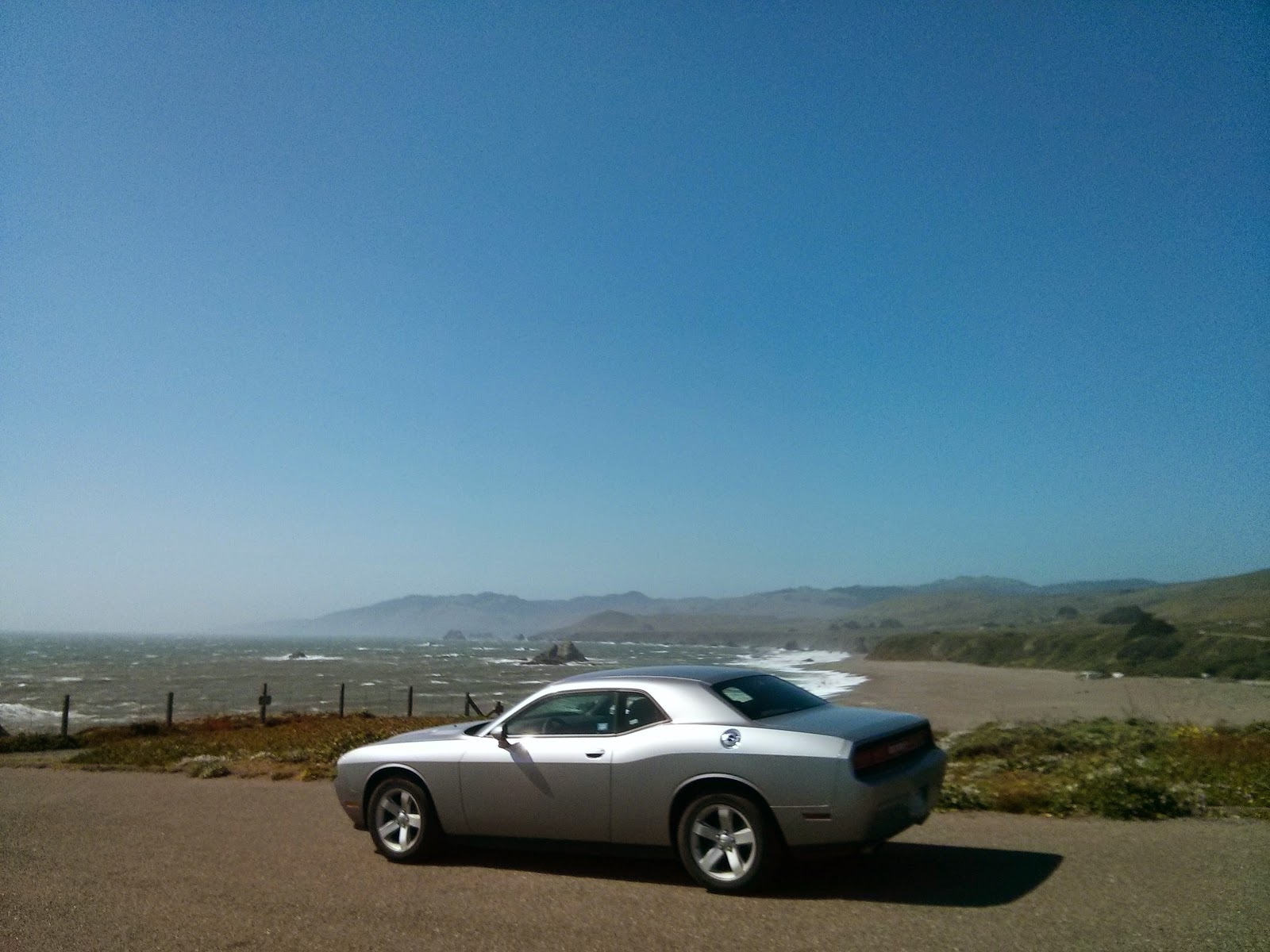 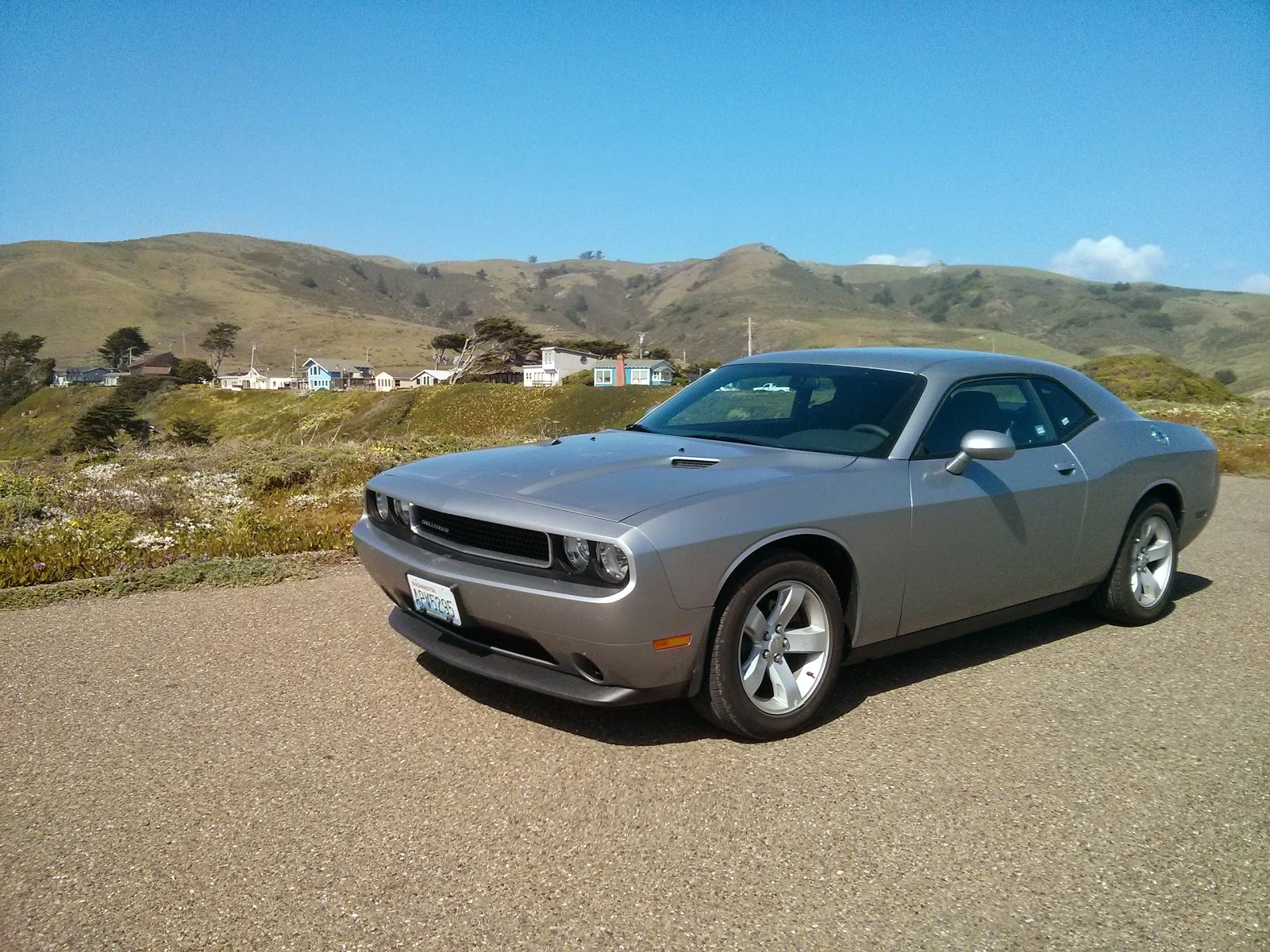 The views were utterly breathtaking. If this is what the Pacific Coast Highway has in store for us a few days from now, we’ll most certainly take it. This, my friends, is what road tripping is all about: going somewhere you’ve never been to see things you’ve never seen. And we enjoyed every flippin’ minute of it. The images don’t do these views justice. It was windy, like 40-50mph windy, the air was cold and salty, necessitating the donning of our jackets. Plus, even though the cliffs we were on were perhaps 100ft above the water, the pounding surf was enough to spray salt water that high up on our faces. And even then we still reveled in the natural wonder. It had us both feeling…exhilarated. 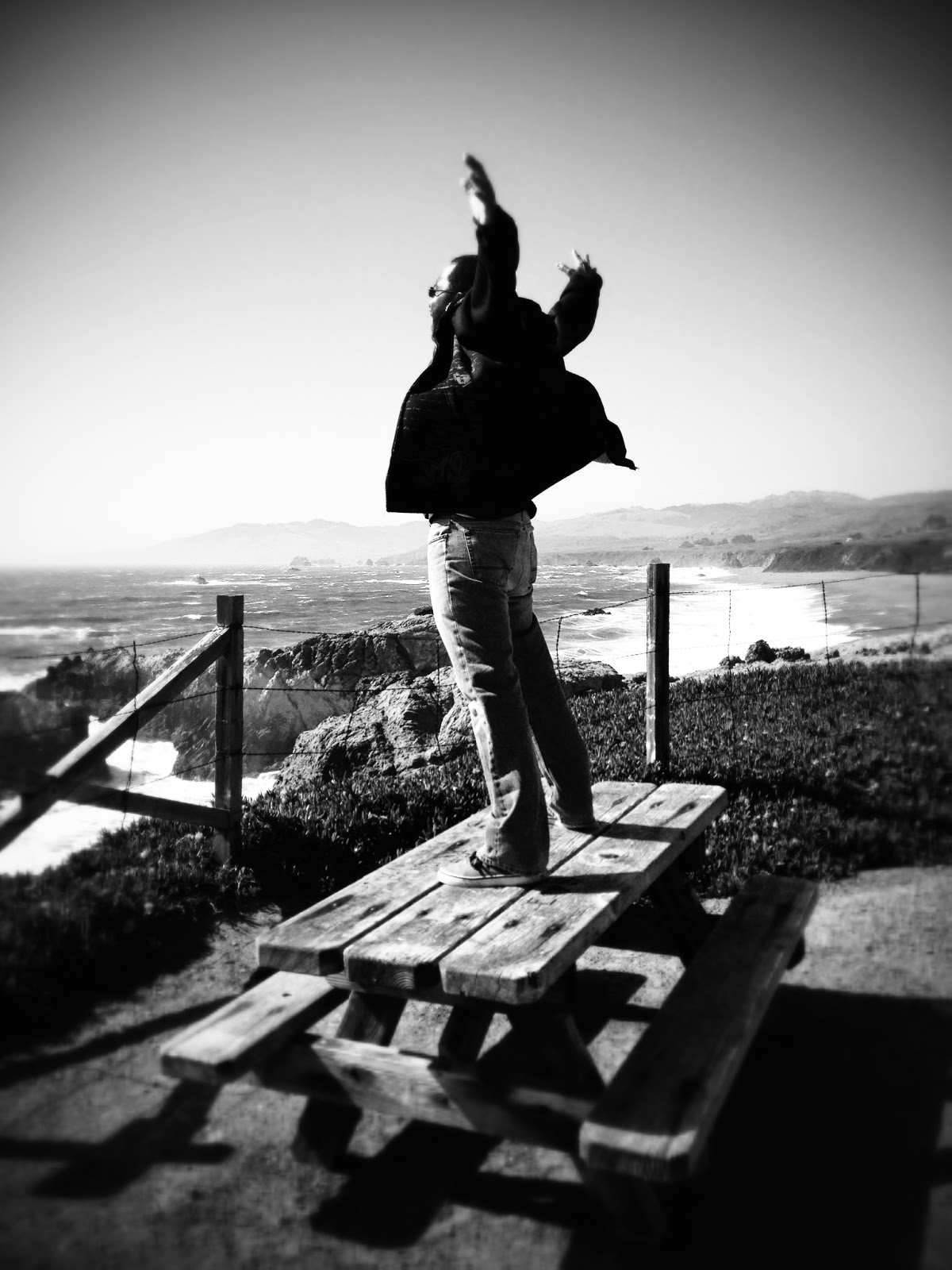 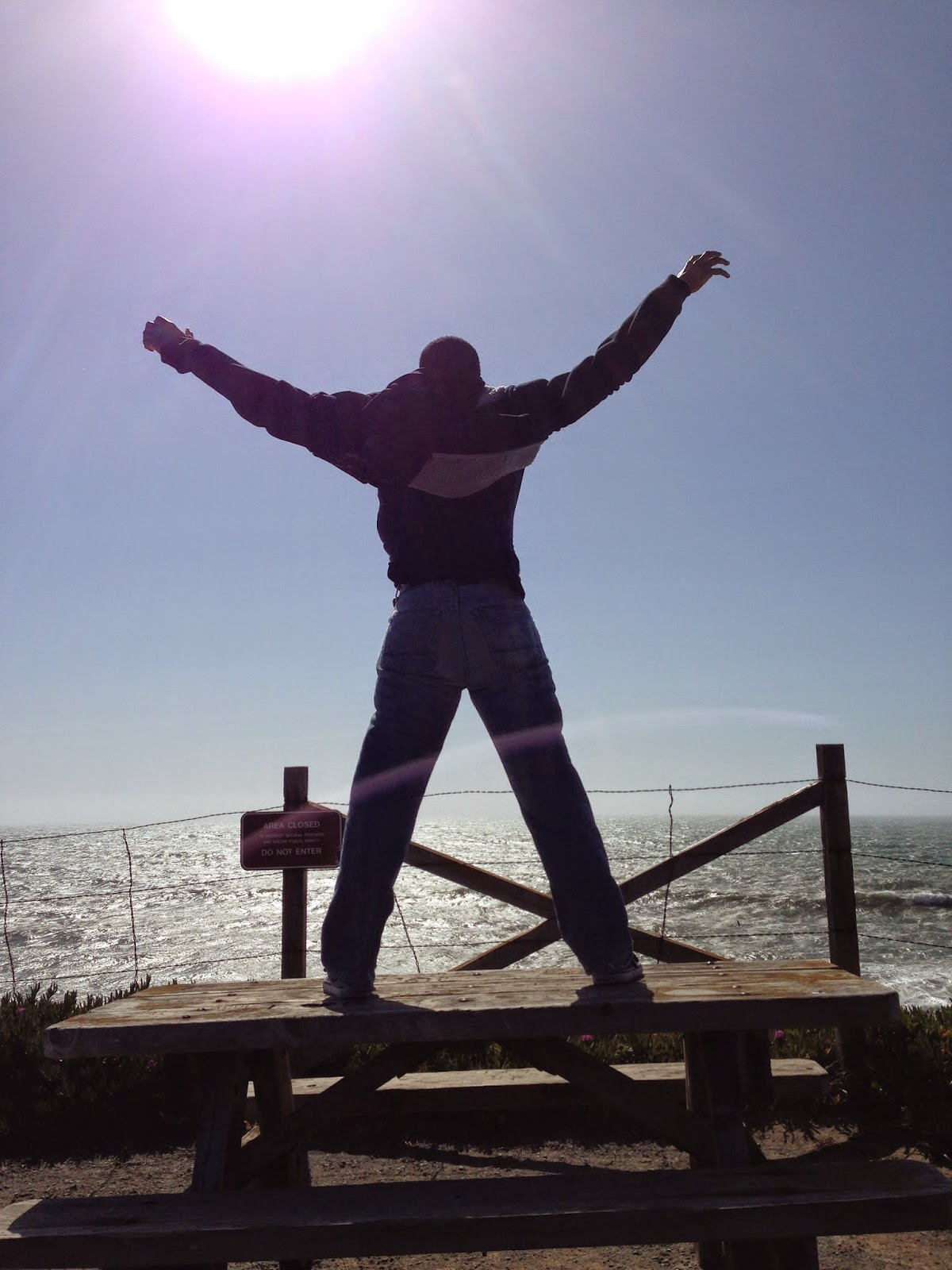 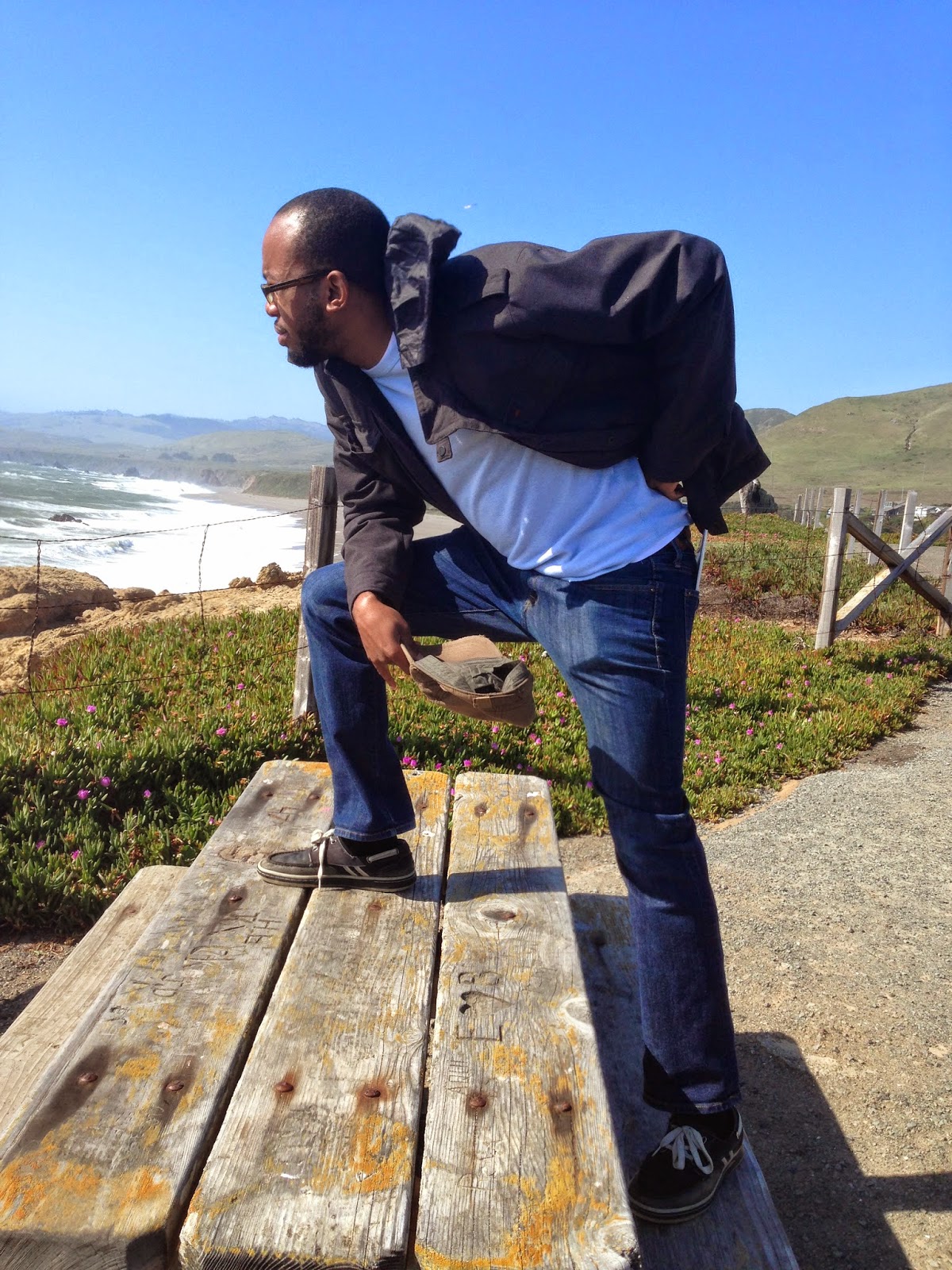 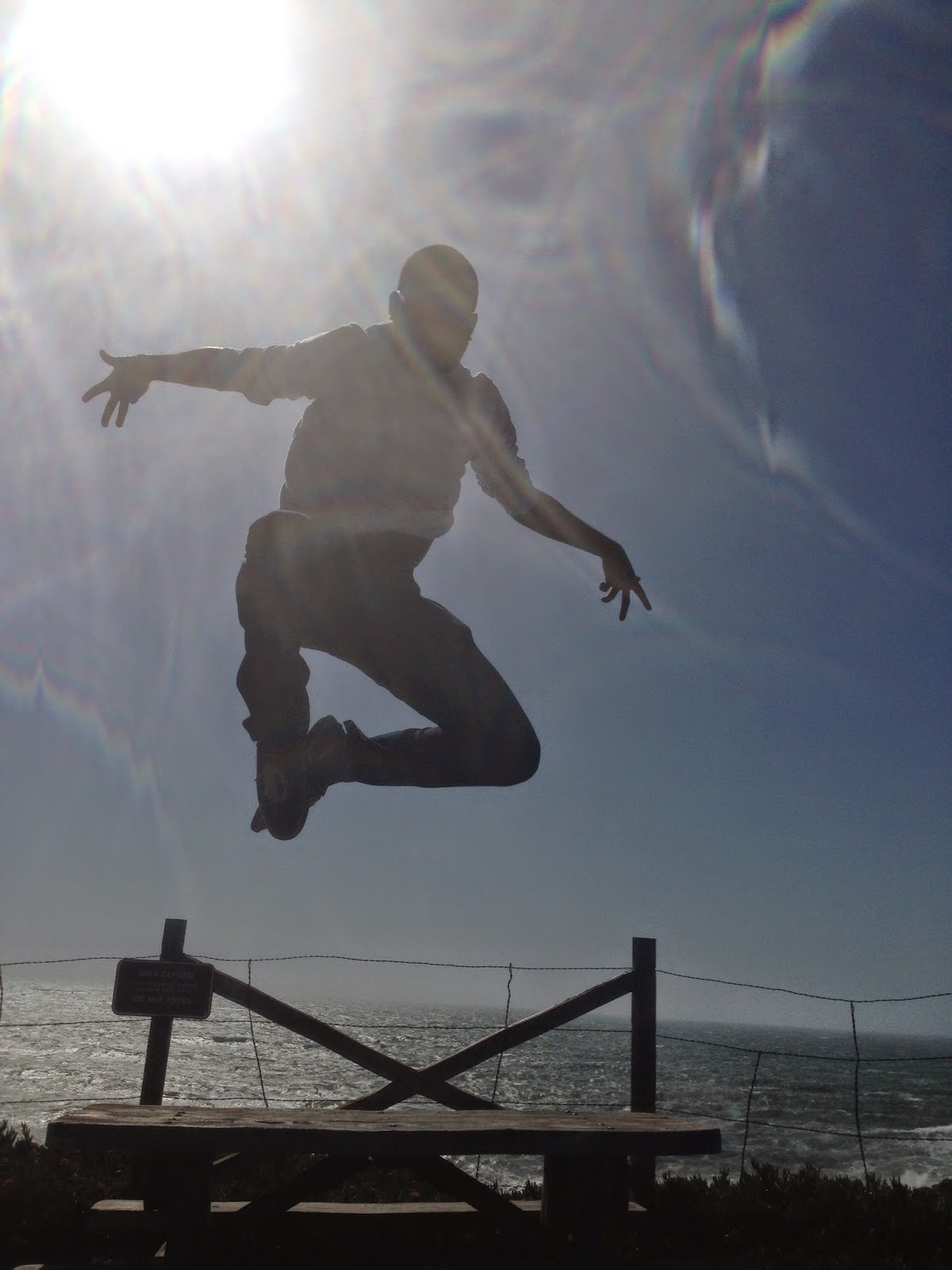 There are a ton more photos and video we took, a lot more than I can post at the moment. You can catch some of the videos posted here as well as others on my YouTube channel. After a an hour or two of soaking in the views, we made our way to the third leg of our Santa Rosa excursion to the town of Sebastopol where we cooled our heels at the Russian River Brewing Company. We wanted to take the tour but elected instead to just rest a bit. Toasting to a pretty awesome day thus far, we chowed down on some chicken wings then started the southerly drive to our date with San Fransisco. It was around 6:30pm when we arrived at the Golden Gate Bridge (we were annoying our friends Tiffany and Kerrie on the phone at that point so not many images were taken at this particular milestone). Yes folks, we’ve finally made it to the town of cable cars and Rice-A-Roni. We were pretty beat but knew one of the first things to do was update you guys on our trip since we’ve missed a few days. You can read all about Day Four here and since we’ve just completed Day Six and our tour of the city, that update will be posted soon. That night we felt peckish so we made a late night run to an In-N-Out Burger joint a few miles away. No frills is how I’d describe the place and the food. The ingredients were fresh and the burger patties were well cooked. Our bellies full, we headed back to our staging area (hat tip to Phil at airBnB for the comfortable room!) to rest up for the next day’s activities.
The trip has been pretty spectacular so far.