Not only does Roger take the wheel of the Challenger this time around, he also takes the reins to the blog for this update (hey, he needs to share his perspective as well too, right?) 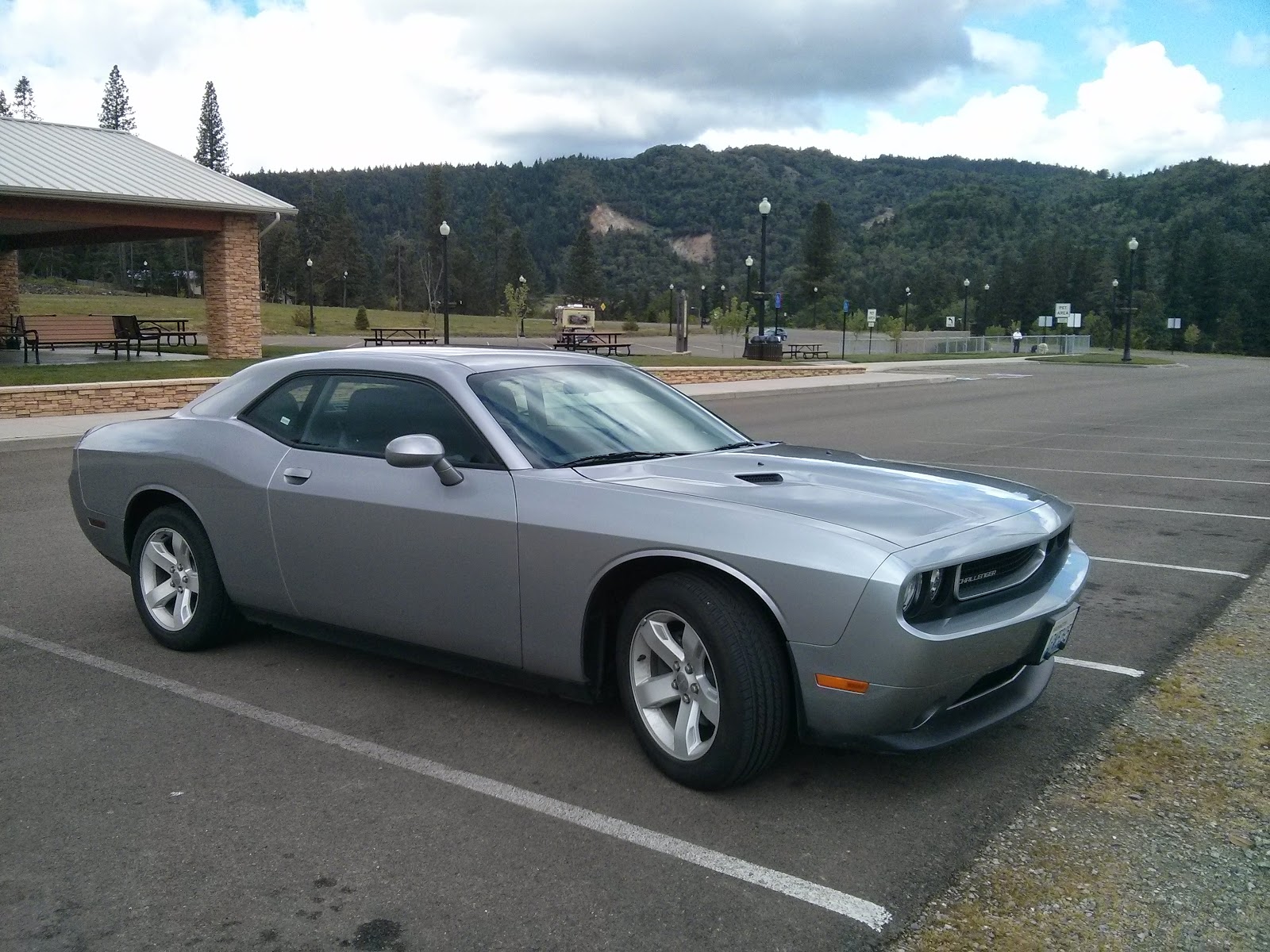 God bless Marlon for staying up so late to write the last blog post. I wish I had his determination, then maybe I would have finished blogging about my trip to Japan last year.

Anyways, I’m taking over just for this one time, easy now since we’ve pretty much fully acclimated to our current time zone.

It wasn’t until the morning when we woke up that we realized just how damned tired we were from all the activity in Seattle and Portland earlier in the day. That, and the beds at the Holiday Inn Express in Eugene were flippin’ fantastic. We managed to somehow crawl out of bed in time to take advantage of the free breakfast included with our stay and check out before noon.

We spent the first part of the day taking a self-guided tour of the University of Oregon’s campus (our hotel was conveniently located right across the street).  As a proud University of Florida alumnus, I simply had to check the place out and compare it to my home campus in Gainesville. I will say this- Phil Knight’s money is plain to see in all the athletic program’s facilities, but everywhere else… let’s just say not so obvious. Overall my impression of the campus was “mehhh”.  One building that wasn’t built yesterday with Nike money that was really impressive was the Museum of Art. Granted, we didn’t go inside the building, but from the outside the gothic touch to the architecture was rather fetching, and helped the building stand out from its relatively drab neighbors.  As a gesture of respect to our fellow D1 competitors, I went around Chompin’ in front of as many major landmarks on the campus as I could: 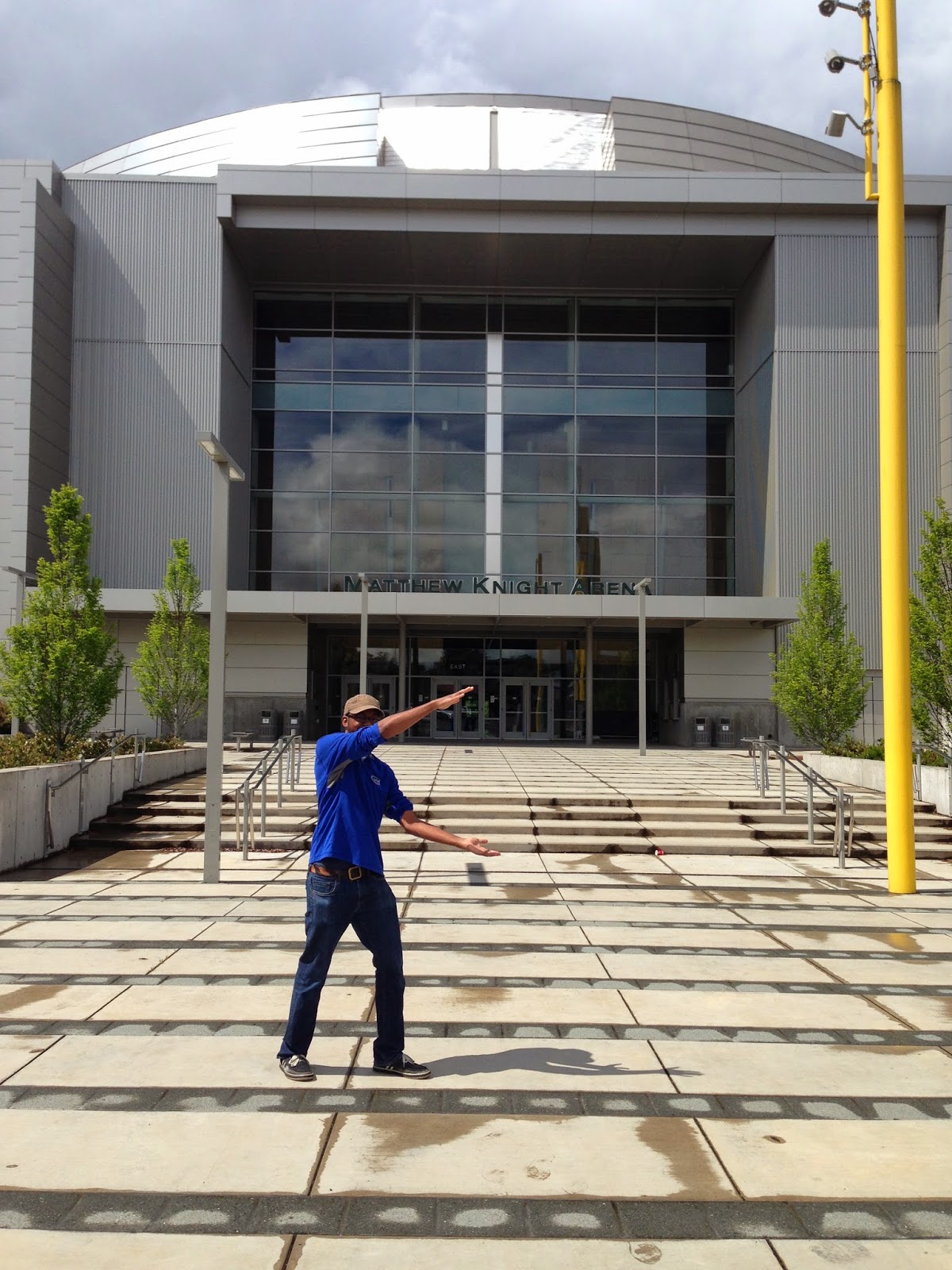 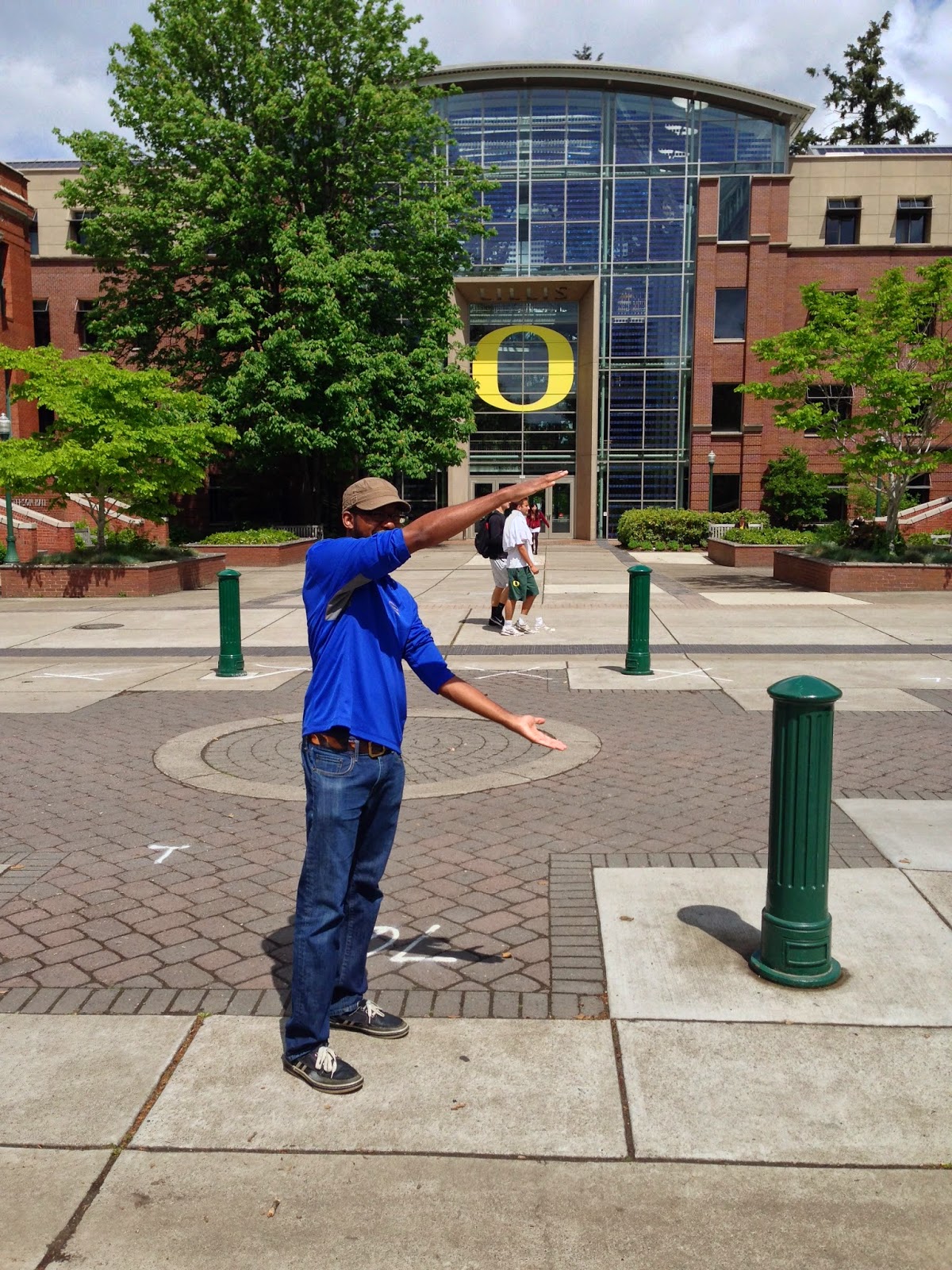 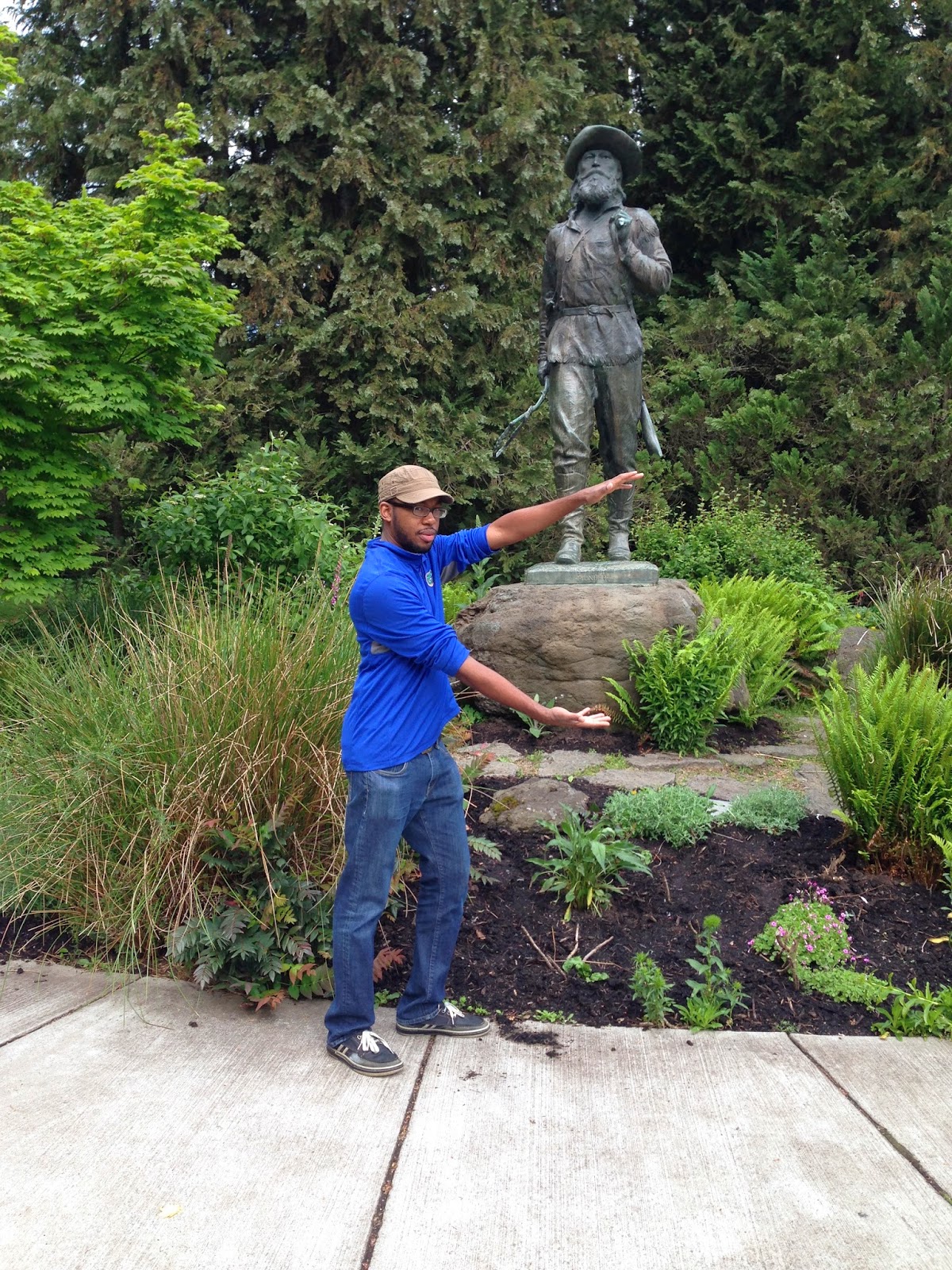 I didn’t chomp the museum; that would have been disrespectful (and I liked it).

After we got our fill of dirty looks sent our way (and a couple head nods from peeps who know what the heck is up) we stopped by the Duck Store just off the main campus to pick up a keepsake- Leninade!

Overall Eugene and Gainesville have a lot in common as cities built more or less around the flagship universities of their respective states- there are the schools, and not a whole lot else- but the nature surrounding them is pretty sweet.

We probably stayed in Eugene a little too ducking long though (sorry, couldn’t resist), so when we finally hit the road it was almost 1:30pm local time. We were a little behind our VERY loose schedule. From this point on we had an almost 8 hours total of driving time ahead of us to get to our base camp in northern California. I took the wheel for this leg of the trip.

Thankfully, the ride to the border was anything short of boring- it was amazingly picturesque with fairly sharp changes in grade and temperature. We spent a good portion of the trip to Medford, OR (where we made our first pit stop) dodging trailers and popping our ears.  We finally made it to our exit and drove towards downtown looking for somewhere to eat.

One thing we probably haven’t mentioned earlier is that this trip is almost as much about food as it is about the road itself. With that we shall introduce Vinny, owner of Paisans Pizzeria.

Marlon and I ordered a couple slices of pizza with garlic bread and a pair of lemonades to wash it all down.  Specifically, I had a meat pizza slice that was loaded- no, gloriously burdened with what must have been six different types of meat. Marlon went a bit more traditional with a slice of pepperoni that he couldn’t have finished faster if he was being chased by hyenas in the Serengeti. The real star of the show though, surprisingly was the garlic bread. My friends, this was no mere garlic bread, with Italian bread toasted with plain old garlic, salt and oil/butter. No, this was something more, with freshly grated parmesan, oregano, basil, extra virgin olive oil, and some other stuff that added up in flavor to more than the sum of its humble ingredients. Toss in what was clearly the BEST DAMN MARINARA SAUCE IN THE WORLD for dipping, and it’s a wonder why he hasn’t franchised this place. If you like pizza and you happen to be in Medford, check this place out.

We cleaned our plates, high-fived the owner on the way out (greasy hands and all) and hopped back in our steed to continue our journey.

We crossed the border into California not long after and, besides gazing at the awesome beauty of the terrain, realized just how severe the state’s water shortage was. Approaching just north of Lake Shasta, while taking in the scenery, something about the lake itself seemed…well, out of place. Then it hit us: the water line was waaaaaaaaaaaaay below where the tree line began. I’ll let the video below tell the story:

Shortly after we shot the video, we did some research and what we found was pretty shocking. The landscape was literally changing before our eyes and we witnessed it for ourselves.

After a having a good long gawk, we hopped back into the steed and noticed that we were not going to make it to San Francisco that night, which was probably for the best anyway and not really our intention to begin with. After a quick call to our friend in Santa Rosa (about an hour north of San Francisco) with the hopes of having a spot to crash for the night, we continued on as darkness fell.  Once we had our confirmation from Tamara (shout outs to Tam’ra :-)), we were faced with a major decision- continue on I-5 (which was the major highway we had been on since we left Seattle), or divert west along a 2 lane highway with no street lighting that goes into the thickly forested mountains of Northern California, filled with deer and bears and probably wolves or some shit. We stopped for gas and contemplated our next move. Marlon leaned towards staying on the highway, but ultimately left the decision to the man at the wheel. I of course gave in to my more adventurous side and decided to head for the hills, into the unknown where nothing but the blackness of night laid ahead for certain.

Now, I was not sure what I had gotten us into, but WHOOOOOOOT it was fun!  We finally had a chance to put the Challenger through its paces as a supposed sports car:

We somehow made it through all those twisties without Marlon tossing his cookies and landed at our new base camp in Santa Rosa safe, sound and utterly sapped. After talking over the plan for the next day with some great input from our most gracious host (and some local wine- we were in Sonoma County after all) we tapped out. The next day was going to be epic…